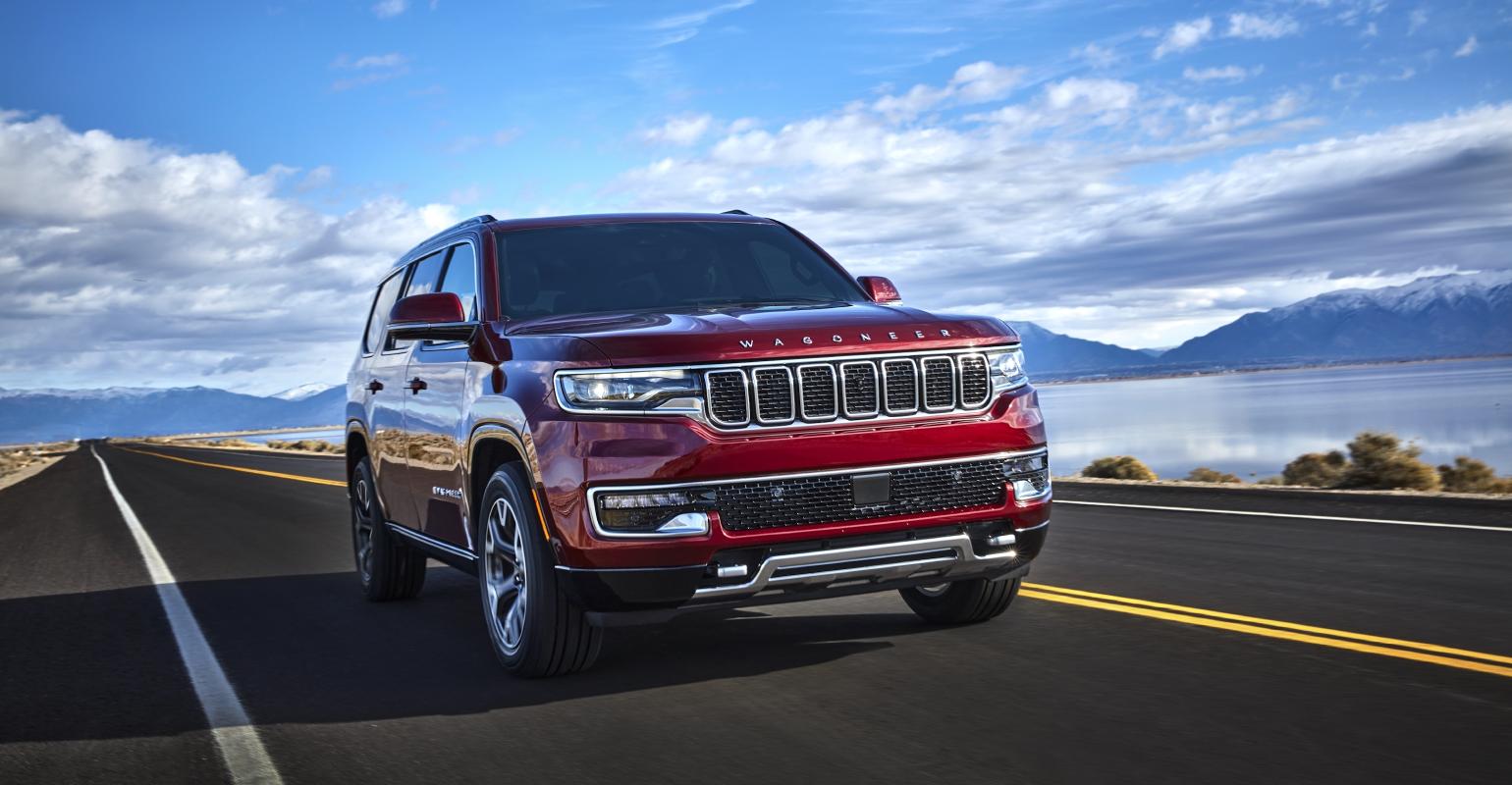 Jeep has made its long-anticipated entry into the full-size three-row SUV market with the introduction of the body-on-frame, truck-based Wagoneer and Grand Wagoneer SUV models.

While the new Grand Cherokee L provides three-row passenger-carrying capacity, the Wagoneer models have additional elbow room for bigger families and 10,000 lbs. of towing muscle to help take campers and boats to the great outdoors.

When General Motors introduced the second-generation Chevrolet Tahoe in 2000, the company’s product chief, Bob Lutz derided the Jeep Grand Cherokee as “a car,” in comparison to the full-size, body-on-frame Tahoe.

Now, at last, Jeep has a response to Lutz’s legitimate point that cramped unibody Grand Cherokees were not ideal tow vehicles for bulky trailers. Now, the Wagoneer and Grand Wagoneer simplify the hitching process with available air suspension.

The optional air suspension lowers the Wagoneer all the way down onto the bump stops, and then the driver backs up to the trailer’s coupler using the Trailer Hitch Line Up Assist back-up camera, and the suspension rises again to put the ball directly into the coupler. No fuss, no muss.

“You never have to crank on your trailer again,” boasted Jeep vice president, North America, Jim Morrison. “It is fantastic technology!”

The Wagoneers are four inches longer than a current Tahoe and roll on a three-inch-longer wheelbase. The Jeeps top the Tahoe’s 8,400-lb. maximum towing capacity by 1,600 lbs.

They have the muscle to pull 10,000 lb. trailers thanks to their famous Hemi V8 powerplants underhood.  The Wagoneer features a Hemi 5.7-liter V-8 engine that is rated at 392 horsepower and 404 lb-ft. of torque and fitted with the next generation of eTorque 48-volt hybrid with fuel-saving technologies, including cylinder deactivation and Variable Cam Timing (VCT) as standard equipment.  The Grand Wagoneer gets a 6.4-liter Hemi delivering 471 horsepower and 455 lb.-ft. of torque. Both engines are backed by a TorqueFlite eight-speed automatic transmission.

The frame underpinning all of this incorporates high-strength steel to improve its rigidity. Its side rails are fully boxed and the frame includes 6,500 welds in total. The resulting stiffness helps smooth the Wagoneer’s ride as well as providing a solid foundation for towing big trailers.

Of course, as Jeeps, both Wagoneers include all-terrain all-wheel-drive systems that promise to take drivers to their remote destinations and to bring them back again.

The systems are Quadra-Trac I, Quadra-Trac II, and Quadra-Drive II, which are abetted by an available Quadra-Lift air suspension and Selec-Terrain traction management system. Because these terms seem confusingly similar for products that all deliver power to all four wheels, here’s the explanation of their differences and capabilities.

Quadra-Trac I delivers full-time four-wheel drive without any switches to push or levers to pull using a lightweight single-speed transfer case.

The Quadra-Trac II’s two-speed transfer case uses input from a variety of sensors to determine tire slip at the earliest possible moment and takes corrective action. The system also uses throttle to anticipate quick movement from a stop and maximizes traction before tire slippage occurs. When wheel slippage is detected, as much as 100 percent of available torque is instantly routed to the wheel with the most traction.

The Quadra-Drive II system has a rear Electronic Limited-slip Differential (ELSD) to instantly detects tire slip and smoothly distribute engine torque to tires with traction. In some cases, the vehicle will anticipate low traction and adjust in order to proactively limit or eliminate slip.

The five positions each have their own characteristics to optimize the Wagoneer for the task at hand. “Auto” automatically adapts to any on- or off-road situation.

“Rock” uses the Quadra-Lift air suspension system to lift the Wagoneer to its maximum height of 10 inches, while the transfer case, differentials, and throttle coordinate to provide low-speed control.

The “Snow” setting adjusts traction for ultimate performance over snow-covered roads. And

“Sand/Mud” tweaks the traction control and Quadra-Lift for sensitive response to wheel spin, with the torque tuned for optimal performance in sand or mud.

In the nascent SUV boom of the 1980s, Jeep's wood-sided Grand Wagoneers were commonly seen in tony neighborhoods, where they were commonly adorned with a wreath on the grille during the Christmas season.

The new Wagoneer and Grand Wagoneer aim to reclaim the mantle of preferred people mover of the country club set. “It is all about American premium,” explained chief design officer Ralph Gilles. “It is done the American way.”

This is especially true of the Grand Wagoneer, whose cabin is awash in wood, leather, and metal. Passengers will be occupied by the imagery displayed on 75 inches of video screens, which includes content provided by Amazon Fire TV for Auto, an industry first.

When the Wagoneer and Grand Wagoneer reappear at the country club parking valet line, the attendants will wonder where it has been all these years!