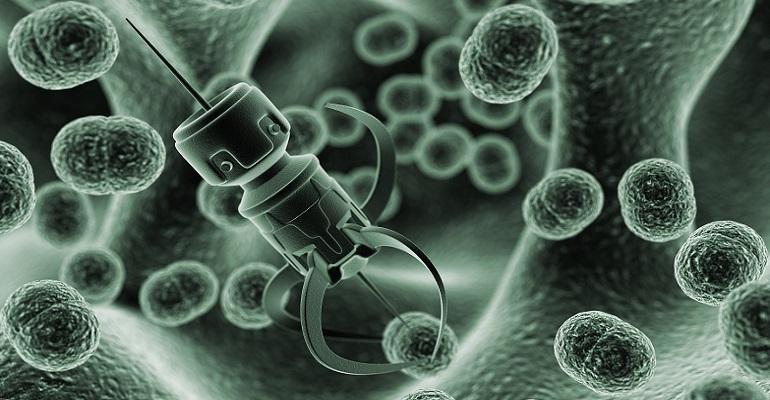 Driven by sunlight, tiny, self-propelled catalysts can swim up to pieces of plastic waste and dismantle them.

Researchers have come up with a new solution to the microplastic problem that is plaguing the world’s environment with the development of sunlight-driven robots that can attack and take apart tiny pieces of plastic.

A team of scientists at the University of Chemistry and Technology in Prague has developed microrobots that can swim or otherwise propel themselves up to pieces of microplastic, attach themselves to them, and break them down. 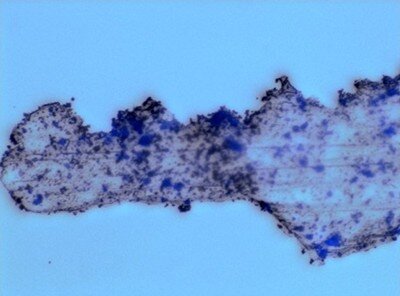 Metallic microrobots (dark blue dots) colonize a jagged piece of microplastic under visible light, breaking down the plastic into smaller molecules. Researchers in the Center for the Advanced Functional Nanorobots in the University of Chemistry and Technology in Prague developed the tiny, self-propelled machines.

Calling the state of microplastic in the environment “a scary wake-up call considering the potential risks of microplastics for humans and marine systems,” the team—led by Professor Martin Pumera, director of the university’s Center for the Advanced Functional Nanorobots —devised a new way to use sunlight-driven photocatalysis, a known strategy for plastic degradation, researchers said in the abstract for a paper on their work in the journal ACS Applied Materials & Interfaces.

Historically, even though photocatalysis is an efficient strategy for breaking down plastic, it has not been easy to get the compounds necessary to facilitate an interaction with microplastics. Other challenges to this process have been low solubility, precipitation, and aggregation of the photocatalysts.

To solve this problem, the team aimed to create “a sunlight-propelled catalyst that moves toward and latches onto microparticles and dismantles them”—in other words, microrobots that can approach microplastics on their own and take them apart.

Microplastics occur when larger pieces of plastic begin to break down into microscopic pieces that become integrated into the natural environment, both in the world’s oceans and on land. The smallest of these can be less than 5 millimeters in size, making them nearly impossible to pick up and remove. In addition, these tiny pieces can adsorb heavy metals and pollutants, which can do harm to humans or animals if they are accidentally consumed.

To transform a catalytic material into light-driven microrobots that can attack these microplastics, researchers began with star-shaped particles of bismuth vanadate 4–8 micrometers wide, and then evenly coated them with magnetic iron oxide. This created microrobots that could swim down a maze of channels and interact with microplastic pieces along their entire lengths.

Propelled by visible light, the robots attached themselves to four common types of plastic, researchers found. The team would then illuminate pieces of the four plastics covered with the microrobot catalyst for seven days in a dilute hydrogen peroxide solution.

This process caused the plastic to lose 3 percent of its weight and also transformed the surface texture of the microplastics from smoot to pitted, researchers reported. In addition, small molecules and components of the plastics were found in the solution that was leftover from the submersion of the microrobots in it.

“The photocatalytic robots are able to efficiently degrade different synthetic microplastics, particularly polylactic acid, polycaprolactone, thanks to the generated local self-stirring effect in the nanoscale and enhanced interaction with microplastics without using any exterior mechanical stirrers, typically used in conventional systems,” researchers wrote.

The results of their experiments with the self-propelled microrobots pave the way toward the development of larger systems that can capture and degrade microplastics in locations that are difficult for humans to reach, such as deep in the ocean or even in the ice of Antarctica.

TAGS: Plastics and Polymers Renewables/Sustainability University of Chemistry and Technology in Prague ACS Applied Materials & Interfaces
0 comments
Hide comments
Related
You Might Like