HomeAutomationTime Wasted at Traffic Lights Is Astounding. You Could Get Some of it Back
Recent
Automation
Mercedes C 111 Was Futuristic Perfection
Jan 31, 2023
BlackBerry’s Ivy Software is Growing
Jan 19, 2023
Are Engineers Still in Demand?
Jan 18, 2023
Engineering Job Market Insights for Managers in 2023
Jan 27, 2023
Is Machine Vision Surpassing the Human Eye for Accuracy?
Jan 30, 2023
Honda Moves on from VTEC
Jan 27, 2023
5 Tips for Learning Rust for Embedded Systems
Feb 03, 2023
Uniting Engineers and Marketing Teams During Product Development
Jan 30, 2023

Time Wasted at Traffic Lights Is Astounding. You Could Get Some of it Back 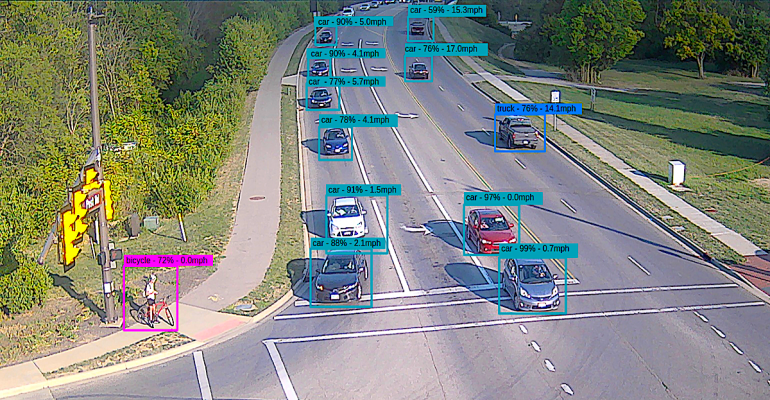 The NoTraffic AI Optimization Engine identifies road users spotted by the connected sensor unit.
Artificial intelligence promises to save $50 million in time lost at traffic lights in one county alone.

Just how much time has been lost as a result of the shift from live traffic cops directing intersections to the much cheaper alternative of automated traffic lights has been illustrated by a test of artificial intelligence applied to an Arizona intersection that promises huge gains in time saved for drivers.

Palo Alto, California/Tel Aviv, Israel-based NoTraffic is testing what it says is the world’s first autonomous traffic management platform and the early results reveal how much wasted time there is to be recovered at traffic lights.

The company conducted a product validation study at an intersection in Arizona’s Maricopa County, which is the fastest growing county in the country and has a population of 4.5 million. Stated goals for the project were to reduce total delay time for all road users, vehicles, and pedestrians, to improve the intersection’s Level of Service (which is a benchmark of average delay time), and to maintain detection accuracy and reliability to improve safety for all road users.

The results from a single week of operation at a single intersection were eye-opening, and projecting those results across 170 intersections in the rest of the county for an entire year underscores the potential value of AI in returning the ability for traffic signals to dynamically respond to real time conditions rather than running on a clock and responding to triggers.

The intersection’s average delay time fell from 29.50 seconds to 13.65 seconds and cross traffic delays fell from 26.83 seconds to 12.38 seconds. Pedestrians had to wait 42.21 seconds before and saw their delay reduced to 33.06 seconds.

The system watches the intersection with a camera that is connected to the on-site computer that NoTraffic dubs an “AI Optimization Engine” via wifi and to NoTraffic’s central virtual management center via an LTE wireless connection. The AI Optimization engine also connects to the virtual management center over wireless LTE and it is hard wired directly to the traffic signal’s existing controller. 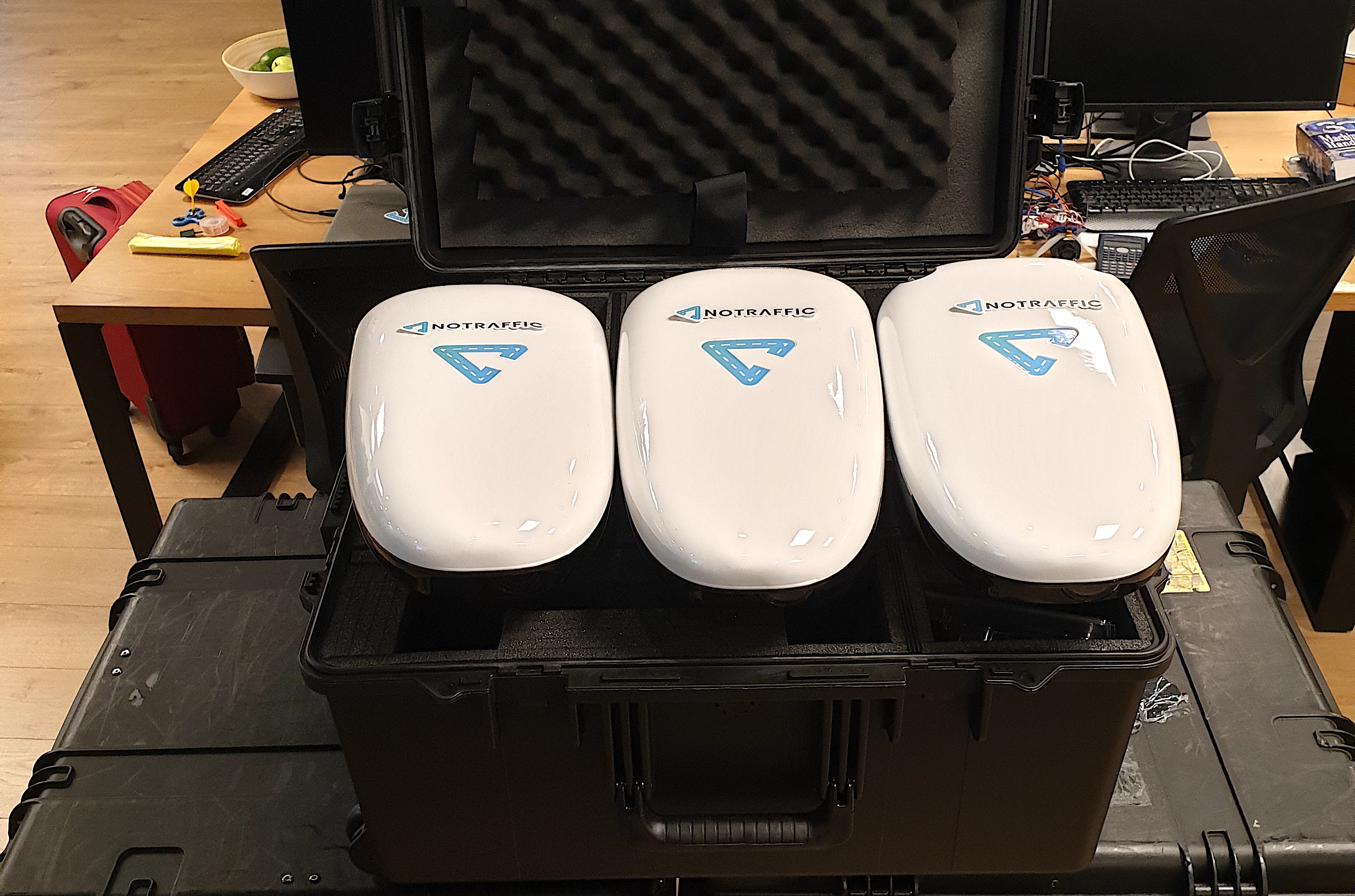 A trio of NoTraffic sensor units, ready for installation.

“Imagine you are looking from above,” suggested NoTraffic co-founder and CEO Tal Kreisler in a video interview with Israel’s Channel 2. “You have the entire picture of who is waiting at the intersection and change the lights accordingly to better manage the system.”

That means that the benefit of making one intersection smart is multiplied when it is connected to all the other intersections. “We can manage the entire traffic signal network,” Kreisler explained. “Through the cloud we synchronize intersections in real time. We have the sensor unit which we deploy at the intersections in a very simple way. We just need to connect it to a power source and it works.”

The system can even help get municipal buses that are running late back on schedule by ensuring that the make the light before it changes at critical times Kreisler said. Or it can be tuned to be particularly watchful for pedestrians at intersections near schools and parks. 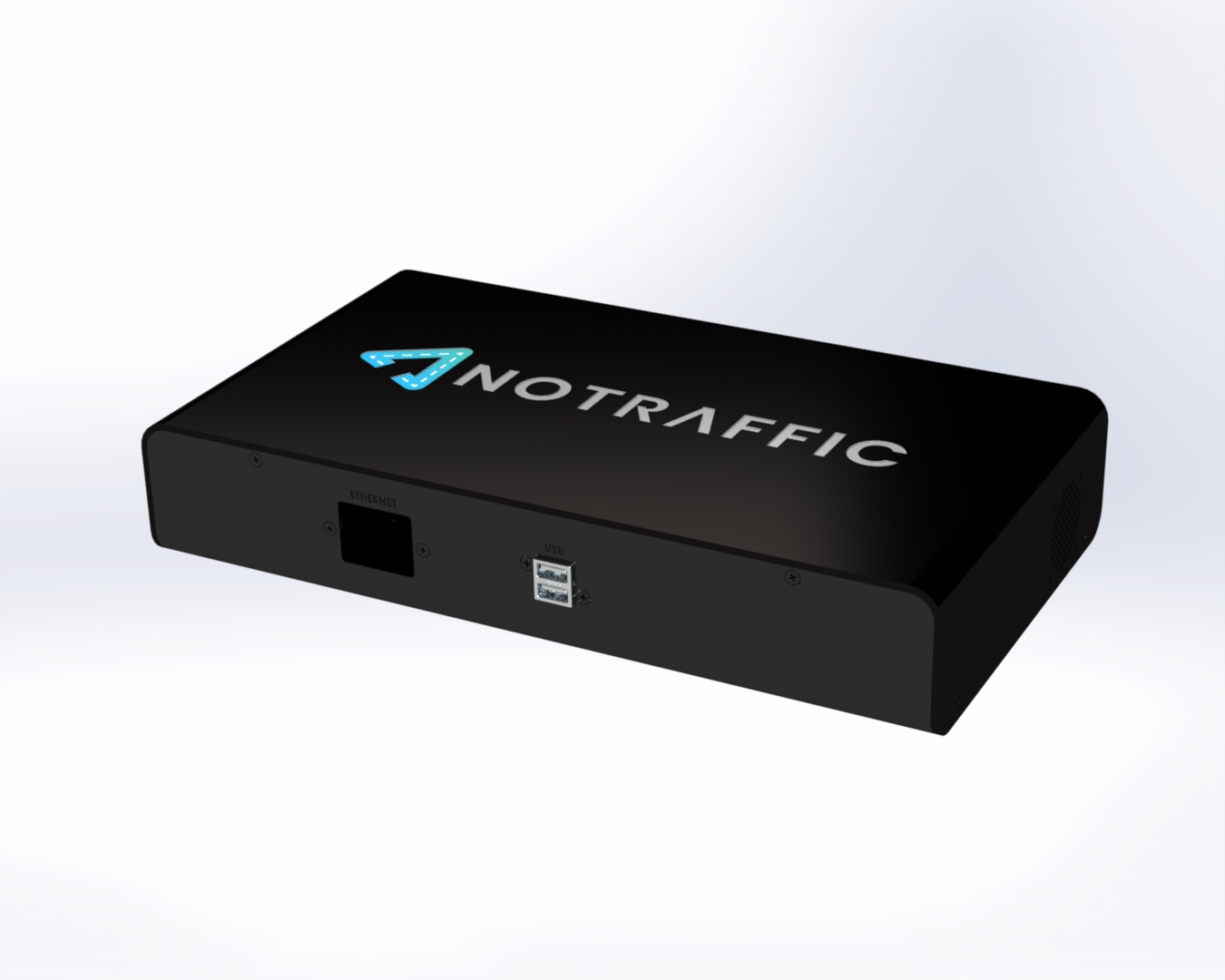 NoTraffic estimates the capital expenditure to equip a traditional intersection is $115,810 and the annual operating cost is $10,050. NoTraffic says its technology offer the opportunity for a reduction in operating cost of nearly 75 percent compared to conventional traffic signals.

Additionally, the system’s greater efficiency increases the potential flow of vehicles without requiring an expensive and disruptive road-widening project, providing additional benefits from the application of AI to an everyday headache.