HomeAutomationIs There Life without the PLC? How to Build a Better Embedded Controller
Recent
Automation
Q&A With IndyCar Gearbox Expert Anna Chatten
May 13, 2022
Intel Unveils Trust Authority to Boost Security
May 13, 2022
Supplier News Looks at Highly Customizable Industrial Monitors
May 12, 2022
Here Technologies Maps are Key to Mercedes Level 3 Automation
May 12, 2022
POLL
'We Built the Domino's Pizza Tracker for Manufacturing'
May 12, 2022
Break Your Bubble Gum Habit by Watching Its Production
May 12, 2022
This Patch Monitors All Your Vitals, Including Blood Pressure
May 12, 2022
First E-Skin to Anticipate, Perceive Touch from All Directions
May 12, 2022

Is There Life without the PLC? How to Build a Better Embedded Controller 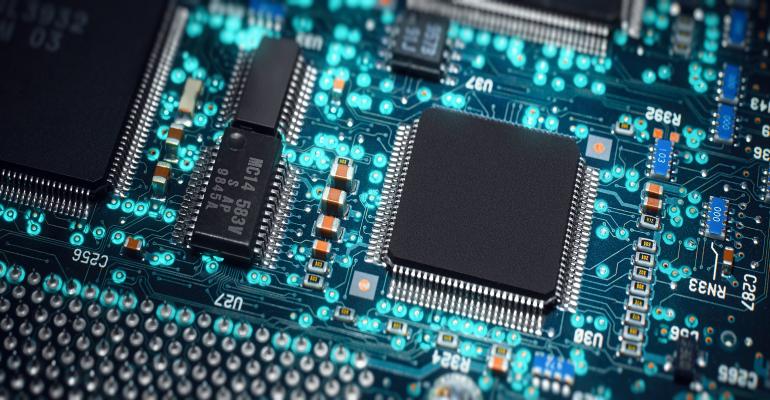 While PLCs (programmable logic controllers) are an industry norm, demands for data, memory, and processing power are intensifying. Soon enough, the PLCs may no longer be the go-to industrial computer.

Here’s a description of the process of migrating machine and mechanism controllers from a PLC-based approach to an alternate approach. This means migrating to an embedded controller, but you could also migrate from PLCs to an industrial computer.

Here, Chuck Lewin, CEO and founder of Performance Motion Devices focuses on migrating from PLCs to an embedded controls approach.

Chuck Lewin: By embedded control architecture. we mean a controller that is located inside the machine that will be controlled. Such an embedded controller is almost always a printed circuit board (PCB), but in theory, it could be something else.

By PLC-based control architecture, we mean PLCs mounted in a box located outside of the machine somewhere, connected to the machine by cables.

This diagram shows the difference between controls-at-distance versus local, although the controls in the box here happen to be an industrial computer rather than PLCs. 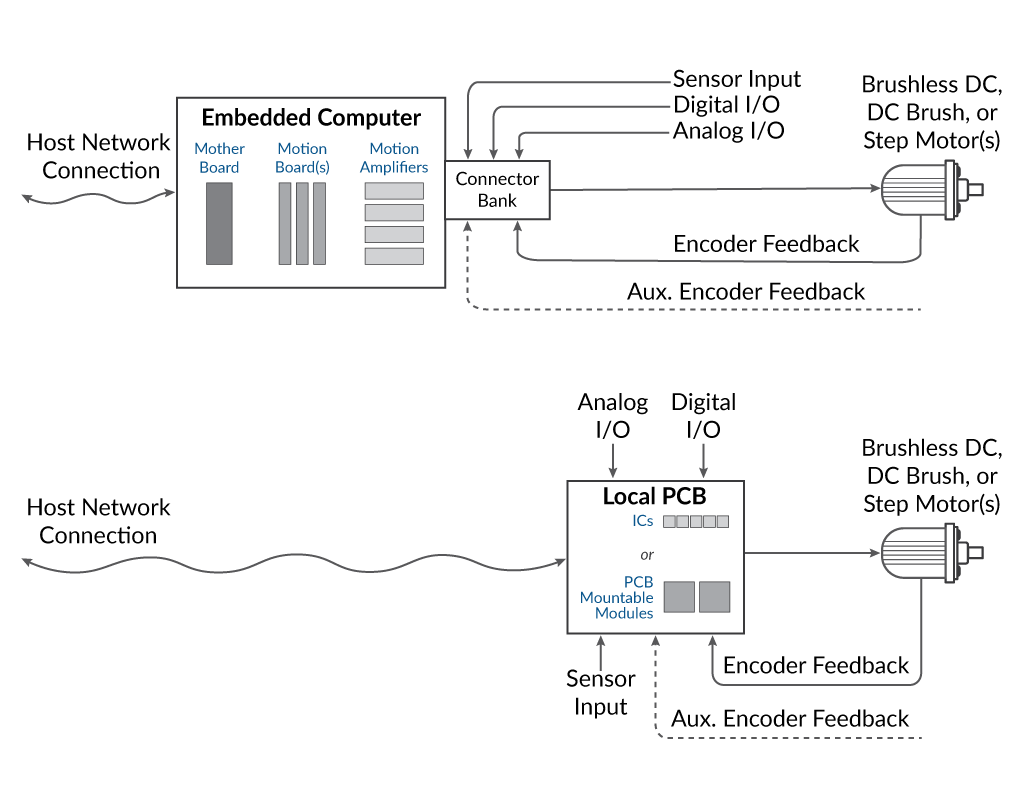 DN: What are the benefits of going without the PLC?

Chuck Lewin: With the above definitions in mind, comparing the remote PLC-based approach to a local embedded approach the benefits are:

-Improved motion performance and sensor data. If the controls are inside the machine this means all the encoder feedback signals, motor drive signals, sensor connections, etc... traverse a shorter distance to get to the controller. Shorter signal distances mean higher signal quality, and less inducted EMI/noise. All of this translates into better motion, smoother velocities, and better sensor data quality.

- Smaller, simpler controller. We did an example application of a three-axis XYZ gantry controller to directly compare what a PLC-based controller for such a device would look like versus a PCB-based controller. Some images are below. The PCB-based approach takes up about ten times less volume than the PLCs (and the DIN rails, and box). But it's also just simpler. The PLC approach requires three separate units, each wired to cables which then exit the box and go to the machine. A lot of moving pieces so to speak. The controller PCB has all connections going from one compact PCB directly to the motors, sensors, encoders, etc...

- Simplified machine assembly. Typically, there is a big win in the machine assembly time with a PCB-based controller compared to PLCs. This stems from the fact that the controller PCB is built specifically for the machine it will control.  So rather than accepting the connector format (usually jackscrew) that is provided by the PLC, the controller PCB can incorporate a mix of jackscrew connections and pre-wired cables tailored to the application.

- Lower per-unit cost. Cost savings when switching to an embedded controller vary a lot, but if you just look at the amount of hardware required to create a PLC-based controller it's clear it's going to cost more on a per-unit basis. You have the PLC itself, the DIN rail mounts, the box, mounts for the box, and the long cables to connect to the machine. For the controller PCB you have... just the controller PCB. The other reason embedded solutions generally cost less on a per unit basis is that they are purpose-built for the machine, and therefore don't design in anything not needed. PLCs are inevitable "kitchen sink" devices with more features than any given application will use. Those unused connections, features, and displays represent an extra cost.

DN: What are the challenges and disadvantages of migrating from PLC-based to embedded control?

- In-field servicing. It's hard to say whether PLC-based or embedded controllers are easier to service. PLCs are easier to access (after all they're in a convenient box away from the machine) but if the machine is behaving strangely it can be a challenge to determine whether the problem is in the PLCs, the PLC's connectors, the cables to the machine, or the machine itself. Embedded controller PCBs on the other hand effectively have no user-serviceable parts, so for good or for worse the tech will swap out the board and see if the problem is solved. Another big factor is access. If the machine is located in a place inaccessible to humans, then of course servicing of the embedded solution will be impossible or require a floor shutdown.

- Greater design effort. Even in an application where switching to embedded control will improve reliability, reduce cost, and reduce the size of the controller, these advantages are only accessible if the company has the resources to design an application-specific controller board. Historically this meant creating an IC-based board design, which requires serious EE design talent for six months or more.  A helpful development in this space though is the increasing availability of PCB-mounted "all-in-one" controller modules. To illustrate, the figures below show two different embedded board approaches to control the same machine. One uses a full-blown IC-based design, and the other "plug and play" motion controller modules. With the modules, the board design time dropped from 6 months to 6 weeks. This is because working with these modules is more akin to creating a wiring diagram, rather than a full-blown IC-based schematic. A simplified view of such a wiring diagram is shown below as well.

Chuck Lewin: There are several considerations. Reduced size and heat output of electronics is one reason. When PLCs were first developed, they were much larger than the motors they drove, and sometimes even bigger than the machines they controlled. They took up large boxes or 19" racks and required extensive cooling. The idea of moving all of that heat-generating "mess" into the machine was a non-starter. Today that's no longer true. The image below shows a representative size reduction from a 2010-era PLC type controller to a state-of-the-art PCB-mounted controller. Not only is the volume reduced by a factor of ten, but the smaller unit can actually drive twice the power output of the larger unit. So today, many of the assumptions that drove machines to separate the controller and the machine are less relevant, or not relevant at all.

Another reason is improved reliability of electronics. Historically the electronics failed much more often than machine mechanics. And so in that world, it makes sense to make the controls as accessible and as easy to swap out as possible. But today electronics are very reliable. So again, one of the important historical drivers of putting the controls in a separate box is greatly diminished in importance.

Yet another reason is the lower cost of electronics relative to other costs. The device pictured below has a 400 MIPS CPU, can drive a kilowatt of motor power, is fully programmable, and has an array of digital and analog I/O.

In short, it's a miniature PLC but one that costs one-tenth of what PLCs cost only 20 years ago. Twenty years ago, the control electronics cost much more than the supporting components such as DIN rails, the box, and the wires. Today the rapidly diminishing cost of electronics has turned the historical system cost calculation of remote versus embedded control on its head. More often than not, when the system cost is calculated now, miniaturized electronics operating locally from a PCB are the less expensive controls approach. And with trends in electronics being what they are this will only become even more so the case in the future.