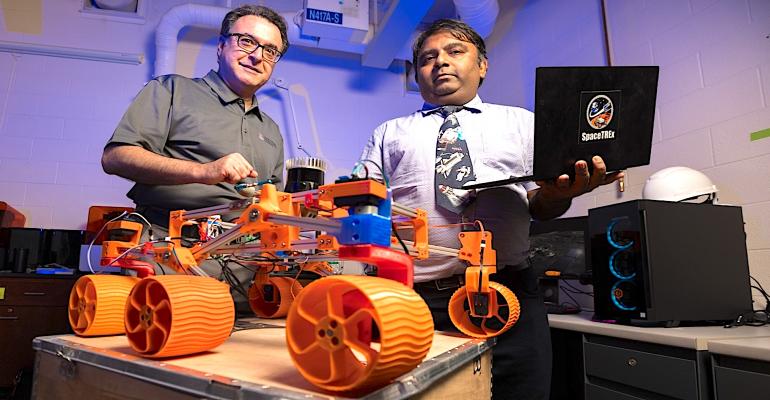 University of Arizona engineering faculty members Jekan Thanga (right) and Moe Momayez have received $500,000 in NASA funding for a new project to advance space-mining methods that use swarms of autonomous robots. They are pictured with a low-cost, rapidly designed, 3D-printed rover prototype used for testing a new generation of miniature sensors for applications in lunar mining.
NASA has tapped University of Arizona researchers to develop technology for mining lunar resources for human occupation.

Humans haven’t been to the moon since 1972, but scientists still have hopes not only of going back but also creating a base on the moon and other celestial bodies where one day people can live.

To help achieve this ambitious goal, researchers are developing swarms of autonomous robots that can mine the resources needed to build those bases. Specifically, NASA has awarded researchers at the University of Arizona (UofA) $500,000 in funding to advance space-mining methods using robot swarms made from 3D-printed parts.

Related: The First 3D-Printed Parts Are Going to the Moon

The idea is that it would be far simpler to acquire resources needed from the moon itself rather than send it all the way from the earth, said researchers and engineering professors Jekan Thanga and Moe Momayez, who co-led the research.

Indeed, as scientists believe that the Earth and the Moon came from a common parent body, the moon should be rich in rare earth metals needed for technologies such as smartphones and medical equipment, titanium for use in titanium alloys, and precious metals such as gold and platinum. It also should have something that is rare on Earth--helium-3, a stable helium isotope that could fuel nuclear power plants, researchers said.

Related: Do You Know the 10 Most Powerful and Massive Space Rockets?

However, “nobody has ever set off a blast on the moon,” noted Momayez—and on earth, this is the most efficient way to drill through rocks, he said.

Still, mining on the moon presents a new challenge, one he and his research partner Thanga plan to try to overcome.

"Here on Earth, we have an unlimited amount of energy to throw at breaking rocks," Momayez said. "On the moon, you have to be a lot more conservative. For example, to break rocks, we use a lot of water, and that's something we won't have on the moon. So, we need new processes, new techniques.”

Anna Nesterova via University of Arizona 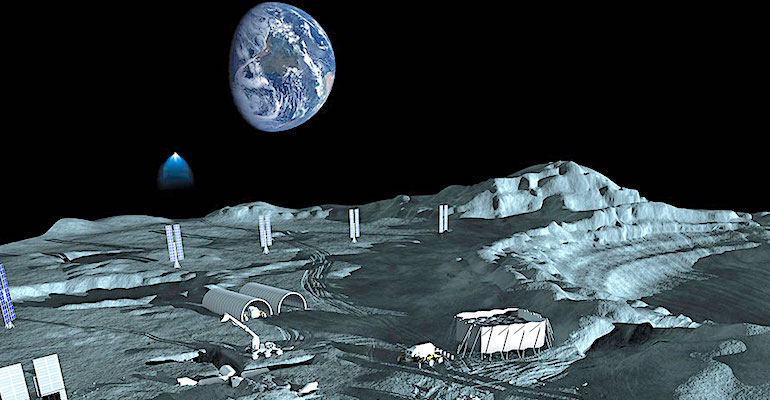 Artist's conception of a lunar mining base.

As part of that challenge, Thanga, an associate professor of aerospace and mechanical engineering--is adapting a neuromorphic learning architecture technique called the Human and Explainable Autonomous Robotic System, or HEART, to create robot swarms that will be capable of mining lunar resources.

The system’s use will be not only to train robots to work together on mining, excavation, and even building tasks, but also to allow the robots to improve their collaboration skills over time. Training will happen on Earth so the robots can get the practice they need to become accomplished at their appointed tasks, Thanga said.

Once they are sent to the moon, however, the hope is that they will be a fully autonomous swarm that can achieve appointed goals for mining and construction without instructions from operators on Earth, he said, comparing the work of his team to farmers.

“We're breeding talent out of these creatures, or a whole family of creatures, to do certain tasks," he said in a press statement. "By going through this process, we help perfect these artificial creatures whose job it is to do the mining tasks."

The robot swarms aren’t meant to entirely replace humans, however, researchers said. Astronauts and other scientists and engineers will still be part of future space exploration teams; however, the robot swarms could perform the mundane tasks so humans can focus on other critical elements of missions, they said.

"The idea is to have the robots build, set things up and do all the dirty, boring, dangerous stuff, so the astronauts can do the more interesting stuff," Thanga said.