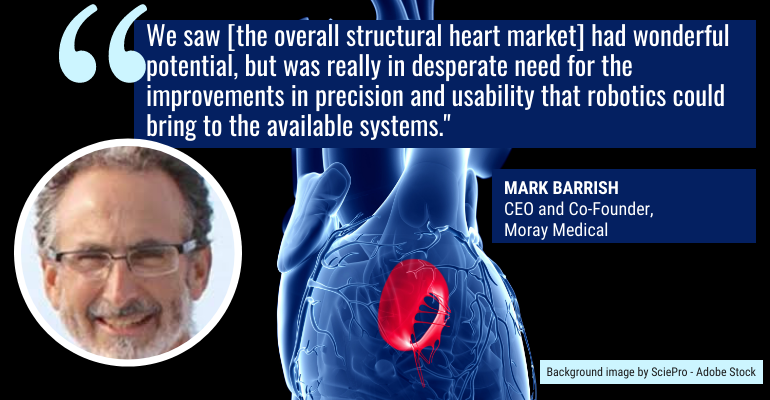 Moray Medical is developing a interventional robotics platform powered by microfluidics and an augmented reality digital user interface. The company's initial focus is on the transcatheter mitral valve repair market.

Moray Medical wants to bring the benefits of surgical robotics to the structural heart space and the company has already attracted $3.3 million in seed money to help with primary developmental milestones.

"Phillip Laby and I founded the company after I had worked with a few robotic medical companies, and Phillip had designed a whole series of really groundbreaking medical robotic systems," Barrish said. "We looked at the overall structural heart space as being a really high growth market, we saw it had wonderful potential, but was really in desperate need for the improvements in precision and really usability that robotics could bring to the available systems."

Moray is developing the Coral system, a interventional robotics platform powered by microfluidics and an augmented reality (AR) digital user interface. The platform has the potential to simplify a wide range of minimally invasive cardiovascular interventions, but Moray is initially focused on the rapidly growing transcatheter mitral valve repair (TMVR) market.

“While transcatheter edge-to-edge repair (TEER), or clip therapy, is rapidly becoming the new clinical standard of care, the complexity and learning curve associated with current devices means that the vast majority of needy patients are being left untreated,” Barrish said. “Our platform is aimed at empowering interventionalists at all skill levels to carry out these procedures in a cost-efficient manner to ensure that millions of additional sick patients get the life-saving treatment they deserve.”

How far will the seed funding take the robotics startup?

Barrish said Moray has three primary milestones that it wants to complete by the end of the year, which is what the seed money will support. First, the company plans to develop its own mitral valve clip. Second, the financing will support further engineering development on the robotics system, specifically to ensure that the robot lines up precisely with the imaging data. Finally, the company plans to conduct a lot of testing.

"This includes static benchtop, beating heart biosimulator, and putting our system in more and more hands of clinicians," he said. "...It's just incredibly important when you're working on something like robotics to realize that yes, robotics has the opportunity to give wonderful precision, but what you really need is improvements in usability ... and feedback from clinicians is absolutely essential to providing that."

The company has already interacted with several interventional cardiologists and structural heart doctors on the research and development work to date.

Moray's near-term goals also includes initial communication with FDA in preparation of filing for a 510(k) clearance and seeking approval for first-in-man studies.