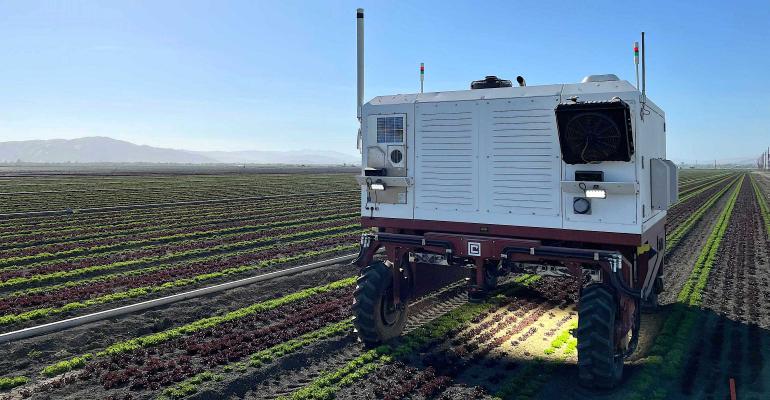 The global herbicide market was $33.65 billion in 2020, according to ResearchandMarkets.com, but Carbon Robotics, an autonomous robotics company, aims to put a dent in that with an autonomous laser-armed weed elimination robot.

Like "The Terminator" for weeds, the Carbon Robotics machine, dubbed “Bud,” rolls through farm fields using artificial intelligence to discern weeds from crops and using a high-power laser to kill the weeds. This lets farmers cultivate crops with less herbicide and reduced labor, improving crop yields and saving money.

Related: How to Build a Better Planting Operation

“AI and deep learning technology are creating efficiencies across a variety of industries and we’re excited to apply it to agriculture,” said Carbon Robotics CEO and Founder, Paul Mikesell. “Farmers, and others in the global food supply chain, are innovating now more than ever to keep the world fed. Our goal at Carbon Robotics is to create tools that address their most challenging problems, including weed management and elimination.”

Carbon Robotics cites these benefits for farmers deploying its robots:

The Bud robot’s brain is an Nvidia AI processor that gathers information from a dozen high-resolution cameras to feed its crop and weed computer vision models. Bud carries lighting so that it can illuminate the scene to let the cameras spot weeds at night.

The business end of the robot contains eight independent weed-killing units, each employing a 150-watt laser that can fire every 50 milliseconds and hit targets with 3 mm accuracy. These have the capacity to zap more than 100,000 weeds per hour. It also has lidar sensors for obstacle detection. The entire 9,500-lb. machine is powered by a 74-horsepower Cummins QSF2.8 diesel engine powering four hydraulic drive motors.

It sounds straightforward, but it took a lot of work to make this practical. “Some of the problems we encountered are having to generate a lot of power in a mobile platform and then distribute that to all of our lasers and cooling systems,” observed Carbon Robotics’ electrical engineer Ben Neubauer. “One of the things that is really enjoyable about working on agriculture robotics like this is working with a lot of different industries and systems,” he added.

Of course, the important thing with a weed terminator is avoiding collateral damage of crops. “One of the first things we worked on at Carbon is the ability to drive down the field without going into bed tops, without crossing them and going over crops,” said Raven Pillmann, deep learning software engineer. “The way we want to do that is by avoiding any GPS, location waypoints, or any sort of plotting. Our approach was to use deep learning and create a furrow detection model. It takes in images with the camera which has RGB and depth sensors, it will run this through a model that gives out the location of the furrow. At the same time running concurrently in another process, we have our controls which will take in the latest prediction, and it will look at where the robot is aligned and the difference between that and the furrow prediction and that will tell it which way to turn the wheel.”

These robots can handle row crops in fields between 200 acres and tens of thousands of acres in size, with each robot clearing 15-20 acres per day to replace several deployments of hand-weeding crews. The robots have undergone testing on specialty crops farms, working on fields with a variety of crops, including broccoli and onions.

“This is one of the most innovative and valuable technologies that I’ve seen as a farmer,” said James Johnson of Carzalia Valley Produce in New Mexico, who uses Carbon Robotics technology on his farm. “I expect the robots to go mainstream because of how effectively they address some of farming’s most critical issues, including the overuse of chemicals, process efficiency, and labor. These robots work with a variety of crops, are autonomous and organic. The sky’s the limit.”

Carzalia Valley Produce liked the idea of switching to organic farming practices, Johnson added, but couldn’t find a way to make it work until using the autonomous weeding robot. “Two years ago I thought that eventually, I could go organic,” he said. “After a year of trying my first regenerative [practices], I was back to thinking ‘There’s no way I can go organic.’ The biggest hurdle I had with transitioning to organic was organic weed control. This solves that problem. Conventional weeding consists of mechanical cultivation, herbicide application, as well as hand weeding. Any kind of chemical input, be it chemical fertilizer, herbicide, insecticide, or anything else that we would apply has an adverse effect either on plant health or soil health.”

So, as long as we can keep Bud and its brethren tending the crops with its lasers and not chasing saviors of mankind through the streets of 1984 Los Angeles, then only the weeds have anything to fear from these terminators!