How Do You Measure a Robot Boom? How About 20% Growth Globally 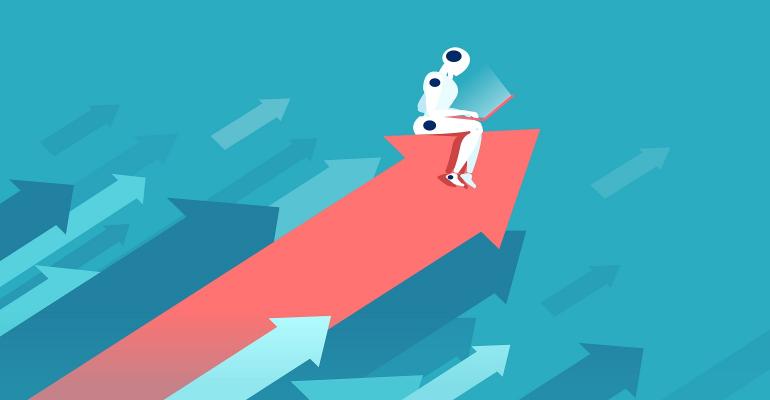 Market reports from A3 and the International Federation of Robotics point to a 20% year-over-year expansion in robot sales.

According to a quarterly market report on robot sales from Association for Advancing Automation (A3), robot sales are expanding quickly in North America. Coming off an exceptionally strong 2020, robot orders in the first quarter of 2021 were up 20% over the same period in 2020. North American companies purchased 9,098 units valued at $466 million in Q1, with non-automotive companies purchasing 28% more robots over Q1 2020 and automotive OEMs and component suppliers combined seeing a 12% increase year-over-year.

Substantial increases in purchases are coming from companies in metals (up 86%), life sciences/pharmaceutical/biomed (up 72%), food & consumer goods (up 32%), and other non-automotive industries (12%).

Related: Industry Voices: Universal Robots Discusses how to Solve Your Labor and Productivity Challenges With Cobots

In prior years, the automotive sector dominated robot purchases. That has changed significantly. “The automotive counted 70% plus in a lot of years. We knew we needed to get into other industries. Now, it’s really exciting because now the non-automotive is bigger than the automotive used to be,” Jeff Burnstein, president of A3, told Design News.

The growth in non-automotive is reaching new heights against the traditional automotive market. “We’re penetrating beyond auto into life sciences, food, and consumer goods. Stronger than we’ve ever seen,” said Burnstein. “Auto isn’t falling off a cliff. Non-automotive is growing. That’s what’s exciting in this data.”

The pandemic affected last year’s market, as sales to online companies spiked. “The fastest growth last year was in ecommerce,” said Burnstein. “We’re seeing growth in collaborative and mobile robots. Those sales are going to Locus, Fetch, Mir, and many more. They’re starting to take off.”

Robot sales are also strong across the globe. China leads the post-pandemic recovery, according to the International Federation of Robotics World Robotics outlook. The preliminary data for China released by the IFR show a sales increase of industrial robots by 19% in 2020. 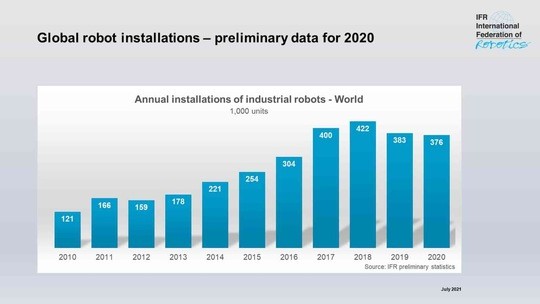 Market growth in China also has a strong positive impact on foreign suppliers – up 24%. A healthy 123,000 industrial robots were shipped from abroad. Japanese suppliers have a dominant market share. Domestic suppliers delivered 44,000 units to their home market which is an increase of 8% compared to 2019.

Robots Outside the Box

The pandemic led to a rush of online purchases. That led to online retailers needing to improve their fulfillment operations – which led to robot purchases. “Ecommerce companies have become a big deal in the growth of robotics. You used to have peak holiday times where you had to hire people,” said Burnstein. “Now every day is holiday time. Robots are playing a key role in managing that growth. The convenience of ecommerce is such that we’re not sure we’re going back to normal times.”

Companies with non-standard products are also investigating whether robots might help. The meat industry was stymied during COVID by social distancing. Some meat producers sought automation to solve the problem. “GM visited Tyson’s food to figure out how to deal with chickens. The issue is non-standard products,” said Burnstein. “There have been advances in intelligence, but maybe we’re not quite there yet.”

The reasons for shipping manufacturing to Asia have changed. The savings are not as strong as they used to be, and supply chains stretched across the world are becoming strained. Shipping time is also an issue. “The pandemic interrupted supply chains. Companies are seeing issues with the supply chain, They’re thinking maybe we should move it back here,” said Burnstein. “Automation levels the playing field geographically. Labor costs in China, Vietnam, and Malaysia are going up. So companies are figuring that automation can help them bring production closer to home. Plus, they don’t want to lose time in shipping or lose their IP.”

While automation is getting easier to deploy, companies still need expert help in setting up their systems. “Not everything in automation lends itself to pushing the button and having the robot do it,” said Burnstein. “You do need integration help if you’re going to be successful.”