The Future of IoT Includes Edge Computing, AI, and Blockchain 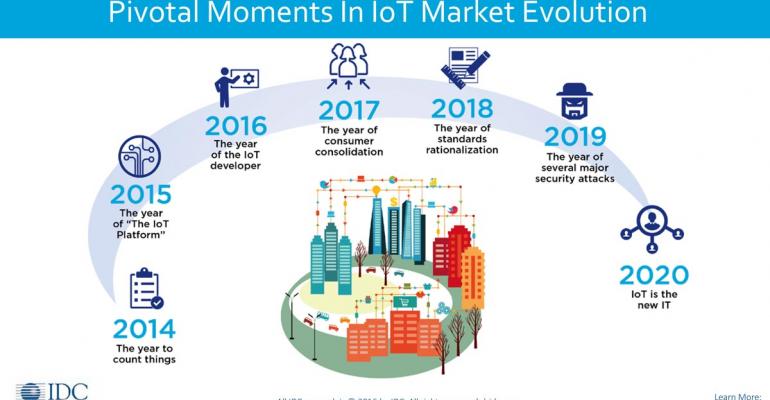 IDC forecasts a steep climb in IoT spending through 2022. An IDC researcher explains the stages of IoT development—past, present, and future.

IoT spending is in full bloom, and it’s going to bloom bigger. Research from IDC forecasts that IoT investment for the period 2017 through 2022 will hit $1.2 trillion. That’s an annual growth rate (CAGR) exceeding 13%. IDC’s Worldwide Semiannual Internet of Things Spending Guide forecasts a burgeoning IoT technology market. A good chunk of that total is expected to involve industrial applications. Discrete manufacturing and transportation will each exceed $150 billion in spending in 2022, making these the two largest industries for IoT spending.

This past fall, at the IoT World Congress in Barcelona, the guide’s author—Carrie MacGillivray, IDC’s VP of IoT and Mobility—explained the forces behind IoT proliferation. She noted where IoT has come from and where it’s going and pointed to distinct stages in the development and deployment of IoT systems—from early limited systems, to today’s predictive data analytics, and on to a future with edge computing, artificial intelligence (AI), blockchain security, and video systems.

The Three Chapters of IoT

MacGillivray explained that IoT development has followed three clear chapters: the “M2M age,” which is behind us, the current era, and the coming chapter. In the first chapter, there were disparate endpoints, the solutions were specific and pointed, and there was opportunistic use of the cloud. There also was minimal intelligence and analytics were descriptive in nature. These days, there is a growing association between endpoints in IoT connectivity. Computing at the edge is rising in relevance while the cloud has become a critical enabler. In addition, analytics has become predictive to detect future outcomes.

MacGillivray sees changes in these elements. In the next chapter, she sees IoT endpoints becoming interdependent. In addition, computing at the edge will become mainstream. The cloud will be the place for heavy computing and analytics. And predictive analytics will morph into prescription analytics that offer the right solution after determining the future outcomes.

“In the early days of IoT, we had disparate endpoints that were not doing a lot of data analysis. Instead, it was descriptive: on/off or hot/cold,” MacGillivray told Design News. “Now, the endpoints are talking to each other. We’re seeing computing at the edge, which is just emerging as part of IoT, and the cloud is still playing a big role. In the next chapter, we’re going to see the interdependence between devices and the independence of the devices at the edge, with smaller amounts of data going back to the cloud.”

The Edge, AI, and Blockchain

As for the future, MacGillivray expects there will be convergence between IoT and other technologies, including blockchain and artificial intelligence (AI). She also sees a greater reliance on edge computing with the cloud used for just the most sophisticated analytics. “Computing at the edge enables the distribution of computing across the network. It’s dependent on use cases. Sometimes, the data needs to be processed just on the device and does not need to be transferred back to the cloud,” said MacGillivray. “Sometimes, the connectivity only needs to be intermittent, which is helpful when connectivity isn’t always available. What we’re seeing is a hybrid between the edge and cloud computing.”

She also sees the convergence of technologies. “AI will become a critical source for the IoT. At first, AI was just a matter of tracking processes and goods, but now AI is helping humans make decisions,” said MacGillivray. As for security, MacGillivray sees blockchain as promising. “Blockchain can bring trust into IoT. The IoT network needs to be secure, and it needs to be one instance of the truth. It requires a lot of data to make a transaction to take place. The devices in the field now have the compute power that blockchain requires.” She also sees video as an emerging IoT function. “Video is becoming a killer app in IoT, since it can capture the context of the process.”

As for remaining IoT hurdles, MacGillivray cites IDC research that reveals insights into the barriers of IoT deployment for industrial companies. The number-one hurdle is the need for broader infrastructure upgrades prior to deployment, cited by 51% of respondents. Issues with technology scalability are next, cited by 47%. Third is the exposure to security vulnerabilities cited by 45%, while the cost concerns of expansion come in fourth, cited by 41%.