Are Soft Robots That Can Burrow Underground a Benefit or an Alien Horror? 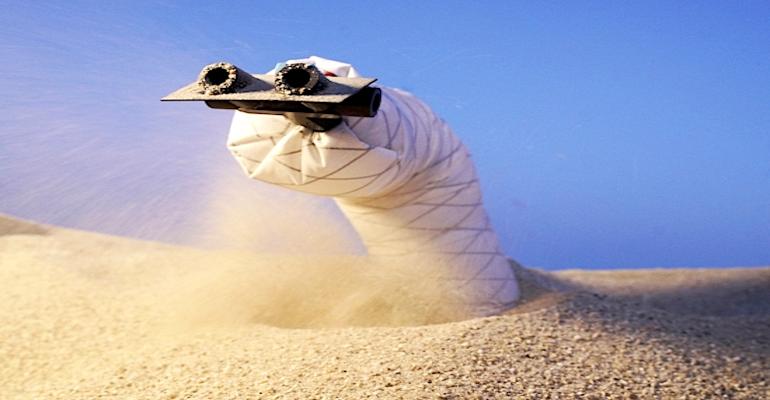 NASA could potentially use the vine-like machine robots developed by scientists to navigate below the surface of other planets and moons.

While scientists have developed robots that can fly, swim, and navigate rugged terrain on land, the ability for these complex machines to go under the ground and explore beneath the earth’s landscape has so far been limited.

Until now, thanks to researchers at UC Santa Barbara and the Georgia Institute of Technology, who have developed a fast, controllable soft robot that can navigate subterranean spaces, they said.

Related: Robots That Move Like Cats? What Will They Think of Next?

Plants and animals inspired researchers to develop the robot, which solves some previous challenges scientists faced with creating a machine that can not only make its way into the earth but also have the power to then resurface.

“The biggest challenges with moving through the ground are simply the forces involved,” said Nicholas Naclerio, a graduate student researcher in the lab of UC Santa Barbara mechanical engineering professor Ethan Hawkes, who led the research.

Developing robots that can fly or swim is not as challenging, as neither air nor water offers significant resistance to objects moving through them. However, “if you’re trying to move through the ground, you have to push the soil, sand, or other medium out of the way,” he explained in a press statement.

Researchers studied both plants and burrowing animals for inspiration for their work. In terms of plants, the way they navigate by growing from their tips while keeping one body rooted and stationary was the inspiration for the vine-like robot they developed.

Underground, tip extension keeps resisting forces low and localized only to the growing end, researchers said.  In the robot, they used this as a design model so they didn’t create friction over the entire surface of the robot that would increase as more of it entered the sand, which would stop it from moving, they said.

In terms of animals, researchers looked to the southern sand octopus, which expels a jet of water into the ground and then uses the loose sand to move. They then applied this idea of granular fluidization, or the suspension of the particles in a fluid-like state so animals can overcome the high level of resistance presented by sand or loose soil, to the robot’s design.

Following this idea, researchers added a tip-based flow device that shoots air into the region just ahead of the growing end of the “vine,” which allows the robot to move into that area, they said.

Researchers found that the biggest challenge to controlling the robot’s movement was when it moved horizontally, Naclerio said. In these cases, it would always surface instead.

The team discovered that this is because while gases or liquids evenly flow over and under a symmetric traveling object, the force distribution is not as balanced in fluidized sand, he said. This, then, creates a significant lift force for the horizontally traveling robot, Naclerio said.

“It’s much easier to push the sand up and out of the way than it is to compact it down,” he said in a press statement.

To solve this problem, researchers turned to physics, taking drag and lift measurements that result from different angles of airflow from the tip of a solid rod shoved horizontally into the sand, they said. They found that frictional force response in granular materials is much different from that in Newton’s laws for fluids because high friction can compact and stress large areas of terrain in the direction of motion.

To mitigate this, researchers used a low-density fluid that lifts and pushes grains away from an intruder—in this case, the robot—to reduce the net frictional stress it has to overcome, they said.

They also took inspiration from another creature, the sandfish lizard, which has a wedge-shaped head that favors downward movement. This design aspect allowed the researchers to modulate the resisting forces and keep the robot moving horizontally without rising out of the sand, they said.

There are many potential applications for the soft robot, including soil sampling, underground installation of utilities, and erosion control, researchers said.

The machine’s design—particularly the tip extension that enables changes in direction while also allowing the robot’s body to stay firmly anchored—is also conducive to exploration in low-gravity environments. For this reason, NASA is interested in using the soft robot for potential investigation of other planets and moons, researchers said.

To this end, the team is working with the space agency specifically to develop burrowing for the Earth’s moon or even Enceladus, a moon of Jupiter, they said.

Overall, the team’s endeavor to gain a better mechanical understanding of how plants and animals navigate subterranean environments also paves the way for other innovations in science and technology, observed Daniel Goldman, a professor at Georgia Tech who worked on the project.

“Discovery of principles by which diverse organisms successfully swim and dig within granular media can lead to the development of new kinds of mechanisms and robots that can take advantage of such principles,” he said in a press statement.  “And reciprocally, development of a robot with such capabilities can inspire new animal studies as well as point to new phenomena in the physics of granular substrates.”