The US and Japan Will Fight in a Giant Robot Battle 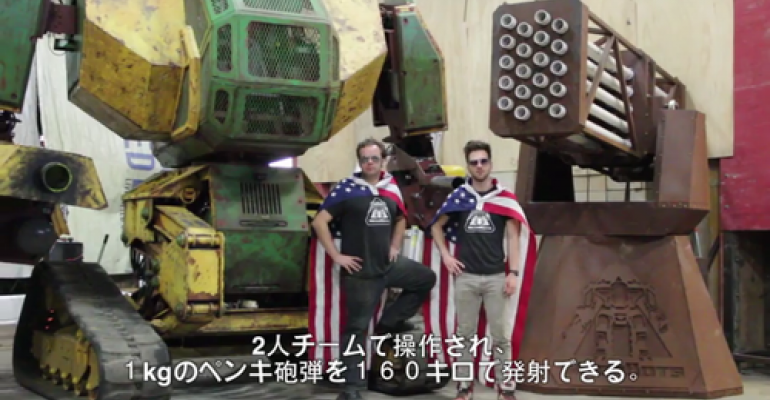 2015 gave fight fans Mayweather vs. Pacquiao. 2016 will give robot lovers MegaBot vs. Kuratas. 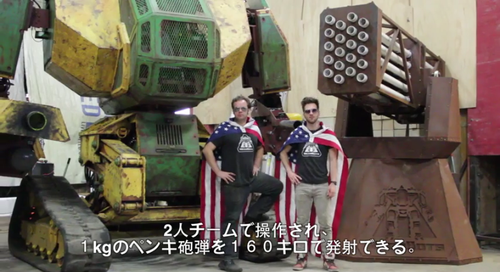 MegaBots, the startup with big dreams of making robot combat the next wave of live sports, has laid down the gauntlet, challenging its Japanese counterpart, Suidobashi Heavy Industry, to a fight to the finish.

In late June, shortly after completing the Mark II model of its MegaBot, company co-founders Gui Calvalcanti and Andrew Stroup took to YouTube to lay down a challenge to Japan's Suidobashi Heavy Industry and its robot, the Kuratas. "Suidobashi, you have a giant robot, and we have a giant robot. You know what needs to happen," the challenge from MegaBot said.

Perhaps not wanting to lay down a response on the 4th of July, Suidobashi Heavy Industry's CEO Kogoro Kurata, uploaded a video of his own to YouTube on July 5 and accepted MegaBots' challenge. MegaBots will name the time and place -- but both parties have agreed to allow a year for both robots to be modified and made combat ready. "We can't let another country win this. Giant robots are Japanese culture," Kurata said.

The Kuratas robot debuted in 2012 and was billed by the company as "the world's first giant boarding robot." It stands at about 13 feet high and weighs about 4 tons. A single person can pilot the wheel-based, diesel engine Kuratas either in the cockpit using an interface based off of the Microsoft Kinect video game controller, or remotely using a touch screen smartphone. It has a top speed of about 6 mph. It's primary weapons are a BB Gattling gun capable of firing up to 6,000 rounds per minute, and a launcher that can shoot fireworks or water bottles.

The robot was privately funded by Kurata and any interested parties are welcome to purchase their own Kuratas robot on Amazon Japan for about $1.3 million US.

MegaBot began as a Kickstarter project in 2014. The crowdfunding campaign failed, but the company was able to complete its Mk II prototype thanks to a partnership with Autodesk. The MegaBot Mk II is gas powered and comes in at about 5 tons and 15 feet high. Since it was designed for more friendly competition its primary weapons are paintball guns that can fire projectiles at speeds exceeding 100 mph according to the company. MegaBot moves slower at 3 mph, but it features a two-pilot system -- one pilot to steer, another to control weapons.

There's no word yet on the actual dates and details of the challenge, but the challenge already has commentators on Reddit speculating and handicapping the matchup. For his own part Kurata has already started in with the trash talk, saying that MegaBots' robot could be cooler and that its size and big guns are "super American." For their part Calvalcanti and Stroup seem to agree, "... because we're American we added really big guns!"

Suidobashi Heavy Industry has also requested the competition not only involve guns but also melee combat between the two machines. "If we're going to win this I want to punch them to scrap and knock them down to do it," Kurata said.

Who's your pick to win? How would you build the ultimate giant fighting robot? Share your thoughts in the comments.

And for anyone wondering why anyone would get an idea like this to begin with ... just blame the '80s.