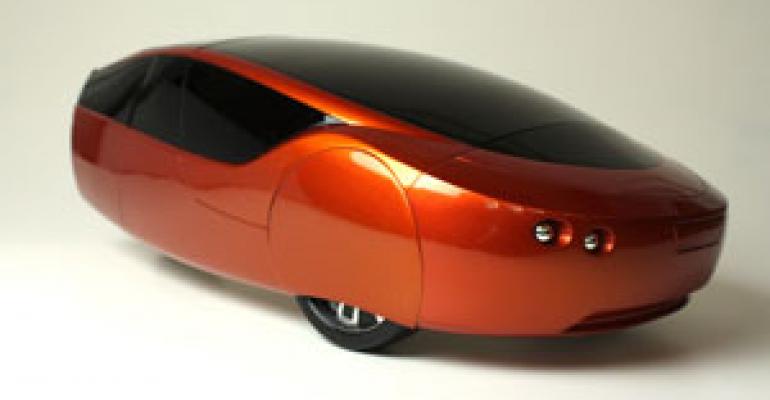 KOR EcoLogic's hybrid vehicle stands out from the pack for reasons other than its futuristic tear-drop shape or promise to get up to 200 mpg on a hybrid electric/gasoline engine. The Urbee blazes new ground in that it's the first automobile prototype with a body produced solely using a 3-D printer.

Unlike other alternative energy vehicles under development, the Urbee is being architected from the ground up to be as efficient as possible and to run on renewable energy, including electricity, solar, hydro or wind power. Key to the design goals of the two-passenger Urbee - which is being positioned as urban vehicle for short trips, not long hauls - is the ability to be charged from an accessible conventional energy source, whether it's a standard home outlet, a home solar array or a windmill. It will also run on as little as 1 percent of energy per mile travelled.

"Our vision is that you should be able to capture enough energy from the footprint of the garage you parked in to run the vehicle," says Blaine McFarlane, mechanical engineer at KOR EcoLogic. With that in mind, the KOR EcoLogic team envisioned the Urbee relying on a power source the size of a city lot, for example, whether that source was solar panels on the roof of a house or the equivalent of a small ethanol field, he explains. "It doesn't make sense that you need a solar collection system the size of a Wal-Mart building to run your vehicle," McFarlane says. "To us, it's a matter of scale."

A group of engineers, led by Jim Kor, started the project more than 13 years ago, more as a part-time exercise and relying primarily on spreadsheets and computer simulations to explore their design goals. As market demand for alternative energy vehicles began to heat up, the team regrouped and decided it was time to put serious development muscle into the Urbee project.

Rather than employing expensive materials or complex manufacturing processes, the Urbee design focused on seven key principles in order to maximize the distance that can be traveled per unit of energy consumed. They are: weight, coefficient of aerodynamic drag (Cd), rolling resistance (Crr), frontal area, maximum speed and maximum acceleration. "We didn't start with what people would like to have - we started with what the physics would allow," McFarlane says. Based on those core design points, the Urbee team made trade-offs. For example, the car's design won't allow for zero to 60 mph in 5 sec, but McFarlane contends that that's not how most people drive, particularly within city limits.

In addition to its teardrop design, the Urbee calls for high-pressure tires to reduce rolling resistance and also incorporates a small 7 hp engine for backup. Unlike many of the emerging electric/hybrid vehicles, the Urbee eschews lithium-ion batteries for lead acid batteries - a choice McFarlane says fits with the Urbee's design principles around simplicity and ease of service.

Technology Building Blocks
Autodesk's Inventor CAD software and other digital prototyping tools are the starting point for the design process. Urbee received the Autodesk digital prototyping suite for a nominal fee as part of its participation in the company's Clean-Tech Partner program. Inventor is used to model and create the drive train and frame components in addition to sheet metal design of the simpler shapes. For complex shapes like body parts, the Urbee team employed Autodesk Alias and Autodesk Showcase was used for the photorealistic rendering aspects of the vehicle design.

Initially, two industrial designers carved a 60-percent scale version of the Urbee out of clay and the model was cut in half and 3-D scanned to get the surfaces into the computer. That model was scaled to full size, and Autodesk Alias was tapped to split the vehicle model into body panels and glass and to incorporate edge profiles to determine the joints between panels, McFarlane says. An aerodynamic study was then conducted on the full-scale 3-D model, and once the team was confident with the shape and aerodynamic drag, it was ready to build a physical prototype.

It's at this stage that technology really steals the show. Rather than using conventional forming technologies to create a prototype, KOR EcoLogic, in partnership with Stratasys, decided to produce the body panels for the prototype using Stratasys' fused deposition modeling (FDM) 3-D printing process, which creates plastic parts by applying thermoplastics in layers from the bottom up. With this method, the Urbee team eliminates having to create any tooling or machining, and approach improves flexibility when a design change is required, McFarlane says.

Initially, the KOR EcoLogic team 3-D printed a one-sixth scale model of the Urbee to confirm design points, an exercise that took about two-and-a-half to three days using two Stratasys machines. The group is in the midst of 3-D printing a full-scale model, and the team is evaluating the use of 3-D printing for other parts of the car, including air ducts, headlights and interior components. Currently, there is no official time frame for the Urbee to go into production.

"With traditional prototyping processes, we'd still be making patterns," McFarlane says. "Sending off files and getting them printed rather than doing handwork frees up all kinds of time for designers to work on other things. It's basically cut close to a year off of our prototype schedule."

For more information on KOR EcoLogic's Urbee and to watch a video, go to http://www.urbee.net/home/.
0 comments
Hide comments
Related
You Might Like