Tech Disruptors from the Anaheim Show: Robots Operating on the Body 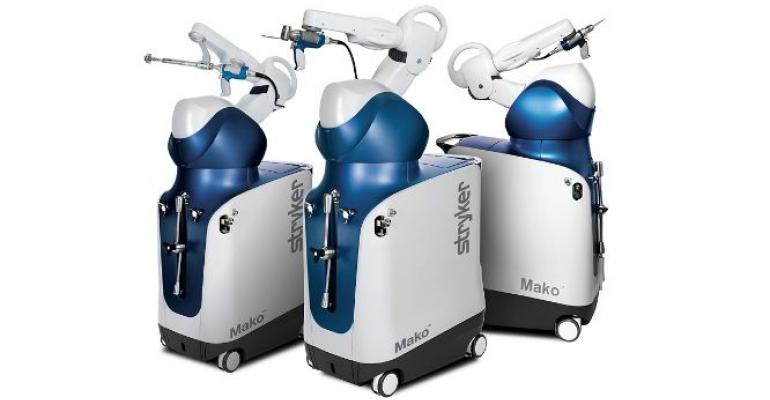 The robotics system developed by Stryker is designed to make knee and hip surgery predictable while offering quick recovery – and the system collects data.

Brian Schmitz from Stryker offered a look into the dazzling world of surgical robotics, even suggesting that medical technology will eventually go beyond physical repair and begin making improvements on the human body. Cyborgs here we come.

Stryker and the Mako System

Schmitz explained that Stryker’s Mako System of robotic surgery was designed to enable users to have a more predictable operational experience when performing joint replacement surgery. The current system offers partial knee, total hip, and total knee applications. “Our robots are part of a collaborative operation,” said Schmitz. “The Mako System works with hands and end effectors on a pre-operative plan to make sure the knee is in the right place to give it long life. The result is less pain and a quick recovery. This is the innovation Stryker has brought to medicine.”

The system also performs like technology in Industry 4.0 when it comes to data collection. “The system allows us to extract data in the operating theatre so we can see how the surgeon plans the procedures and conducts it,” said Schmitz. “It’s like a black box data collector.”

Unlike the robots created for the factory floor, medical machines go through a rigorous certification process before they can touch human patients. “We were lucky to create a successful pathway through the FDA,” said Schmitz. “We do studies to show that the device is better than what is currently used in market.”

The path for surgical robots has become more difficult due to failed systems that had to be withdrawn from the market. “The FDA is getting more stringent. There have been a lot of devices that had to be recalled,” said Schmitz. “We had to work with the FDA to create a plan to get it cleared. The whole process took two years.”

The Future Belongs to the Robots

Schmitz noted that some of what we’ve seen in science is becoming reality. These developments prompt justifiable handwringing. “There are ethical challenges when technology becomes part of the human body,” said Schmitz. “Does it go beyond curative when you improve the human body? Are there military uses? We have an implant for a child’s body that will grow as the child grows. It’s more invasive, but it provides a great benefit.”

Advances in 3D printing have also taken a role in the world of surgical robotics. “Additive manufacturing has also had an impact on our implants,” said Schmitz. “3D printing has allowed us to create implants. Additive has been a huge boon for implants.”

Additional articles from this panel look at the advanced work on robotics by Auris Health and NASA’s Jet Propulsion Lab.