HomeAutomationSolidWorks Takes off in the Cloud
Recent
Automation
Schwab Commemorates 1979 Tech Upgrade with a Custom Firebird
May 25, 2022
AAA Testing Highlights Automated Driving Failures
May 25, 2022
Top 10 Semiconductor Suppliers of 2021
May 25, 2022
Strategies to Reduce Noise and Vibrations in Vehicles
May 25, 2022
POLL
NI CEO Says Data and Testing Key to Future Technology Success
May 25, 2022
NASA Space Missions: To Infinity and Beyond
May 25, 2022
Rivian Patents Automated EV Charging Connector
May 24, 2022
3D Molding Analysis Software Moves to Smart Design
May 24, 2022

SolidWorks Takes off in the Cloud 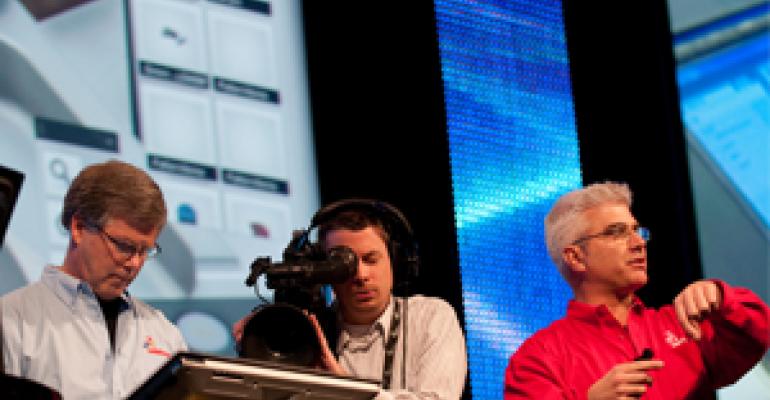 SolidWorks gave the 5,000 attendees of its SolidWorks World 2010 user event a peek into where the future of the 3-D CAD program lies, showcasing an experimental version of the tool primed for cloud computing.

At the opening day general session, SolidWorks CEO Jeff Ray showed off a demo of a new version of SolidWorks running as a native application on the Mac OS - a platform that many of its customer base have long wanted the company to support. The company also trotted out a virtualized version of the new SolidWorks release running on a Netbook computer, as well as a multi-touch platform under Windows7. The intent of the demo was twofold, according to Austin O'Malley, SolidWorks' executive vice president of research and development. The first was to demonstrate SolidWorks' commitment to device choice and the second was to embrace the cloud computing model as way to give users automatic transparent data access.

"A lot of people are using things like Netbooks and mobile devices and these users want flexibility," O'Malley explains. "The way we look at it, users should have the choice to work with any device they want - whatever provides a better user experience."

By introducing SolidWorks to the cloud, the company is embarking on a paradigm shift around collaboration, according to O'Malley. Engineers will be able to work on a design locally at their desktop, save it to the cloud, go home and access that very same design from their device of choice. That same flexibility extends to collaboration with extended design teams. Today, people collaborate mostly asynchronously via email or sending out drawings in a tube, or they employ tools for real-time collaboration. Yet once those sessions end, the project is no longer immediately accessible. "What we're trying to provide is more akin to how people work in the real world," O'Malley explains. "What the cloud does is provide a paradigm where the model is always alive and you can access it at any time. It's like a massive multiplayer game - it doesn't shut down like collaboration tools do today." There will also be a range of social networking functions delivered in the cloud version of SolidWorks to promote design collaboration and foster community.

Cloud computing, or software-as-a-service as it's referred to in some circles, is a gaining traction in enterprise computing as a flexible and low-cost alternative for deploying software. Instead of running applications on each individual computer, the cloud model offloads the main processing to a hosted server, which can be located anywhere, and the application is delivered as a service to the desktop via the Internet and a browser. Companies are attracted to the cloud model because of its scalability and ease-of-administration benefits, not to mention the cost efficiencies of shared computing resources and only paying for what you need.

CAD and other kinds of engineering software have not been linked to the emerging cloud computing phenomenon for a number of reasons. Security remains a concern as companies - and individual engineers - are hesitant about putting their intellectual property in the uncharted territory of the cloud, which is outside of their control. Perhaps the biggest concern is performance-related. Due to the highly graphical and mathematical nature of CAD, simulation and other kinds of engineering software, many have been skeptical about doing compute- and time-intensive operations such as rebuilds and meshes over the Web while still achieving optimal performance.

Rob Rodriguez, an active member of the SolidWorks community and owner of Axis CAD Solutions LLC, a provider of visualization services, says the performance concerns lie more with the cloud infrastructure in terms of bandwidth rather than with any SolidWorks technology. Nevertheless, he says he's intrigued by the promise of a cloud model and the benefits it can provide CAD users. "The primary benefits as I see them are access to real-time data anywhere in the world, access to real-time data on almost any device and the ability for non-CAD owners or users to view, review and comment on the data," he explains. As far as the cloud model goes, "the implied promise of better performance, more stability, lower overhead, operating system independence and better data sharing and reuse are all big deals for engineers," he adds.

O'Malley says the cloud computing model, along with new multicore processor capabilities on the desktop, address the performance issues not as they relate to speeding up a single operation, but rather, being able to perform certain processing tasks simultaneously. In this vein, SolidWorks is talking about things like predictive engineering, or the idea of the software doing things ahead of time in anticipation of a user's next move. So, for example, the software could alert the engineer if their design didn't meet specified tolerance levels as they were in the process of designing. The new capabilities could also come into play with analysis, making that function available to the engineer during the product design workflow as opposed to being a post-processing step as it exists today.

As part of its push into the cloud, SolidWorks also showed off some work-in-progress with its parent company Dassault Systemes. The companies previewed a next-generation ENOVIA, akin to Salesforce.com, which would serve as a cloud computing platform upon which application services could be built and delivered. SolidWorks previewed one such service: Product Data Sharing, which would provide social networking capabilities along with data management, data versioning and visualization capabilities for collaborating with design partners.

The new SolidWorks cloud computing functionality, which has been in development for nearly three years, has not yet been slated for any specific product offerings. However, O'Malley says SolidWorks is aiming to release some type of cloud-based offering by the end of the year.