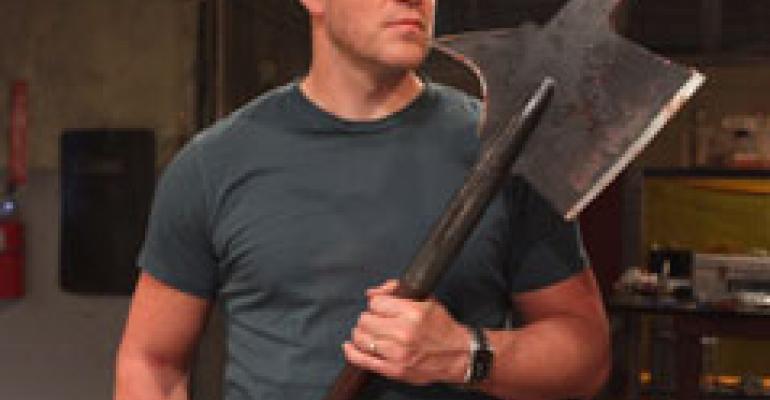 Soldiers have long captured the imagination of both history buffs and combat enthusiasts, who've been known to spend hours building a case for how one century's storied warrior could trump another in the ultimate showdown.

Spike TV's "The Deadliest Warrior" cable television show has earned a huge following just by putting those time-tested battle scenarios to the test. Whether it's a Ming warrior versus a musketeer, an Apache pitted against a Gladiator, or a modern-day Navy Seal matched up against an Israeli Commando, "The Deadliest Warrior" aims to cut through the hype and conjecture, wielding proven science and state-of-the-art computer and simulation technology - albeit, with a smattering of entertaining reenactments - to help prove a winner.

Along with the latest in CGI technology, the show enlists warrior-specific experts and world-class fighters who provide insight into what makes these infamous combatants tick while analyzing every facet of their battle skills. The culmination is a head-to-head battle that purports to reveal the deadliest warrior, which last season showcased showdowns between such icons as Attila the Hun, Alexander the Great, the Jesse James Gang, the Al Capone gang, the Roman Centurion, Somali Pirates and a couple of super spy organizations - the KGB and CIA.

The show has been a surprise hit for the MTV-owned network, which targets 18- to 45-year old males. Just renewed for a third season, "The Deadliest Warrior" was the first franchise hit for the Spike network, commanding an audience of more than 1.6 million viewers per episode and generating more than 16.6 million video views of show-related videos on the Web for the course of the season. While the blood, gore and epic battles have appeal for the core Spike audience, the show has struck a nerve with a much broader base of viewers in part because of the rich history it explores and more significantly, because the findings are rooted in technology-fueled analysis.

"It's the age-old adage ... one test is worth a 1,000 expert opinions," says Geoff Desmoulin, the host and engineering whiz behind "The Deadliest Warrior," who works as a biomedical engineer in his day job at Optima Health Solutions International. The history on the show informs the viewers, but also brings them closer to the warriors, getting inside their heads and helping viewers choose a side, Desmoulin adds. Still, it's the tests, especially the frequent surprises that are often the primary draw. "While these weapons are designed to kill, our tests reveal that the killing potential depends highly on the operator behind the weapon (high skill/low skill), what the target is (hard/soft), and what type of rounds (hollow, jacketed, type of core, armor piercing, caliber, etc.) are used - all different outcomes depending on how these parameters are tweaked," he explains. "Our show provides a gritty, but more scientific look into the results of the use of these weapons without the Hollywood effects."

That said, even Desmoulin admits there's a bit of Hollywood in The Deadliest Warrior's testing practices. The starring role in the testing process has to go to the lethal weaponry and lifelike dummies filled with ballistic gel to mimic the density and viscosity of human flesh. Often, there is blood, albeit manmade, and even animal carcasses on set to prove the physical damage a particular weapon can impart. Yet traditional technologies and engineering tools, including sensors, load cells, accelerometers and speedometers play a critical supporting role as do National Instruments' LabVIEW graphical programming environment for measurement and control hardware along with its CompactDAQ data acquisition platform. National Instrument's DIAdem data management software is also used for visualization and analysis of the test data, and last, but certainly not least, is a proprietary simulation program that churns through thousands of battle scenarios to zero in on the outcome. The simulation software, based on a combat video game created by Slitherine Software, is harnessed by "The Deadliest Warrior" team to simulate the actual warrior battles and draw the final conclusions.


Once the match-up for a show is selected, the team zeros in on four weapons that would most accurately reflect those particular warriors. The goal is to choose a short-range weapon, a medium-range weapon, a long-range weapon and special weapon - for example, a scalping knife in the case of an Apache warrior. The show's panel of experts helps determine what weapons are used and how they are employed in combat. Based on their input and Desmoulin's engineering expertise, the team zeros in on the types of testing that will generate the most realistic and accurate data, all of which will be dumped into the combat engine to feed the battle simulation. "My role is to get data that describes something about the weapon that we can use in the simulator - it may be strictly a kill or no kill separation or as fine as ... a tension test on a spine," Desmoulin explains. "I'm trying to develop numbers and measurements around the weapons to help determine the damage."

The team has only three days to create and film each episode, and the goal is to run four tests a day. The extremely tight production schedule presents the greatest challenge to developing and administering tests, not to mention, generating accurate and reliable test data, Desmoulin says. Given the time constraints and the need to have a test and measurement platform that is flexible and easily configurable, CompactDAQ and LabVIEW were a natural fit, according to Caroline Tipton, data management product manager at National Instruments, who is part of the NI team collaborating with "The Deadliest Warrior."

Under Desmoulin's direction, the team typically runs a number of different tests in a short amount of time, often using different and frequently donated sensors. Because CompactDAQ is a modular, USB data acquisition system, it can be easily be connected to a load cell or an accelerometer and changed out without any major reconfiguration. "The number one challenge is time," Desmoulin says. "Setting up for a test, collecting the data and tearing it down and setting up for the next test is an enormous task, especially if there is an awkward test to do. With CompactDAQ, we can set up different configurations with different modules and it's plug and play."

The LabVIEW graphical programming environment also lends itself to this constant reconfiguration. Instead of having to view and interpret test results from different instruments in separate software environments, Desmoulin's team can use one package to compare all the data. "Previously, whoever provided the accelerometer or load sensor would have their own packages, and it was difficult to compare and bring (the data) together," Tipton explains. "With this, they can grab all the measurements in one shot and have them in LabVIEW to compare."

While there isn't a regular testing regime for every battle, there are a few dependable standbys. For example, load cells are frequently employed to determine impact force of weapons to gauge whether they will break bone. Accelerometers have myriad uses, including strapping them to a fist to determine punch speed as part of hand-to-hand combat or placing them in the middle of a heavy bag to determine punch force. Orientation sensors are also regularly tapped to provide 3-D visibility for evaluating speed and impact velocity of bladed weapons or projectile weapons like sling shots or bows and arrows.

CompactDAQ integrates all of the data from the test results into LabVIEW, where Desmoulin and crew perform analysis and leverage the graphical programming environment along with DIAdem to visualize key points to present to the audience. "With LabVIEW, you have the option of looking at data with an engineering interface or you can have a nice graphical user interface for people (in the audience) who aren't so familiar with the squiggly lines I look at," Desmoulin explains. "Why show the audience all of the information when all they need to know is whether a bone is broken or not. With the help of NI, we created a few (visualizations) that once the squiggly line reaches a certain threshold, it shows a picture on the screen of a broken bone and it's an interpretation that's immediate to understand."

Once the test data is collected and properly analyzed, it is fed into the simulation program, which churns through approximately 1,000 battle scenarios, making a determination as to which warrior dominated and which weapon delivered the killing blow.

What's next for Season 3?

As "The Deadliest Warrior" heads into its third season, there are some changes planned, including those associated with the weapons testing. Desmoulin says he will become much more involved in planning the tests, designing them "to be more comprehensive, with more science in mind." Leveraging things as simple as a pendulum can provide far more detail, in terms of figuring out how two warriors' weapons - for example, a Samurai sword and a Spartan shield - might meet and cause impact in the air. "The producers wouldn't come up with a test like that - it's not at all visual for them," he says.

Desmoulin is a natural fit to spearhead this kind of more comprehensive testing. In addition to his biomedical engineering expertise and a specialty in blast-induced neurotrauma, Desmoulin has a military background and is a black belt in karate. Joining him on the 10-episode third season, set to air in the summer of 2011, will be former Navy Seal Richard "Mack" Machowicz, the former host and producer of "Future Weapons." His role will be to enhance viewers' understanding of the soldiers behind the weapons and to provide insight into the military strategies of the featured warriors. Dr. Armand Dorian will also return for season three, serving as the medical expert who analyzes the lethal potential of each attack on the human body and discusses what treatments were available at the time to administer to the wounds.

This well-rounded panel of experts, coupled with the on-going focus on technology to advance the testing and continuously improve the data that drives the battle simulation, will go a long way in fine-tuning the accuracy of the show's predictions. "Having seven expert opinions plus the data to back it all up gets you as close to making an accurate predication as doing a full-bore study," Desmoulin says. "It's the mix of the right amount of science and entertainment that makes ("The Deadliest Warrior") perfect for a TV show."
0 comments
Hide comments
Related