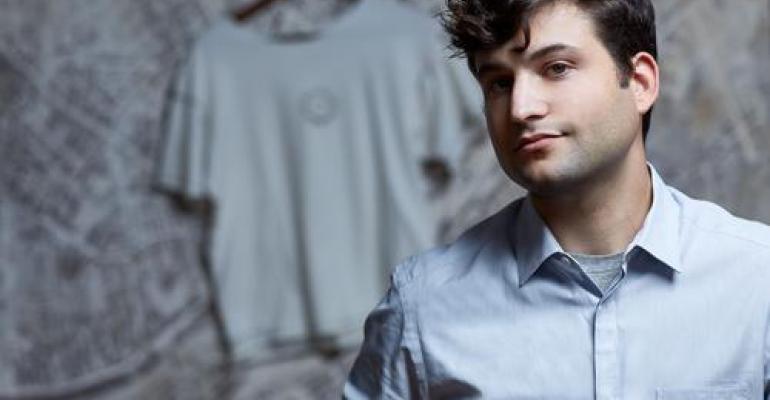 We've told you recently about robots that emulate the locomotion of snakes, slugs, and salamanders. But biomimetics isn't the only approach to robotic movement that engineers and designers are working on. Now there's an industrial robot arm that works with a sewing machine to construct an entire garment, courtesy of startup Sewbo.

Surprisingly, automation hasn't made much of a dent in industries that construct fabric into garments or other forms, inventor and startup founder, Jonathan Zornow, told Design News. The main problem is the inability of most robotic arms to handle limp, flexible fabrics. The automated construction of some simple shapes using various end-effectors is done to a limited extent in the production of seat covers for cars and airplanes. But constructing more complex shapes such as a complete garment hasn't been possible before.

Last week, Sewbo announced itself to the world by way of this video showing its proof-of-concept: a highly flexible industrial robot arm, an off-the-shelf Universal Robots UR5, guiding fabric to a consumer machine to sew a cotton T-shirt. The Sewbo concept changes the game by temporarily stiffening fabrics with polyvinyl alcohol, making them as easy for the robot to pick up as if the fabric were sheet metal, said Zornow, who's already in commercialization talks.

"The stiffening process works on every fabric we've tried it with so far," he told us. That includes cotton/poly blends, denim, lace, and some upholstery fabrics. "It's limited to fabrics that can get wet all the way through, so it's not suitable for coated materials, like leather or materials that have been treated to be waterproof."

In the video, the robot, which was rented, is a six-axis collaborative robot commonly used for low-weight processes such as pick-and-place and testing. But virtually any programmable arm could be used. "If it's moving in 3D space to make more complex shapes, you'd probably need all six axes," said Zornow. "There's a lot of sewing work that happens in 2D space, so you could use one with fewer axes for that. Although some of this is a universal concept, it would require work at every step to tailor it for use in a specific factory setting." 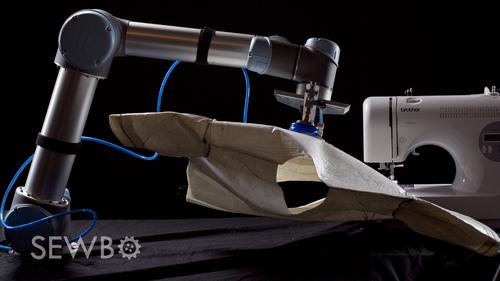 Instead of pins that hold the seams together during sewing, an ultrasonic welder is used to temporarily bond the edges of the stiffened fabric pieces. Because it's a thermoplastic the stiffener can be heated to become pliable, be reshaped, and hold its -- and the garment's -- shape when cooled, allowing a lot of pliability where and when it's needed. Once the object has been constructed the process is reversed, producing soft, fully assembled garments.

There are several possible applications, including uniforms. The military is interested in the Sewbo concept, "and we're exploring it with them," said Zornow. Others range from cheap reusable grocery bags to upholstery, or medical scrubs. The company is in talks with factories, integrators, and automation contractors. 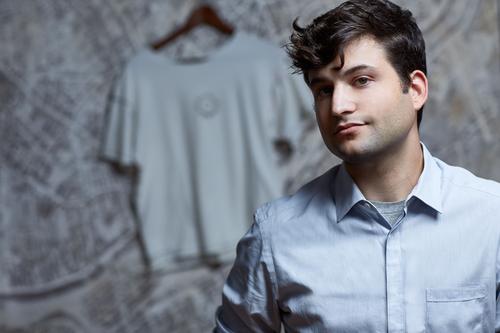 Zornow said that since new technologies don't need to be created, the goal is to do everything off the shelf if possible. The rest would be any customized tooling that's needed, such as for building out a factory. The idea of the company is to license Sewbo's IP to manufacturers.

Zornow said he came up with the concept when reading about water-soluble temporary support structures used in 3D printing, which are made of materials that can be melted and molded. As these make possible objects that couldn't be created otherwise, he thought a similar concept could be applied to the garment industry. He studied economics and studio art at Brandeis University, where his sculpture thesis was a fresco-making machine called "Robotecelli."