2013 is turning out to be a good year for engineers because for the third year in a row salaries have increased, and this year the average salary has broken the six-figure mark.

Job satisfaction stays stagnant this year, but more than half of engineers remain satisfied with their jobs. The only factor that experienced a decrease this year is the average bonus.

Our latest salary survey shows that the average engineering salary has increased to $100,664. This is an increase from last year's average of $96,813. Similar to last year, 69 percent of engineers have had an increase in their base annual salary while only 2 percent have experienced a decrease. The remainder reported their salaries have stayed the same. 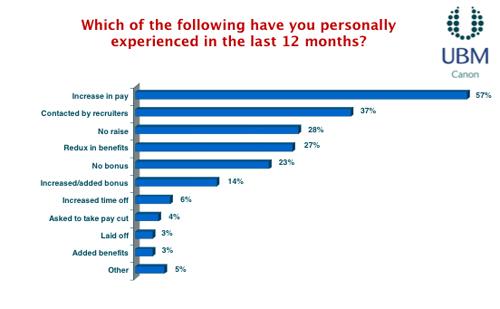 The 2013 expected bonus is down to $10,537 from last year's $11, 906. However, it is up from the 2011 bonus average of $9,440. Seventy-two percent of engineers said their bonuses have stayed the same, while 16 percent received an increased bonus and 12 percent experienced a decreased bonus. It is interesting to note that the percentage of bonuses that stayed the same, increased, or decreased were the exact percentages we reported last year, even though the average bonus amount in dollars is down.

Our engineer
This year's survey of design engineers in the US has the average age of 48 and has been an engineer for 18 years. These engineers have been with their present employer for 13 years and have been in their current position for nine years. Forty-six hours is the average workweek and 71 percent say their weekly work hours have stayed the same since last year. More than half of those surveyed work in electrical/electronics engineering or mechanical engineering. Other disciplines include manufacturing, software, and materials. Ninety percent have a degree in engineering. Those with a Master's degree or Ph.D. earn the highest average salary of $115,800 and an average bonus of $13,036.