Robots Unleashed: The Complications of Mobility 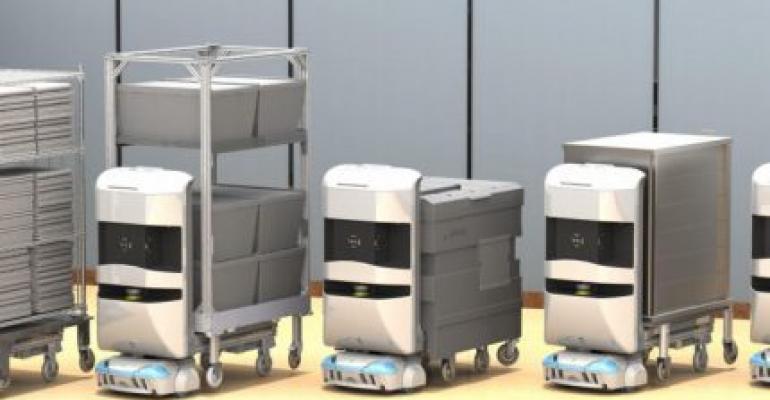 While collaborative robots can increasingly range throughout warehouses and other facilities, such capabilities mean new teachings for both the robots and their human coworkers.

In the age of the Industrial Internet of Things (IIoT), a mobile robot is not simply one that has wheels. Today’s collaborative robots can increasingly be thought of as small autonomous vehicles. They combine sensing capabilities, machine learning, networking, and more to perform a range of job functions in dynamic environments. Depending on their application, their features and capabilities can greatly vary, as a panel audience found out at the Advanced Design and Manufacturing Show in New York last month.

The panel, titled “Mobility: The Driving Force Behind the Growth in Collaborative Robotics,” was led by Design News senior editor Rob Spiegel. The panelists were Dave Saunders, CTO and co-founder of Galen Robotics; Karen Leavitt, chief marketing officer at Locus Robotics; and Marc Avallone, Aethon VP of channel management. Hearing the panel, what stood out immediately were the differences and yet similarities in the viewpoints of the three panelists, due to the different applications and purposes their robots serve. Among the topics they covered were the following points: what “collaborative” means to them, how they achieve their return on investment (ROI), cost trends, and the networking angle.

When asked what makes a collaborative, cooperative robot different from other robots on the market, for example, Galen Robotics’ Dave Saunders answered the following: “As we have robots with more advanced functions or certainly robots with more mass or little pointy bits that could hurt people, how those robots are designed to remain safe while still interacting with humans is a really big challenge…What is ideal for the conceivable future is to have homogenized ecosystems, where you have pools of humans doing what they’re good at and pools of robots doing what they’re good at.” To provide some perspective, Galen makes surgical robots, which currently tend to be stationary. Yet they have many of the same challenges as mobile robots because of the safety requirements for them to operate around (and on) humans.

“Dave’s robots operate in a sterile environment, while my robots operate in the antithesis of a sterile environment—warehouses, which are not only not pristinely clean, but they’re dynamically changing constantly,” noted Karen Leavitt from Locus Robotics. “A robot could go down an aisle and it could look a certain way, but then it could come back a minute later and the aisle will look totally different. There could be a forktruck in the aisle, someone could have moved a ladder into the aisle…they may have dropped pieces of merchandise that end up on the floor…Robots must dynamically reroute themselves and be able to avoid humans—but only just barely (a little bit better than the Roomba, but with only the narrowest of margins) because warehouses are so dynamically changing and very densely packed.”

“During a peak season like the holiday shopping season,” Leavitt continued, “you could have dozens of humans and robots operating in a fairly contained space. So the robots have to be able to be willing to pass within just inches of whatever obstruction they see—be it a human, another robot, a piece of infrastructure…and they have to be constantly adapting their view of what constitutes infrastructure.”

“The other way to answer that question is to flip it on its head,” noted Aethon’s Marc Avallone. “You won’t necessarily just have robots that have the technological ability to work around people; you also have to train people to work around robots. That’s becoming more common. It’s very difficult to walk into a warehouse or manufacturing facility without seeing some of this technology. As it becomes more ubiquitous, the paradigm will shift. People will need to know how the robots are going to interact. They will know what the robots are going to do—much like people know to cross a city street when the light gives that signal at the crosswalk without bumping into each other.” His perspective, of course, is one of logistics, as Aethon focuses on moving materials through facilities ranging from heathcare to hospitality.

Despite their differences, the panelists shared many similar views and approaches when it came to how they calculate ROI in robotics: labor. Avallone noted, “Labor is the biggest part of that. Whether you’re in a facility with material handling or in a hospital setting with pharmaceuticals being delivered, labor cost is the number one factor for ROI. Sometimes, it’s just the cost of time. If a robot can be programmed to do that, you don’t have any downtime.”

They also agreed on the fact that falling prices for sensors and other parts have greatly improved robotics capabilities. Leavitt stated, “We’re really seeing Moore’s Law at work here and it’s largely due to the automotive industry. The robots developed there can now be used in other applications and the price points have come down. If you can build a robot chassis that allows for the modular inclusion of the hard tech as scanners, vision systems, etc. evolve, you can swap out technology and swap in new using sensor fusion technology. As a result, you can continuously improve the robots and have functionality go up while costs go down.”

At one point during the panel, moderator Rob Spiegel asked, “What about connectivity? This past summer, in a hospital setting, I saw one of Marc’s tugs go by delivering pharmaceuticals from room to room. It picked up its materials on the first floor and delivered them on the second. Yet it had no arms to work the elevator. So connectivity is involved in ways that we didn’t think of; let’s talk about how robots are interacting with IT.”

“Our robots operate in fleets as well,” stated Leavitt. “At peak ecommerce times of the year, those fleets get larger, so the robots have to communicate among themselves. 10 times a second, each of these robots is making a decision about what it’s doing next and what it’s seeing. This is done via WiFi. For example, if an aisle has an obstruction, it will notify other robots so they can reroute themselves. They also use some low-energy, local proximity networking to detect humans so they don’t pick the same orders or repeat other tasks.”

Saunders weighed in: “All of our robots dial home; I have logs of every move made by every arm. That’s important to me because I don’t want any downtime for my robots that are supposed to be helping people. So this helps me predict maintenance. I also know if a robot is being used in a lower-utilization area.”

Find out more about the insight these experts shared about various aspects of collaborative robots by watching our Facebook Live video below:

Nancy Friedrich is Editor-in-Chief and Content Director of Design News. With a 20-year background in covering the electronic and mechanical engineering segments, Nancy has expertise across many areas. At Design News, she focuses on wireless and related areas.