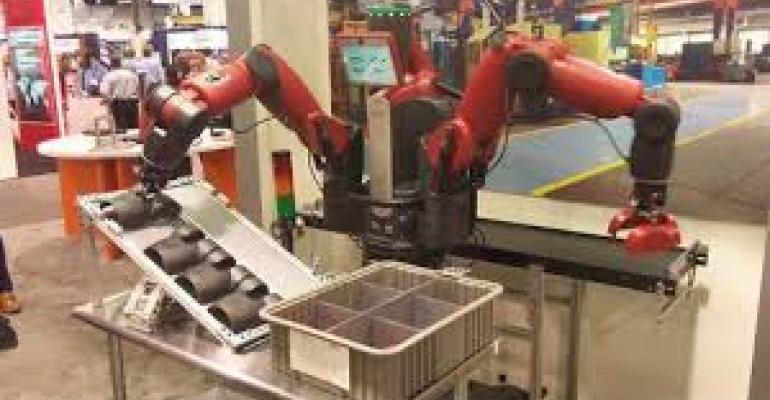 At the Pacific Design and Manufacturing Show, robot makers acknowledged that robots will replace human workers.

One of the ongoing fears repeatedly voiced about the proliferation of robots in manufacturing and logistics is that they will gobble up jobs needed by humans. In the session, "Will Collaborative Robots Even Replace Human Workers," that was presented as part of the Pacific Design and Manufacturing Show in Anaheim this week, panelists conceded that – yes – robots are replacing human workers. But panelists also insisted that robots were needed because of the tight labor market in logistics and manufacturing.

The economy is generally considered to be are nearing full employment, with the stock market lately showing volatility over the possibility of rising inflation due to a tight employment market and the resulting higher wages. One solution for manufacturers and warehouse managers in the face of rising labor costs is to increase automation. At the Anaheim, Calif., show, panelists agreed the robotics is a natural solution to that issue.

The panel included two representatives from robotic arm makers – David Dechow, engineer for intelligent robotics machine vision at FANUC, and Craig Tomita, a sales manager at Universal Robots. Two others on the panel – Melonee Wise, CEO of Fetch Robotics and Karen Leavitt, CMO of Locus Robotics – represent companies that provide robots for logistics. While the panelists differed on their views about the degree of human worker displacement that will occur, they all agreed that robots are replacing human workers.

The panelists pushed back on the idea that worker displacement will cause societal problems. Bill Gates, for instance, recently suggested that robots should be taxed so funds could be raised to help those who lose jobs because of automation. Wise responded to the common complaint that laborers affected by automation will need retraining for jobs that haven’t been displaced by robots. “Isn’t retraining a good thing? Don’t we want to retrain our workers?” Leavitt suggested that we create jobs that require no training. She noted that robots can show workers what they need to do and how to do it.

While the panelists agreed that robots will replace may of the jobs that Leavitt referred to as “mind-numbing repetitive manual labor,” they also held that artificial intelligence will not soon be snatching jobs from smart workers in factories or warehouses. “We’re not going to see artificial intelligence replace workers in my lifetime or any lifetime,” said Wise. She insisted that once you program a robot to do a task – no matter how complex – it’s no longer artificial intelligence. Her fellow panelists concurred, noting that computer programming cannot replicate the vast complexity of the human brain.

In defending the advances in technology represented by robots, panelists pointed to other industries where automation has replaced jobs. Wise noted that the proliferation of ATMs had the effect of replacing bank deposit transactions without lowering the overall number of bank employees. Research from the American Enterprise Institute backs her up. While ATMs reduced the average bank branch from 21 to 13 workers, banks responded by opening up more branches, since branches will fewer employees were less expensive to operate.

The panel on robots replacing human workers was part of a day-long conference track at the Pacific Design & Manufacturing event that examined the impact of robotics on manufacturing and logistics. Other sessions looked at safety, mobile robotics, and collaborative robots.