Robotic Fingers Are Learning How to Feel 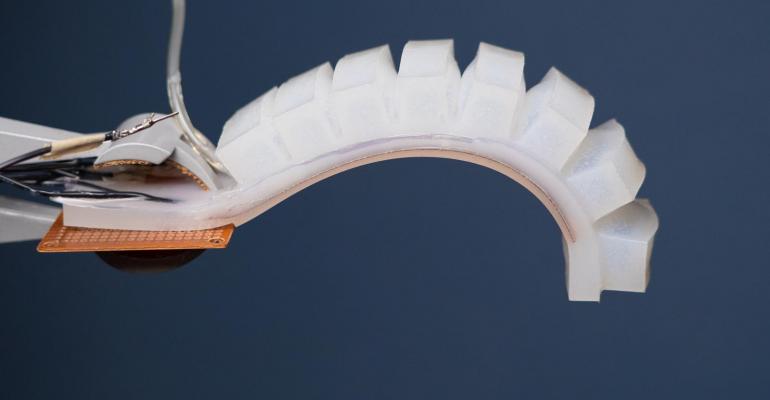 UC San Diego researchers are using neural networks to give robotic fingers a level of sensitivity similar to humans.

A team of researchers at the University of California San Diego's Jacobs School of Engineering are developing a touch perception system for flexible actuators that could someday give robots human-like fingers that also have human-like sensitivity. The project was conducted within the Bioinspired Robotics and Design Lab, headed by Professor Michael Tolley. The lab is also associated with the larger Contextual Robotics Institute.

There work was published in a recent issue of the journal Science Robotics.

Benjamin Shih, a mechanical engineering doctoral student at UC San Diego, and one of the team members told Design News the idea was to develop an embedded touch perception model using machine learning. The team used a motion-detection system to provide feedback to train a recurrent neural network and then disconnected that system when the training was complete. The process could be compared to teaching students to play the piano with the lights on, then turning out the lights and having them demonstrate the skill relying solely on their sense of touch.

"We're not explicitly computing our kinematics in real time, but we're not learning entirely from scratch each time either,” Shih said, describing the model. “If you draw some parallels or inspiration from biology, like how people learn how to feel and recognize objects, or how far away something is, it's some combination.”

Experiments were performed with the actuator deployed in free space as well as with it in contact with on object along its length and at the tip allowing one and two degrees of freedom. Shih said the project has given him a new appreciation for the "incredible resolution" of human skin.

For their project, the researchers produced a set of soft strain sensors consisting of layers of polydimethylsiloxane (PDMS) impregnated with conductive carbon nanotubes (cPDMS). These were embedded in layers of a finger-like actuator. These soft sensors do not constrain the range of motion as much as the more conventional rigid strain sensors do, thus enabling a larger work space.

They are, however, less accurate at present, and subject to drift. This shortfall was compensated for, at least in part, by the use of multiple redundant sensors. The sensors each provided a single undifferentiated output for any type of strain (e.g. tensile, torsional, compressive, etc.) but the combined output was enough to provide a reasonable approximation of the location of the actuator and the forces it was subjected to.

There's little question that robotics will soon play an increasingly important role in our workplaces, our homes and our healthcare. With that comes the potential for them to inflict damage or harm to people or property. Improvements in precision and responsiveness will, of course, help, but the use of softer, deformable materials will also play an important role. The problem with deformable materials, is their non-linear behavior, which makes controlling them a challenge.

Additionally, in the uncontrolled "real world" environment these robots will be operating in, they must be prepared for unexpected events, such as contacting external objects, without becoming disoriented. This suggests the need for some type of embedded kinematic model that groups such as researchers from Columbia University have been developing.

Other work along these lines includes the work of professor Lei Sun at Nankai University in China, who has developed an algorithm for improved control of series elastic actuator systems. Meanwhile, researchers at the University of Colorado are examining the use of dielectric elastic actuators to provide muscle-like behavior.