Rise of the Augmented Worker 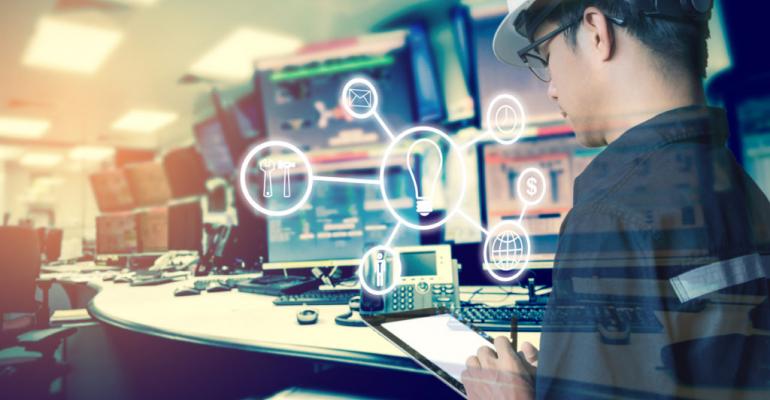 At the Atlantic Design and Manufacturing Show yesterday, Chris Kuntz of Augmentir explained how augmented reality and artificial intelligence are changing how manufacturing workers learn their jobs.

Augmented reality (AR) technology is beginning to change how workers are trained in education, healthcare, entertainment, and gaming. Now it's entering manufacturing. In the session, The Rise of the Augmented Worker – How Augmented Reality and Artificial Intelligence Will Revolutionize Manufacturing, Chris Kuntz, VP of marketing at Augmentir, explained how training in AR can improve productivity, efficiency, and safety in the manufacturing setting. He also shared insights on how Artificial Intelligence (AI) can be combined with AR to deliver manufacturing knowledge.

One challenge facing manufacturers is the retirement of Baby Boomer. Those skilled workers are leaving the plants with decades of knowledge. “There is a lot of intelligence and expertise in the aging workforce that is leaving,” said Kuntz. “Companies are trying to figure out how to take that knowledge to new younger workers. Yet there is not a lot of insight into how to capture that knowledge.”

Knowledgeable workers are leaving at the same time the company needs to improve its manufacturing operations. “While companies are losing their most knowledgeable workers, they are also struggling to improve their manufacturing processes. They know that traditional classroom training is ineffective in teaching these skills,” said Kuntz. “Meanwhile, they are using paper to distribute work instructions. They’re realizing something has to change. The frontline working is only marginally connected to digital knowledge.”

Turning to Augmented Reality for Training

In order to train workers effectively, companies need to learn exactly what goes on in each worker’s job. “There’s not much known about what happens at the workstation, and you can’t fix that if you can’t see what needs to be improved,” said Kuntz. “Enter augmented reality. We’re beginning to recognize that augmented reality can transform how workers are trained while also capturing the tasks at each workstation.”

AR and AI are forms of automation that are designed to make workers more productive, not eliminate them. “Augmented reality helps workers rather than replacing workers,” said Kuntz. “There are a lot of success stories with augmented reality training in manufacturing. It’s a matter of using a hands-on approach to train the workers rather than traditional classroom learning.”

The Slow Adoption of AR and AI Is Changing

While manufacturers are becoming aware of the benefits of AR and AI, there is also trepidation over the process it takes to deploy these tools. “So why isn’t this widespread? For one, it’s hard. Traditionally, adopting enterprise software is a long process. The same with AR. The process is slow,” said Kuntz. “Manufacturers are now in a pilot at most. The investment can be $100k to $200k just to see if it might offer results. Now that’s changing. There is an emergence of new software. The new software is designed for the end user. It’s easy to try, easy to buy, easy to own, and easy to dis-own.”

AI can be used to streamline the adoption of AR. “Companies don’t have the resources to explore every possibility. AI plays a role here. The augmented worker operates with guided step-by-step instructions with AI overlays,” said Kuntz. “Training much more effective if it’s accompanied by videos and access to remote experts. AI is used to deliver personalized instructions to the worker on tablets or with glasses.”

Using AR to Get a Picture of the Entire Workflow

A side benefit to AR training – and a potentially big one – is the view manufacturers get into what goes on at the workstation. “A new area in AR deployment is the ability to collect that information and bring it back so managers can see who is learning and how,” said Kuntz. “Where did they struggle? Where did the process stop for five minutes because the worker couldn’t find a tool? The ability to capture that data is a huge value in improving the productivity and safety for the worker.”

Tying the AR and AI at the workstation into other plant systems can give manufacturers a full picture of overall operations. “The data for the frontline worker can be sent to the workstation by IoT systems and ERP systems that are delivering work orders,” said Kuntz. “Then you can analyze the worker data. You’ll get a complete picture of what’s going on across the entire workflow. To get there, AR needs to be integrated across the entire workflow.”