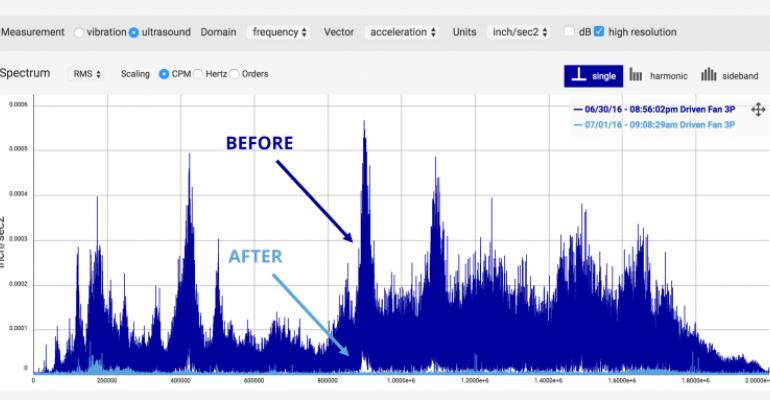 The sounds machines make reveal quite a bit about whether they’re working properly – what’s wrong and what’s not. The first thing an engineer does when a machine doesn’t seem to be operating properly is to listen to it. In the past, the machines themselves had no way of listening to their own sound to determine health, and therefore they had no way to alert the automation staff that something is wrong. That’s changed.

Recently, Augury, a predictive machine diagnostics company, added sound sensors to its range of condition monitoring. The company designed tools that listen to any machine – from a jet engine to a household appliance – and run it through an algorithm to identify what’s wrong and even predict what’ll break next.

In developing sound analysis, Augury hones in on specific types of equipment. “We focus on three types of machines: pumps, fans, and chillers or compressors. Within these three families we can diagnose any of the machines we encounter,” said Saar Yoskovitz, CEO of Augury. “We don’t need to generate an algorithm for this pump versus others. The sounds these machines make have a unique fingerprint and we can detect it across any model. Like a fan belt squeaking. It doesn’t matter whether it’s a Mercedes or a Toyota, a fan belt sounds like a fan belt.”

Ultrasonic and vibration sensors are common in predictive maintenance. The difference with Augury's sensor processing is that it's Internet- and algorithm-based. The data is sent to servers where it is compared with previous data collected from that machine, as well as data collected from similar machines. The platform then detects changes. “We rely on a specific model for your specific machine and analyze it during its operational day so we can alert you to changes,” said Yoskovitz.

The automation industry has seen an increase in interest in condition monitoring since Baby Boomer engineers with decades of experience have retired. Those engineers could listen to a machine and instantly determine its operating health. That’s a hard skill to pass on to a new engineer. “You only have two or three years to infuse the expertise that is leaving with the Boomer,” said Yoskovitz. “Technology is the best bet for replacing that expertise. It’s not a matter of replacing the expert. It’s a matter of making the expert more efficient. Plus, we can detect things that are not audible yet.”

Augury is working within another trend in condition monitoring: offering the monitoring as a service rather than providing equipment. “We call it diagnostics as a service. Instead of selling a machine, we sell the function,” said Yoskovitz. “Vibration tools cost over $20,000 for the hardware. Then you’ll also need an expert and software. Our model comes with no upfront fee. You pay as you go.”