HomeAutomationRapid Prototyping Tools Showcased at SolidWorks World 2009
Recent
Automation
Q&A With IndyCar Gearbox Expert Anna Chatten
May 13, 2022
Intel Unveils Trust Authority to Boost Security
May 13, 2022
Supplier News Looks at Highly Customizable Industrial Monitors
May 12, 2022
Here Technologies Maps are Key to Mercedes Level 3 Automation
May 12, 2022
POLL
'We Built the Domino's Pizza Tracker for Manufacturing'
May 12, 2022
Break Your Bubble Gum Habit by Watching Its Production
May 12, 2022
This Patch Monitors All Your Vitals, Including Blood Pressure
May 12, 2022
First E-Skin to Anticipate, Perceive Touch from All Directions
May 12, 2022 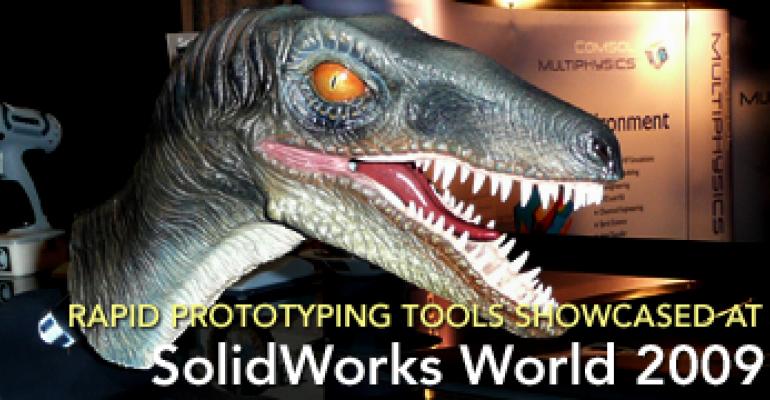 Orlando, FL -- Rapid prototyping system vendors are out in full force at this year's SolidWorks User Conference, each stressing the advantages of their tools over their competition's â€“ from the fastest processing times to the biggest footprint to multi-material models.

Most striking, though, was the almost universal emphasis on lower price points, making these tools surprisingly more affordable for design teams looking to produce models from their CAD data for visualization, communication and in some cases functional testing. And, really, who doesn't need a system of their own to do all that?

Everybody, apparently, if the marketing folks have anything to say about it.

At $14,900, the uPrint by Dimension (www.uAPrintDimension.com) is an economical choice that's marketed as a personal 3D printer that really will fit on a desktop (the footprint is 24 X 26 inch). Despite its relatively tiny size, the printer creates form-fit-and-function parts in plastic.

Bruce Bradshaw, director of marketing at Objet (www.objet.com) pointed Design News to the Alaris30, an entry-level system the company introduced in October. Priced at $40K, the unit is nearly 50 percent less than the previous starter model. Bradshaw says there's some economies of scale associated with selling higher volumes of systems, but also a few trade-offs in features. For example, the unit produces single material parts, while the much higher priced Conix can print dual materials at bigger sizes.