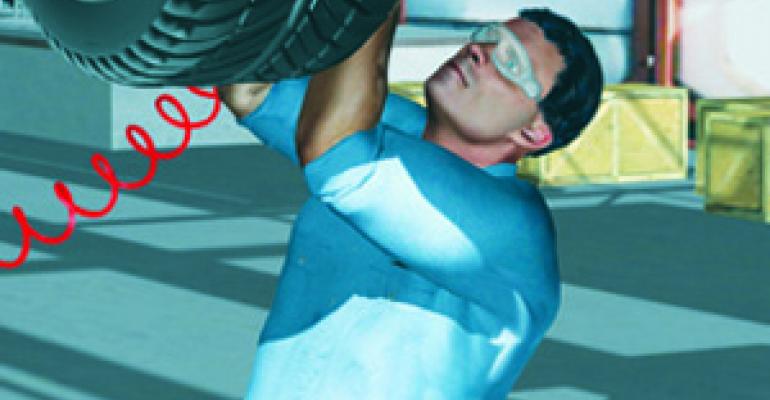 There are avatars and then there is Santos.

Thanks to the broad availability of digital human modeling software, avatars are playing a more prominent role in evaluating the manufacturing feasibility and safety issues surrounding both product designs and assembly line ergonomics, mitigating the need for costly physical prototypes. Yet while most currently available avatars are digital representations of the static human form, the University of Iowa's College of Engineering's Center for Computer-Aided Design is taking the concept of human modeling a step further with Santos, an avatar that is a high fidelity, biomechanically accurate model of a person, including the physics of bone and muscle.

The combination of the biomechanical musculoskeletal model along with predicative dynamics technology means Santos just doesn't just mimic biomechanical motions - the avatar is being designed to predict motion and to react to movements on its own. Santos doesn't just sit in the cockpit of a tank or move a piece of equipment from Point A to Point B on the factory floor so engineers can evaluate reach and other ergonomic factors. Instead, the digital avatar's physics-based approach can deliver feedback on how a certain type of task or combination of movements will impact a human's level of fatigue, speed, strength and torque over a period of time.

"We're really trying to understand how a human behaves from a biomechanical point of view - why they take this particular motion or posture, and can a person really complete this task," explains Karim Abdel-Malek Ph.D., professor at the University of Iowa's Dept. of Biomedical Engineering, director of the Center for Computer-Aided Design and director of the U.S. Army's Virtual Solider Research (VSR) program, the birthplace of Santos, which is funded in part by the U.S. military. "Any time you're carrying a box from the ground up or swinging an engine - anything to do with motion and dynamics - there are moments of inertia involved that are not accounted for if you're just doing static analysis (of human modeling). The new thing is physics, which adds a real-world element of reality to it."

The Santos project got its start in 2004 at the University of Iowa and through the years has received a variety of funding from partners, including several of the major automotive manufacturers, among them, Ford and General Motors, in addition to other Fortune companies like Caterpillar to its most prominent proponent - the U.S. military. This April, in fact, the VSR team was awarded a five-year contract valued at up to $8.6 million from the U.S. Navy for Santos' work related to a project aimed at helping military personnel carry lighter loads into combat. The project, formally known as "Enhanced Technologies for Optimization of Warfighter Load" (ETOWL), is being conducted for use in both the Navy and Marines, using Santos to simulate the effect of equipment loads on military personnel from the standpoint of mobility and physical stress without having to place real human fighters in the field. Among the project's deliverables: A set of computational modeling tools along with easy-to-use planning tools that leverage the models to enable small-unit leaders to evaluate the trade-offs of different equipment profiles across a squad for better decision making.

Given the fact that the military, just like mainstream business, is dealing with budget shortfalls, virtual prototyping and avatars like Santos are key to designing optimal gear without adding millions of dollars in costs or years of prototyping time to the development cycle. "The very top generals have identified modeling and simulation as the key component that will save their design cycles cost and time," says Abdel-Malek.

Depending on the project, the different military branches will be able to outfit Santos with different gear, a war-time backpack, for example, and test such factors as how carrying the pack reduces a soldier's mobility or what kind of physical stress is created by carrying the load for an extended period of time. Traditionally, the military has done this kind of testing with physical prototypes of proposed equipment on real-world soldiers, oftentimes, in the field.

"It takes a whole team of people to make decisions on this stuff and before they make any kind of decision, they test the gear on different types of bodies," Abdel-Malek says. "It takes forever to do that and it's difficult to make design changes and then go back and retest. With virtual prototyping, we give them a tool that saves them an incredible amount of time. And by predicting motion, they don't have to bring humans in."

In anticipation of similar needs in the corporate market, the VSR university team in 2008 spun off Santos Human Inc., a company charged with bringing a commercial version of the digital human modeling software to the commercial market. Honda, one of Santos Human's corporate partners and a beta tester of the technology, currently employs digital human modeling software as part of its V6 implementation of Dassault Systemes' CATIA 3D CAD and DELMIA digital manufacturing software. Despite the utility of these programs, the physics-based Santos will up the ante in terms of evaluating fatigue factors or determining if a bend or reach is too much over a period of time during an employee shift, according to Bryan Beeney, engineering coordinator at Honda of America's East Liberty plant.

"The physics-based approach will show a reaction as a human body does," he says. So, for example, if you put weight on the body, Santos can display what the human body will do to accommodate the additional weight - perhaps spread out the feet to find balance or lock in the hips to hold up the weight. "With a lot of these programs, you can load 80 pounds on an avatar and nothing changes," he explains. "The data in the background changes, but visually, the avatar is static."

Ford, another Santos partner, has had great success with reducing factory floor injuries by employing traditional human modeling programs, including Jack from Siemens PLM Software. Today, digital Jack or Jill avatars assemble vehicles in the virtual world while a team evaluates manufacturing feasibility and assembly sequence, all well before any physical parts are produced or tooling or workstations configured. While this approach has allowed Ford to reduce ergonomic issues related to its assembly operations far earlier in the R&D process when it is far less costly to reconfigure designs, there is even greater opportunity with Santos, according to Allison Stephens, Ford's global technical leader in Assembly Ergonomics. Specifically, Santos will allow Ford to evaluate the long-term effects on tissue breakdown as it relates to repetitive tasks on the factory floor over the long term, which as Stephens says, takes things to a whole new level.

"The model is smart enough, because it's physics-based, to calculate how much muscular force is needed to climb into a car, hold up an instrument panel or reach over to the center of a vehicle with a power tool to make something secure," she explains. "This is not about comfort, but rather more about can I expect someone to do that once a minute without going to the point of tissue damage or muscular fatigue."

In the days prior to any kind of simulation, Stephens' team would average around 300 design changes per vehicle due to ergonomic issues related to factory floor operations, costing as much as $45,000 per change because they were caught and made far into the design cycle. Static simulations through the use of Siemens' Jack have helped Ford reduce that number by 90 percent, but Santos can help push it even further. "Even though we're down to only 30 issues (per vehicle), we're still getting injuries on the plant floor because that requires more complex motion evaluation," Stephens explains. Long term, she hopes to keep Siemens' Jack on hand for static hand clearance and reach evaluations while leveraging Santos to do more complex and full simulations to understand the cumulative impact on auto workers.

While Stephens is hopeful about Santos' promise, she admits there are still nagging technical hiccups that prevent the software from being exploited to its full potential. Abdel-Malek, acknowledging the shortcomings, says we're likely to see significant progress within the year that will ready Santos for a prime-time appearance.

"The environment is so well-prepared now (for this kind of technology) with all of the understanding of avatars, gaming and Hollywood," he says. "There's been an incredible boost in terms of understanding what it is and how it can help."
0 comments
Hide comments
Related
You Might Like