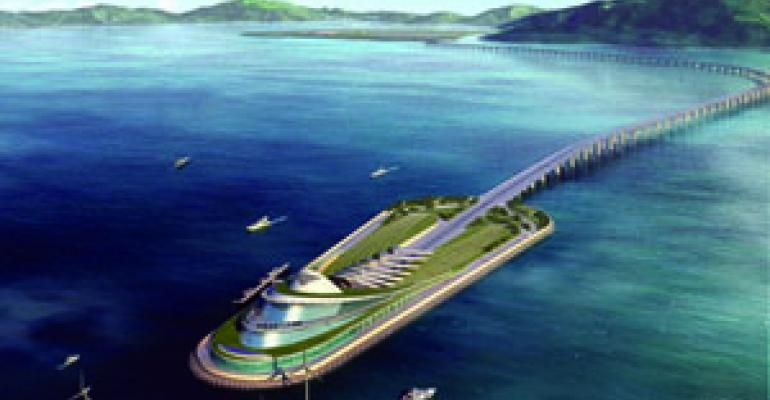 One of the world's largest vibratory pile drivers, the Octa-Kong, will be used to erect the Hong Kong-Zhuhai-Macau Bridge in China. The machine, being built by American Piledriving Equipment Inc., uses 14 gearboxes to regulate the timing on the vibratory power transmission for the apparatus needed to secure the pilings in the riverbed or sea floor.

"The toughest part of this job was to get the shaft keyways aligned properly in orientation to the spiral bevel gear teeth," says N.K. Chinnusamy, president of Excel Gear Inc. "The difficulty involved here was staggering."

Chinnusamy notes that special fixturing had to be built to facilitate the orientation of the keyways in the shaft and holes in the spiral bevel gears. But the very first test runouts resulted in keyway alignments within 0.0005 inch of parallel.

In only 10 weeks, Excel Gear fully manufactured, tested, assembled and shipped the gear boxes. Using a "design for manufacturability" approach, the company manufactured the spiral bevel gears and machined the weldments and forgings, along with engineering special Teflon seals. It also created special stainless-steel breather caps and holes to accommodate the pressure build-ups and air dissipation requirements of the system. The drive shafts and bevel gears were then heat-treated, assembled, and finally tested in the company's quality inspection lab. Each component was hand-washed and inspected for chips, then alcohol-wiped, run with oil, inspected and re-cleaned.

Watch videos of the machine design, as well as an overview of the bridge project.

The 14 gearboxes, filled with Mobil 626 synthetic oil and protected with special Teflon bearing seals, are used in pairs at each of eight stations to provide the sequential vibration to the massive assembly that holds the piling above the insertion tube. As the piling vibrates, it literally shakes its way into position.

Designed for Travel and Operation

Since the system will be transported on a barge, if the pile driver system has any problems with the gearboxes when it arrives, the entire system will not work. To withstand very severe vibratory conditions, the unit construction needed to be rigid. All of the screws were wired, so nothing could come loose, and a "shrink fit" was used to guarantee the integrity of the assembly.

"When we shrink fit a bevel gear to a shaft, there is a concern we might lose the precision timing required for the application. So we had to make a special fixture for it to achieve the manufacturability goals of building the gearboxes right the first time," says Chinnusamy. "The challenge was to build the units in eight to 10 weeks, and also make it work in the application."

The timing of the gearboxes was the number one critical issue, especially to achieve the timing specification of 0.005 inch. This unit is a timing gearbox and is structured to rely on the precision of the gears.

"We didn't have time to make a prototype and then test it and make adjustments. We also made all 16 units at the same time," says Chinnusamy. "The very first unit we inspected was within 10 percent of the customer's specification and subsequent units were all close to each other."

Eight structures in the pile driver machine are configured in an oval shape to drive the piles with the drive shaft on each of the two gear boxes used to connect a set of two. An oval-shaped raceway and the larger structures are placed between the gear boxes with the long shaft connecting the structures. Using mechanical timing as a critical part of the design, the gearboxes were timed so well that American Piledriving Equipment could use a standard coupling.

To get the proper backlash and contact pattern in the system, the spiral bevels needed to move in and out very precisely. If one pattern on the bevels was too far in or too far out by only five thousandths of an inch, the contact may not have been good enough and could create vibrations or break the teeth in the mechanism. Plus, all of the gearboxes had to be inspected to be sure the gearbox parameters were within tolerances.

"Aligning the keyways and holes in the shaft to the spiral bevel teeth is very difficult," says Chinnusamy. "The problem is that spiral bevel teeth are curved and the holes in all 30 of them need to be exactly the same. When we assembled the gearboxes onsite, we had to be sure they were in the same orientation. We made a special fixture, so before the gear went onto the shaft, it was all oriented properly."

For the assembly process, you only have 10 to 15 seconds. If you don't do it quickly, the heat transfer immediately swells the part. Everything has to be timed precisely. Another difficulty, because it was also shrink fitted, is the need to heat the part and hold it when it's hot.