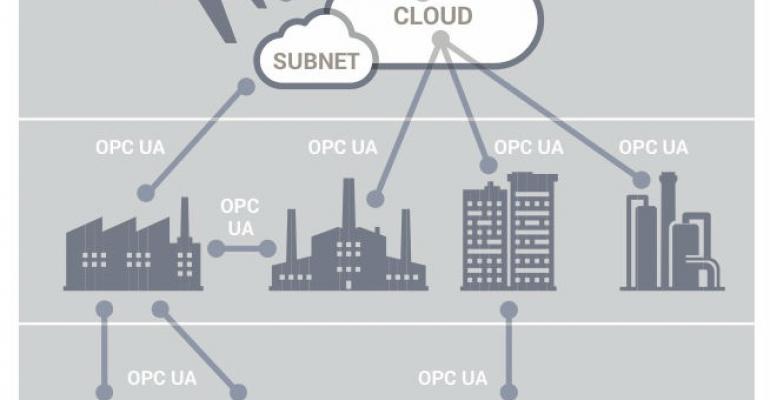 The release of Part 14 of the OPC UA standard known as Publish-Subscribe (“PubSub”) by the OPC Foundation is an important milestone for this key IoT technology. As PubSub continues to gain adoption in factory automation, it is set to enable further adoption of OPC UA on the shop-floor, where controllers, sensors, and embedded devices typically require optimized, low power, and low-latency communications on local networks.

The evolution of PubSub is also enabling use of OPC UA in cloud-based applications. Here, a virtually unlimited number of edge data sources, such as sensors, can supply data securely to internet-based broker applications over public wide-area networks (WANs).

According to Stefan Hoppe, global vice president for the OPC Foundation, the significance of OPC UA PubSub as a technology for establishing cloud connectivity is that it reaches an even broader scope of applications. “Today’s connectivity makes use of MQTT (mostly) or AMQP,” Hoppe recently told Design News. “Both transport data, but nobody agreed on the meaning of the data. OPC UA is a platform for interoperability, where you can model the data and interfaces, provide different built-in protocols for different scenarios, and provide built-in by-design security.”

One area that the new release has concentrated on is to expand the application use cases for OPC UA technology. Hoppe said that today, OPC UA “only” provides the client/server communication, meaning a confirmed communication. Extending that with an unconfirmed PubSub communication expands its reach into new scenarios, where small size of device matters or speed matters for near real time. “But in all use cases, messages might have been lost…which doesn’t matter as the next published data comes in quickly,” Hoppe added.

The OPC UA open standard has emerged as a de facto platform for implementing secure end-to-end data exchange between third party systems and for facilitating interoperability between third-party devices and applications. The release of OPC UA PubSub is an important basic milestone to be tunneled through real-time channel Time Sensitive Networking (TSN) to open up additional opportunities.

One key trend for 2018 in factory automation is the move toward Gigabit Ethernet coupled with looking at new, open, non-proprietary communications standards. For a large variety of reasons, Time Sensitive Networking (TSN) technology seems to be the favorite Layer II communications standard, combined with OPC UA as the data modeling standard.

These two technologies are being coupled together by a growing group of automation control suppliers as a way to create a new paradigm shift in terms of how to view the operational effectiveness and viability of field buses. Automation companies like National Instruments, Bosch Rexroth, B&R, ABB, Schneider, and others seem to be viewing this shift as an opportunity to unify communications standards in automation.

By strengthening Publish-Subscribe technology and expanding its marketplace acceptance among the supplier community, OPC UA technology is solidifying its central spot in the standards discussions related to IoT and Industry 4.0 communications.

Because the latest evolution of Publish/Subscribe is aimed at embedded devices, it adds a meta model for describing data, as well as a communication infrastructure for exchanging and browsing information. Along with that, OPC UA offers a built-in security model that helps to implement secure systems in accordance with upcoming standards like IEC 62443. Combined with OPC UA TSN, a growing group of suppliers believes it will be the prime candidate for establishing a holistic communication infrastructure from the sensor to the cloud.