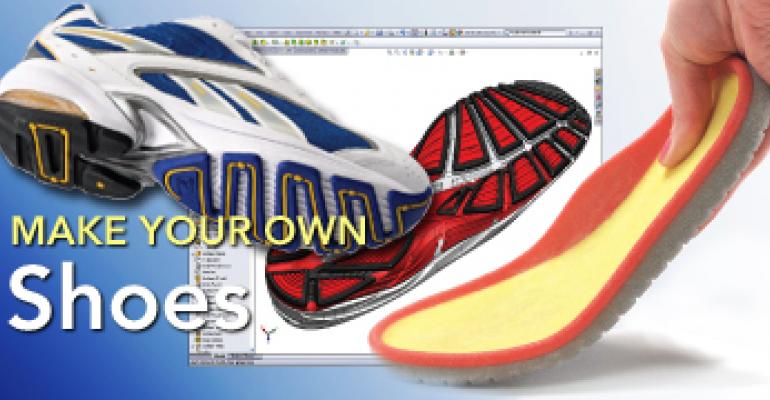 Someday a jogger may walk into a shoe store, pick out a style, and then order specific soles and other shoe components based on their weight, running style and other factors.

There's an emerging convergence of computer-aided design, digital manufacturing and materials technology that may be bringing very personal athletic shoes closer to reality.

A close look at advanced product engineering at New Balance Athletic Shoe Co. in Boston, MA, gives some insight into why. A single shoe sole may have 1,300 features, requiring a like number of molds and dies. Some sole designs may contain up to 1,800 features.

"The complexity at New Balance is due, in part, to the large number of sizes for each shoe, thanks in part, to an insight to offer wide sizes," says Sean Murphy, manager of advanced product engineering. New Balance is unusual among shoe manufacturers in offering the majority of its shoes in a wide range of widths. For example, men's sizes range from six to 20 with a width range of 2A to 6E. Styles include: running, walking, tennis, training, basketball, sandals and cleated.

"For the 993 (a men's running shoe with a blown rubber outsole), we offer 156 unique sizes," says Matt Dunbar, senior CAD designer for New Balance. "Even infant sizes are offered in wide and narrow."

That's when it gets interesting because molds and dies are produced for every unique size. What's even more interesting is that New Balance cuts steel molds even for prototype parts. "We have rapid prototyping equipment, but they are used more for look and feel prototypes," says Dunbar.

Look and feel doesn't cut it for athletic shoe prototype testing. To say they take a pounding would be an understatement. In a "smash lab" in the basement below a shoe manufacturing plant in Lawrence, MA, a jig built on a Z Corp. rapid prototyping machine pounds into a prototype shoe sole hundreds of times to test the material's performance. The MTS System is capable of replicating the exact force pattern applied by athletes over the course of a marathon to a shoe in 15 min. Based on a hypothetical 95 right foot strokes per minute, the winner of the 2008 Boston Marathon would have had more than 12,000 right foot strikes. But it took Robert K. Cheruiyot of Kenya 2:07:46 to finish the race.

And it's more than just materials performance. "On some of these we will design the cushioning for runners that land on the heel. For others we will test a design where the runner may land farther forward, and possibly even roll in from the side as their foot lands," says Pedro Rodrigues, one of the experts in biomechanics who runs New Balances' brand-new $2 million Sports Research lab in the basement of the former mill building located next to the Merrimack River.

Also at the 3,000 sq ft testing center is a Qualisys motion capture system capable of analyzing movement quantitatively or qualitatively at more than 1,000 pictures per sec. Separate sensors detect exactly what's happening with various muscles from a runner's thighs to his feet. Other sensors detect pressure on the soles of the foot, as well as temperatures in the shoes. Prototype shoes are also tested in the field by runners who send shoes into the lab for testing. Other tests measure how the prototypes perform for players in various sports, such as basketball and tennis. At any given time, some 10,000 pairs of shoes are being tested for periods averaging about six weeks.

Another piece of equipment in the lab is a glass-top Kistler Force Plate capable of analyzing forces athletes apply to the ground in all directions, while a camera captures foot landing on a plate from below.

The number of molds and dies cut just for prototype purposes is mind blowing. More than 1,000 for a single shoe sole? It's possible because New Balance uses tool builders in China, and tools aren't built for large part runs like they are for most injection molded parts. A single tool may only need to produce a few thousand parts. And the prototype tools aren't built with a lot of bells and whistles, or even cooling for that matter.

Murphy attended a mold cost estimating program at nearby UMass Lowell's Plastics Education Dept. recently, and laughingly recalled the high numbers being discussed for tools, like $150,000 and up. New Balance pays a very small fraction of that for its prototype tools.

The New Balance system clearly works and its approach to shoes is a winning model. New Balance is one of the largest suppliers of sports footwear in the world, with global sales of $1.63 billion in fiscal 2007. But it doesn't run with the pack in many important respects. According to Reuters, Nike spent $260 million on sponsorships last year. The Adidas Group, which includes Reebok, spent $90 million sponsoring the Beijing Olympics last year. New Balance eschews expensive sponsorship programs. New Balance also makes a different mark through a substantial U.S. manufacturing presence, even though much of the manufacturing and materials technology has migrated to the Far East.

The New Balance World Design Center is located in Lawrence, MA, and also features shoe manufacturing. Other manufacturing plants are located in Norway, ME, Skowhegan, ME and Norridgewock, ME. The company was founded in 1903 in Boston by an English immigrant named William J. Riley. Shoes don't have jazzy names, just numbers like the 1500 and the 1306. The strategy helps gives the feel of an old-fashioned company that puts emphasis on products and good engineering.

One of the hottest areas of technology development that could impact design and manufacturing at a company, such as New Balance, is direct digital manufacturing. It's based on the idea that you can develop short run parts with complex designs using additive fabrication technology that work directly from CAD files. As Murphy and Dunbar indicate, New Balance has significant complexity in its shoe sole designs alone.

Murphy was asked if New Balance considered using the approach as an alternative to making short-run steel molds. To date, it wasn't part of the New Balance plan. And given the deals in China today, maybe the economics aren't quite there yet. But they soon may be. At least that's the impression given by executives at companies that make the equipment and the materials.

The capabilities of the equipment rise exponentially almost yearly. And the big-name players in the materials' business are getting interested, developing special grades for the technology.

"As all of us get better and better, there is a blending in this whole industry between what is a concept model and what is a production part," says Scott Harmon, vice president of business development at Z Corp., Burlington, MA. Z Corp. is a good case in point. Its building block material for prototypes is an engineered plaster with numerous proprietary additives that enhance surface finish. The material provides high strength, but virtually no flexural modulus.

But Z Corp. has also developed an elastomeric material that offers rubbery properties like those required for shoe soles. In fact, virtually all of the major athletic shoe companies use Z machines, as well as other prototyping equipment, but just for aesthetic prototypes. The elastomeric material allows creation of shoe soles for look and feel before committing to a steel mold.

The fabrication process is interesting. A bed of material is placed on a build table, but a cellulosic material replaces the plaster. Also included are specialty fibers and additives. An inkjet printer head, directed by a CAD file, then prints a binder on the material creating the cross sectional area for the first, or bottom, slice. A piston then lowers the build platform 0.1016 mm (0.004 inch) and a new layer of powder is spread on top. The printhead then starts applying binder for the next cross section, which adheres to the first and so on. The printing process creates an exact physical model of the CAD geometry. The Z printers typically build 1 to 2 inches per hour. Z machines also print in color. Binders are typically made of water.

For the elastomeric material, the parts are moved to an adjacent infiltration chamber, where a two-part reactive system is applied. The resin infiltrates the model, consuming the cellulosic compound. The standard zp131 powder with functional infiltrant will produce parts with the following characteristics: tensile strength = 24MPa, flexural strength = 43MPa, flexural modulus = 10,400MPa, shore hardness = 87D and compressive strength = 98MPa. "With the elastomeric zp15e powder and a flexible infiltrant, you can get a range of performance depending on the exact urethane product you use to infuse the parts," says Joe Titlow, director of product management at Z Corp. "A shore hardness range of 20A to 70A is achievable, typically with 100-200 percent elongation." Urethanes from Pathway Partners are often used.

Is it ready for prime time as a production material? "We're not up to their requirements for finished parts yet," says Titlow.

There's another way to skin the cat though. Titlow says it's possible to make molds for parts such as shoe soles from the Z process using the plaster-like materials. Then short-run prototypes can be shot in low-pressure equipment that simulates injection molding machinery. No one is in production on that type of process, but tests are underway at undisclosed locations.

"This is the real bleeding edge of where this type of technology is being used," says Titlow.

The key material for athletic shoe soles is thermoplastic polyurethane. There are several important product lines such as Estane (Lubrizol), Elastallon (BASF), and Desmopan, Texin and Utechllan (Bayer MaterialScience). Dow sold its TPU business to Lubrizol in January.

BASF has been partnering with Adidas to develop an improved cooling effect through use of fine-mesh ventilation panels. A special TPU insole performs like a fan, reducing heat generation by 20 percent while fine membranes allow any moisture build-up to escape.

Another trend for athletic footwear is the use of different TPUs in the same part, such as a shoe sole, through a co-molding or other assembly process. "Engineers now have more flexibility in design," says Tim Jacobs, NAFTA TPU market channel manger for Bayer MaterialScience. For example, there are new grades of Texin TPU that have a very high modulus that can be mated with soft grades. The stiffer material forms the structural backbone, while the softer material provides cushioning. Some of the co-molded parts even use micro sections that can be soft or hard, depending on the requirement.

"Engineers are also pushing the envelope to find material that is as soft and clear as possible," says Jacobs. A new Utechllan grade, for example, is transparent even in a 100 mm section used for testing.

None of the sources contacted by Design News; however, see development of a TPU for direct digital manufacturing on the near-term horizon.

However, considering the complexity of sole designs, relatively short product life and huge range of prototype tools required, it just may be coming some day.