Being competitive in the automotive testing industry requires test system technologies that are easy to configure and program, and that work with a broad range of sensor devices.

When the testing involves verifying the strength of an automotive component, often hydraulic actuators are involved. This applies a controlled amount of force repeatably on items such as automotive seats, seat anchors and seatbelts, either static or cyclical, as well as varying amplitude and frequency over time.

To control the hydraulics, a critical element of a flexible automotive test platform is a motion system that can be configured and calibrated easily via software for different testing applications. To interface with test operators and log test data, the motion system is typically teamed up with a PC. The test software on the PC is typically implemented using an off-the-shelf software development environment such as Visual Basic from Microsoft or LabVIEW from National Instruments. The PC downloads instructions to the motion controller, which in turn ensures that the test stresses are applied reliably and repeatably through precise closed-loop control of one or more physical hydraulic actuators. 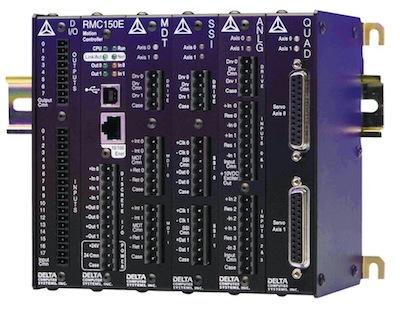 "Programmable motion controls are particularly important for durability testing," said Ian Sinclair, an engineer with Hydraulic & Motor Controls (H&MC), an experienced hydraulic test system integrator. "Static test systems can not respond to minute changes in the device under test that could signal an impending failure."

Additionally, because some tests require stresses from different directions to be applied simultaneously, the motion controller needs to be able to manage the forces applied by multiple axes simultaneously.

Selecting the motion controller
The motion controller that Sinclair uses is the RMC151E from Delta Computer Systems. The RMC (Figure 1) is a multi-axis controller that can control up to eight motion axes simultaneously. Each axis may move independently or any or all can be synchronized to move together using sequences of high-level motion commands. Programming and optimizing the motion is straightforward using Delta's RMCTools software suite. With a closed-loop cycle time of 1-2 milliseconds (or as quick as 0.25 milliseconds on 1-2 axis systems), the RMC is on the order of 10 times more responsive than the typical PLC, making it well-suited for use in testing applications that involve high-speed motion.