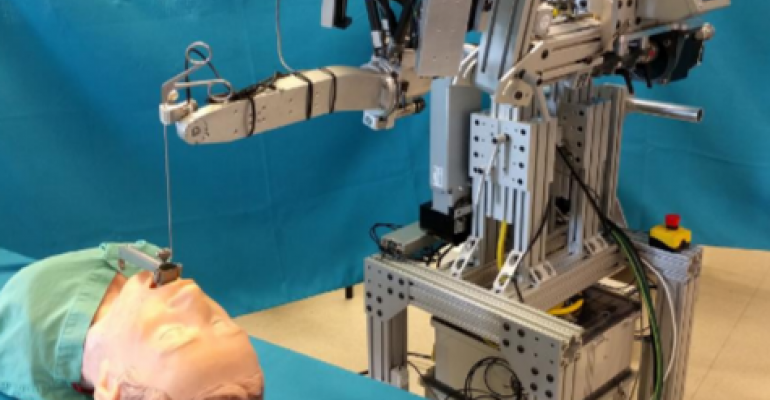 Autonomous mobile robots are getting deployed in unexpected settings, from hospitals and airports to warehouses and homes.

Companies are turning to robots to boost their workforce and their bottom line. Advances in speed, agility, efficiency, and productivity are helping to drive demand for collaborative mobile robotics. Mobility and autonomy of movement are making these robots useful in unusual settings. They have moved out of the traditional locked cages in automotive plants and are now roaming through warehouses, hospitals, and our living rooms.

We talked with Bruce W. Lichorowic, president and CEO of Galen Robotics, about how autonomous mobile robots are changing our concept of what a robot can do. Lichorowic will be a panelist on the session, Mobility: The Driving Force Behind the Growth in Collaborative Robotics, at the Advanced Design and Manufacturing Show in New York City on June 12.

Design News: How has robot mobility changed the overall usefulness of robots in the workforce?

Bruce Lichorowic: The first wave of industrial robots was mostly stationary and transformed many industries by providing consistent quality, super-human productivity, and attractive cost savings. However, lack of mobility options is a limiting factor for any worker, human or robot. Mobile robots create options that stationary robots can’t match. They can deliver medication, transport materials, vacuum, mop, explore the surface of a planet or the bottom of an ocean, and enter areas where no human could survive.

Consider this: There are toy kits for children, which give them access to the same types of sensors and robotics technologies that were once only found at DARPA [Defense Advanced Research Projects Agency]. Having such access is likely to be as transformative as the availability of the personal computer to people in the '80s. More people can learn, and master, these technologies—and at a younger age. That means more applications of technologies, doing things we still haven’t imagined.

DN: What are some of the settings you’re seeing for mobile robots?

Lichorowic: It’s hard to imagine a setting where robotics technology is not being applied, or where someone is trying to develop robotics for it, from the bottom of the ocean to the surface of other planets. We’re even seeing robots in our homes, airports, hospitals, nursing homes, and more.

DN: What trends are you seeing in autonomous mobility? Mapping software? Other forms of location sensing?

Lichorowic: No one solution is going to get us there. Humans have many senses—far more than the five we’re taught about in grade school. These senses work together so we can make sense of, and interact with, the world around us. Many, if not all, of the sensors available for robots to sense their place in the world around them have been around for quite a while. What’s new is the ability to integrate these sensors with each other and the computing resources (cloud and edge) to give them advanced capabilities at a cost that is sparking explosive growth in the industry.

DN: Mobile robots often work in the same setting as human workers. Is safety an issue?

Lichorowic: Imagine a robot designed to go down the corridor at a hospital to deliver medication to patients. Multiple people zip back-and-forth; some walk fast and some walk slow, and some stop all of a sudden. There may be other robots, IV racks, and other random obstacles, which may be stationary or mobile or even attached to another human being. Is it safe to steer in the middle of a hall with a human being on one side and an IV rack on the other side? Are you sure the human being and the IV rack are not attached?

In a hospital setting, many of the people with whom the robot interacts will never receive training to be around a robot. A robot must have all of the logic built in to carry out its job and avoid harming humans. Simply stopping isn’t necessarily the right solution, either, because it might have to deliver life-saving drugs to a patient in desperate need. Another person could’ve passed out on the floor in the shortest path, so the robot can’t simply stop and wait for the way to be cleared. It needs to decide if waiting is the right solution or if its current job is urgent enough that it needs to find a different way to its destination. Solutions for this will involve a complex combination of algorithm-based decisions and machine learning, which must be validated for safety.

DN: What kind of ROI are you seeing with mobile robots?

Lichorowic: ROI for mobile robotics is difficult to quantify in any general setting because their use is very setting-specific. Imagine an ecosystem of robots in an emergency room, providing triage support. The current level of technology for AI and human-interactive robotics could only handle very basic “cookie cutter” tasks. But what if that could improve ER throughput by 20%? What kind of impact would that have?

Patients would receive treatment more quickly, fewer people would be lingering in ER waiting rooms, and human practitioners could focus on the more complex cases. When you look at the scale of a single hospital, a hospital system, an entire country, or the world population, it’s easy to see how quickly small improvements can improve overall patient care and make it easier to keep up with the needs of a population of 8 billion people.

Lichorowic: Yes, with “extreme robotics.” A robot that can go to the bottom of the ocean or roll across the surface of Mars is replacing the opportunity for a human to do that. In eldercare, robots that can tirelessly monitor individuals, and aid them when needed, are replacing human caretakers. What happens when these robots are deployed, though? It usually creates new opportunities for humans, relieving them to focus on other, more complex tasks. Exploration robots require teams of people to build and support them.

A human caretaker can focus on more complex quality of life issues for elderly patients while a robot delivers pills. I think the next wave of robotics will create many opportunities for us. Some may choose to paint it as an apocalyptic, doomsday future, but robots are not unlike any of the other many technologies that have displaced humans.  The printing press replaced scribes. The car replaced rickshaws and litter-bearers. These examples also extended the reach of humanity and made things commonplace that were once considered inconceivable.