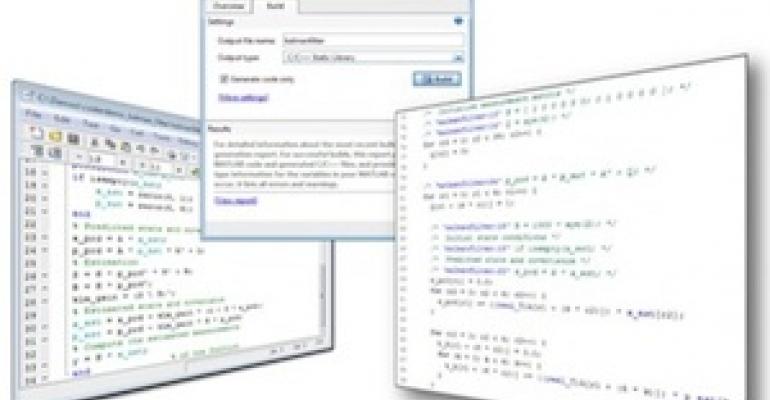 The MATLAB technical computing software is widely deployed in the concept development of electronic and communications systems, to create the algorithms at the core of these platforms. Eventually, however, the MATLAB algorithms need to be converted into C code for the prototyping stage and for integration into the final product-a step that has been a manual, highly iterative process and one that could take from days to weeks to perform, depending on the complexity of the program, according to Ken Karnofsky, senior strategist at MathWorks. With the introduction of MATLAB Coder, instead of manually converting the code and risk the possibility of introducing design errors and time-to-market delays, the code is automatically converted from MATLAB to C, greatly speeding up development tasks such as fixed-point design and prototyping, Karnofsky says.

"The difference with manual translation or recoding is that you have two versions of the program-one on MATLAB and another in C++," he explains. "As engineers make refinements, they can get out of sync with each other. In addition, iterations can be quite time consuming and expensive since problems are discovered later in the process when bugs are harder to fix."

MATLAB Coder will aid in tasks where translation is critical, including the creation of reusable libraries, real-time prototyping for creating a standalone executable, to accelerate algorithms to implement code for embedded processors. The tool supports MEX function generation for fixed-point and floating-point math in addition to an extensive set of MATLAB language features for algorithm development, including built-in matrix math operators and dynamic array handling.

In separate news, MathWorks announced that TUV SUD certified Simulink Design Verifier and Simulink Verification and Validation for use in ISO 26262 compliant development processes. The organization specializes in independent assessments and certifications and this latest one will help automotive engineers developing high-integrity embedded systems establish the required confidence in the proper functioning of these verification tools according to their use cases.