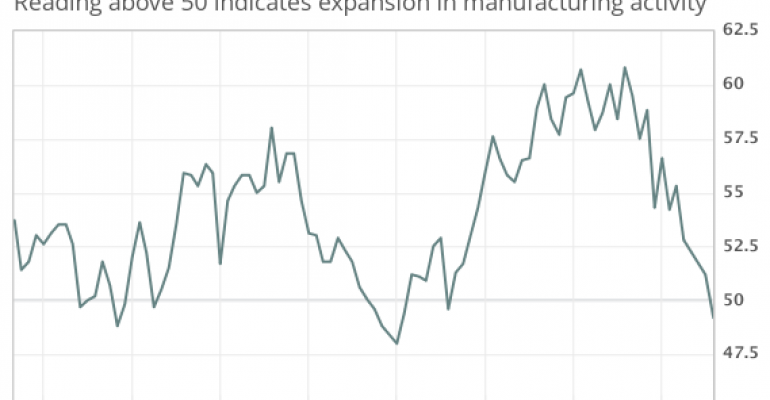 We’re two months into a US manufacturing contraction. What will that mean for smart manufacturing investments and jobs? BDO’s Eskander Yavar takes on these questions.

According to the Institute for Supply Management, manufacturing in the US has been contracting for two months. That’s the first time since 2009. An ISM number below 50% constitutes a contraction in manufacturing. In August we saw 49.5%, in September, 47.8%. The reports are fanning fears of recession, and most analysts point to tariffs as the problem.

What does this contraction mean for the mid-market manufacturers who have been adding advanced manufacturing tools over the last few years? We caught up with Eskander Yavar, the national leader of BDO’s Manufacturing & Distribution practice. He explains how the downturn in manufacturing will affect manufacturers as they toward Industry 4.0.

Design News: Can you explain what you’re seeing in the US manufacturing sector now?

Eskander Yavar: It’s clear every day that the contraction is upon us. It started with the tariffs on China, and now the trade conflicts have become broader. We’re seeing many different sectors of manufacturing getting affected. The tariffs are the primary driver on the lower volume of goods and volume of output. There is the combination of tariffs and the value of the dollar that is affecting manufacturers, but the tariffs of the last two years are driving the contraction. I think we’ll be in this situation for the next 12 or 18 months. We’re probably going to see positive new advances regarding trade because of the election, but it will be 12 to 18 months before we see positive results in output.

Eskander Yavar: Those with a direct involvement in raw materials such as steel and aluminum, or those in agriculture were the first to get hit. I talked with a supply chain expert in oil and gas, and they’re affected too as oil prices moderate. They’re feeling the pain right now. Oil field services are also getting affected. There is spillover is hitting automotive in tiers one, two, and three. A lot of the pain is tied to the actual sectors involved in the trade tariffs.

Design News: How are mid-market manufacturers responding to the trade turbulence?

Eskander Yavar: We’re seeing capital asset expenditures going down. Industry 4.0 investments are going down. Yet that could change with the demeaner of the administration. In the meantime, consumer spending is still high. Manufacturing is a leading indicator for the health of our economy, so a downturn could follow a manufacturing contraction. The middle market manufacturers are getting more conservative. They’re getting ready to hold back. Job losses in manufacturing may hit 400,000 by the end of the year. You’ll see conservative fiscal policy with the CFOs who want to wait and see instead of investing in equipment.

Design News: If the contraction leads to a recession, what would that mean for manufacturing jobs?

Eskander Yavar: I’m still seeing a tight labor market in manufacturing. One of the concerns is that in the last recession, there were a lot of workers who dropped out of the job market and retired or moved to Uber. They left the manufacturing job market. That’s part of the contraction. That will probably be a continuing trend. People will find alternative means of living, so we could see a net loss in the job population in manufacturing when it rebounds in the future.

Design News: How will the slowdown impact manufacturers’ Industry 4.0 investments?

Eskander Yavar: The factory of the future is new to mid-market manufacturers. It’s going to take a hit. We just released our annual survey on the effect of Industry 4.0 on mid-market manufacturers – that’s companies with $250,000 million to four billion in annual sales. That audience has been adopting robotics on the shop floor, as well as IoT and predictive maintenance. The contraction will put the brakes on some of the investment at these companies as they become cash strapped. Capital outlays will be monitored closely. We’ll see the brakes put on Industry 4.0 investments.