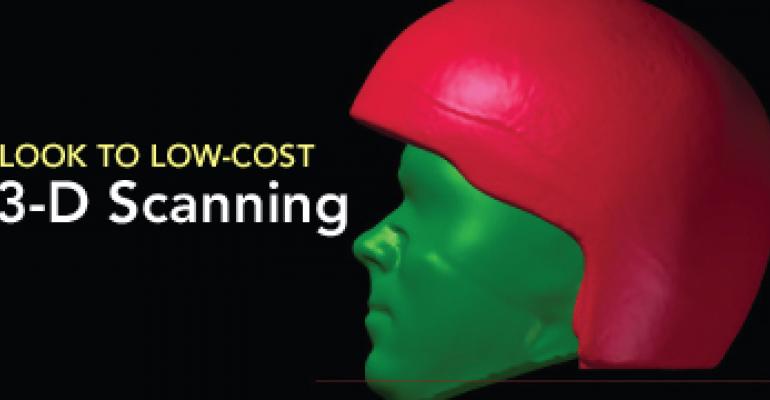 In a matter of hours, engineers at John Force Racing can build a perfect race helmet liner. They can measure a driver's head, upload the measurements into a computer-aided manufacturing system and machine a foam liner that fits inside the helmet, conforming to every nook and cranny of the driver's skull. The process is worth it, they say, because it may one day save the lives of race car drivers.

For engineers - especially those laboring in small- to medium-sized companies where design and manufacturing budgets are tight - the prospect of affordably creating such complex and vital products borders on the unbelievable. But thanks to a new breed of three-dimensional scanning technologies, race helmet liners and other products with unusual or organic shapes can now go from art to part in a matter of hours, experts say.

"Right now, scanning is one of the fastest-emerging engineering fields," says Ed Tackett, director of RapidTech at Saddleback College in California, a National Science Foundation Center for Rapid Technologies. "With the proliferation of microcontrollers, people are finding new and better ways to do scanning."

Indeed, John Force Racing is only one of a growing number of companies taking advantage of such new laser scanning technologies. NextEngine, a maker of low-priced 3-D scanners, says it worked with manufacturers to create ear molds for hearing aids and orthotics for running shoes. It has also helped to make better prosthetic devices for amputees and improved orthodontic braces for kids.

"The idea is to quickly, affordably and accurately capture organic shapes, or highly non-prismatic shapes, which would be very difficult to measure with calipers," says Dan Gustafson, marketing director for NextEngine. "If you can capture it and take it into CAD, then you can begin to do things with it."

From Art to Part

John Force Racing moved to helmet liners after the death of racer Eric Medlen, who was fatally injured when his head struck a roll bar in a "Funny Car" in 2007. Looking for innovative ways to boost safety, the company began making the foam liners as a means of cushioning the potential blows to the head that can occur when a vehicle crashes or when it violently shakes the driver.

Making custom liners affordable, however, was no simple task. To inexpensively capture the shape of a drivers' head, digitize it and transport its digital data to a machining center is a chore that can range from difficult to financially impossible. Many of today's commercially available 3-D scanners can cost upwards of $80,000.

"To do what we are doing would normally require a $100,000 scanner," says James Gregg, programmer and designer for John Force Racing.

Gregg says; however, that the John Force team has been able to create helmet liners by employing a desktop scanner from NextEngine that cost less than $3,000. NextEngine, which has filed for approximately 25 patents on its technology, uses four lasers that sweep across the object, cross-referencing each other while they gather data.

"We do it by using inexpensive components configured in an innovative way," Gustafson says. "The idea is to make it affordable and keep it in a small package."

John Force's engineering team adds their own innovative ingredient to NextEngine's recipe, bolting the cereal-box-sized scanner to a door frame and then scanning the heads of drivers who sit on a chiropractic bed underneath it. Creating good, usable data, Gregg says, takes anywhere from seven to nine "data capture" sessions.

"The drivers wear a swim cap with 'x's all over it to help us re-orient after each scan," Gregg says. "They put the cap on and we scan the head. We re-orient, then scan again and again."

Trillions of data points gleaned from the scans are stored in "stl," a file format used in stereolithography CAD files. Those scan results are then exported to an IGES (International Graphics Exchange Specification) format, and finally transferred to a Mastercam file for use by a machining center that creates the curves and contours in the foam liners. John Force Racing uses a Fadal VMC 6030 five-axis machining center to make the 1.25-inch-thick shell out of a 1 x 1 x 1 ft billet of soft, high-tech foam. In all, Gregg says, the process takes about 12 hours.

"We're going to do this on an ongoing basis with all of our race car drivers," Gregg says. "We're making sure that every one of them is as safe as possible."

NextEngine's technology is also spreading to other areas of design. Vorum Research Corp., a leading prosthesis software manufacturer, is integrating NextEngine connectivity into its Canfit software. And Delcam, a supplier of advanced CAD/CAM software, has entered into a partnership with NextEngine that will involve its ArtCAM Pro software.

Tackett of Saddleback College purchased 20 of the NextEngine desktop scanners for a class in which students will be taught how to reverse engineer common products using laser scanners. His lab has also used the scanners to do digital archiving of aircraft tooling, to create a digital library of the ancient archeological artifacts, and to make a digital model of an entire motorcycle.

To be sure, NextEngine isn't the only entrant in the area of inexpensive 3-D scanning. Do-it-yourself 3-D scanning technology is developing its own niche on the Internet, with numerous websites explaining how to build your own 3-D laser scanner. A simple Google search of "DIY laser scanning" yields thousands of hits, with multiple YouTube videos demonstrating how do-it-yourselfers can build their own scanners. Moreover, makers of scanning kits are said to be increasingly showing up at trade shows frequented by design engineers.

"You can build a 3-D scanner for under $100 if you're so inclined and if you're mechanically apt," Tackett says. "Right now, the kits don't have the resolution of a NextEngine scanner. But we're starting to see kits with better lasers and better scanners in them, and we expect that to continue."

In the end, the key to success for such technologies may be the ability to quickly and easily transport digitized scan data into CAD software, such as SolidWorks or Pro/ENGINEER. High-end commercial scanners offer that ability today, and so does NextEngine. To the extent that such abilities move to the lower end of the cost spectrum, experts expect inexpensive 3-D scanning to gain popularity in the engineering community.

"The faster you can turn a product around and get it out the door, the more you can be globally competitive," Tackett says. "This kind of equipment helps you do that."