HomeAutomationIt’s Curtains for Baxter and Sawyer
Recent
Automation
Novel 3D Printing Method Used to Replenish Coral Reefs
May 16, 2022
Volkswagen’s Electric Successor to the International Scout 4x4
May 16, 2022
The Music Is Over For Apple's iPod
May 16, 2022
Q&A With IndyCar Gearbox Expert Anna Chatten
May 13, 2022
POLL
Intel Unveils Trust Authority to Boost Security
May 13, 2022
Supplier News Looks at Highly Customizable Industrial Monitors
May 12, 2022
Here Technologies Maps are Key to Mercedes Level 3 Automation
May 12, 2022
'We Built the Domino's Pizza Tracker for Manufacturing'
May 12, 2022

It’s Curtains for Baxter and Sawyer 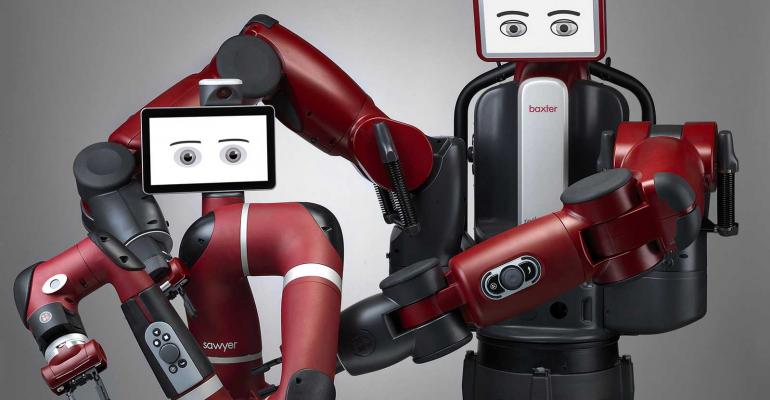 Rethink Robotics closed its doors on Wednesday, bringing to an end one of the first players in the burgeoning cobot market.

The Boston Globe on Thursday broke the news that Rethink Robotics closed its doors on Wednesday afternoon. The company’s CEO, Scott Eckert, told the Globe that a buyer recently backed out of a potential sale. He declined to name the potential buyer. Eckert noted that the company was low on cash because the sale from the collaborative robots (cobots), Baxter and Sawyer, fell short of expectations.

If the new wave of smaller robots, which captured the attention of the robotics market in the last few years, had a face, it was certainly Baxter’s cartoonish eyes. The cute red cobot was ubiquitous at industry trade shows, where the Rethink sales team members eagerly showed attendees how easy it was to teach the machine tasks. The company had star power from the beginning. Rethink Robotics was founded in 2008 by Rodney Brooks, a professor at MIT who also co-founded iRobot, the maker of robotic floor cleaners like Roomba.

Rethink was a leader in the development of small, human-friendly robots that became known as cobots. Yet over the last few years, companies such as Universal Robots, ABB, and KUKA have entered the small robot market aggressively. So, the demise of Rethink is not likely a reflection on the viability of the cobot market. Many in the robot industry believe that Rethink couldn’t keep up with its faster and more agile counterparts.

The Market Sped Past Rethink

Rethink’s difficulties might be summed up by the experience of the distributor, Numatic Engineering. It represented Rethink in Southern California from 2013 to 2014, but was unable to find industrial applications that Baxter or Sawyer could handle. The distributor invested resources in training its staff and doing sales outreach, and customers were initially very excited. Yet it turned out that Baxter did not have the speed, accuracy, or ease-of-use required for the market.

“We spent a year and a lot of hard work trying to sell Rethink Robotics. We were looking for that next new product. As a distributor, you’re always looking for the next new thing,” Steve Leach, president of Numatic Engineering, told Design News. “Rethink had all the buzz. They were on TV, and they had Rodney Brooks. We had open houses and took it to a lot of customers. It was a door opener that everyone wanted to see.” Yet that didn’t result in sales. Numatic wasn’t able to sell any units.

Taking the Customer to the Next Step

Leach questioned whether Rethink’s top engineers actually understood the needs of the manufacturers—the target audience for Baxter and Sawyer. “Ultimately, Rethink didn’t understand the market they were trying to sell to. They had a bunch of young engineers who were smart, but they didn’t know the expectations and true needs of the industrial market,” said Leach. “You have to be able to take customers to the next step and they couldn’t do it. Universal Robots was miles ahead in the development of their firmware and hardware. They had the technology.” Since dropping Rethink in 2014 for Universal Robots, Numatic has sold close to 300 robots and remains enthusiastic about cobot technology.

According to the Globe, Rethink received $150 million in venture funding including investments from GE Ventures, Highland Capital Partners, and Bezos Expeditions, the investment company of Amazon.com founder Jeff Bezos. Eckert told the Globe that Rethink will sell off its patent portfolio and other intellectual property. He noted that the company’s 91 employees expect to be in strong demand from other robotics firms. He also explained that the failure of Rethink is no reflection on the overall health of the robotics industry.