It Takes a Village to Automate a Plant 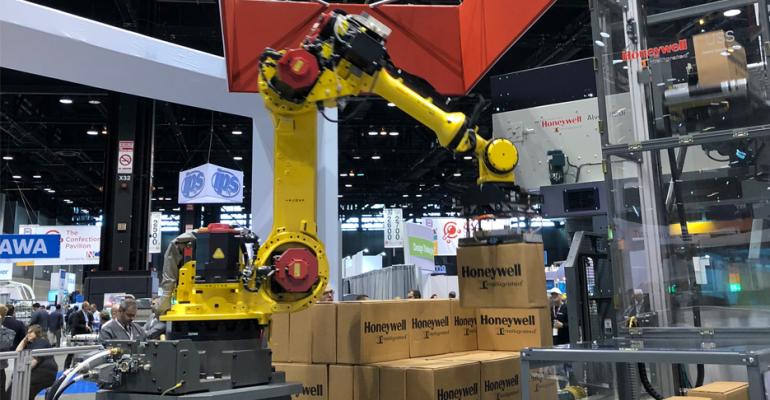 Honeywell is delivering turnkey solutions to its customers that include a range of robotics, vision systems, machine learning, voice technologies, and augmented reality.

Rather than selling equipment to its plant and warehouse customers, Honeywell Intelligrated is creating solutions that include a range of technologies. As the name Intelligrated implies, Honeywell is acting like an integrator, by providing a range of equipment and software to solve warehouse, plant, and packaging solutions from concept to operation.

“We’re expanding our smart robotic offerings to provide end-to-end solutions to make work cells more efficient,” Joseph Lui, VP and general manager of robotics, computer vision and AI at Honeywell Intelligrated, told Design News at PackExpo 2019. “We can be a single source for autonomation for our customers. That’s automation with a human touch.”

Lui noted that the use of technology – including voice-guided solutions for workers to increase picking efficiencies and automated mobile robots for transporting items quickly – is just the start of the digital transformation of warehouse and manufacturing operations. “The next 10 years will see a revolution in how these centers work and operate,” said Lui.

Partnering to Build a Collection of Technologies

To accomplish this, Honeywell has brought together the expertise from a range of companies and equipment providers, including software vendors, universities, startups, and incubators. “In the digital technology space, we’re connecting warehouse operations to increase efficiencies by employing advanced solutions that include machine vision, smart robotics, augmented reality, and voice technologies,” said Lui.

As part of the buildout for creating solutions, Honeywell has partnered with Fetch Robotics to provide autonomous mobile robots for effectively fulfilling orders. The robots operate safely alongside human workers to transport items through distribution centers without human guidance or fixed paths. Honeywell is also utilizing a number of other robot companies. “In additional to Fetch, Honeywell has created strategic partnerships and investments in Soft Robotics and Attabotics,” said Lui.

In order to blend these technologies into solutions, Honeywell has created space where all the technologies can be integrated. “We’ve taken these investments, and established a robotics center of excellence,” said Lui.

Curating a Collection of Technologies

The investments to build out Honeywell’s logistics and packaging solutions reach beyond robotics and into advances that are still in world of academics and start-ups. “We’re investing in partnerships with software vendors, universities, startups, and incubators to create new solutions for both simple and complex needs,” said Lui.

In order to reach some of the bleeding edge technology, Honeywell has engaged Carnegie Mellon University. “Our collaboration with AI researchers at Carnegie Mellon University’s National Robotics Engineering Center is helping to develop breakthrough technologies for distribution centers,” said Lui. “The focus is on building architecture relying on artificial intelligence and advanced robotic systems for advanced supply chain demands.”

To support the packaged solutions, Honeywell has created platform that enables the technology elements. “Part of the collaboration comes from the Honeywell Universal Robotics Controller (HURC). This is a high-performance platform for vision, planning, and motion,” said Lui. “The HURC leverages the machine learning and robotic control software to provide the processing power to handle volumes of real-time data for faster perception and more effective action. The HURC uses a virtual environment for simulation, testing, and troubleshooting to drive rapid solution deployment.”