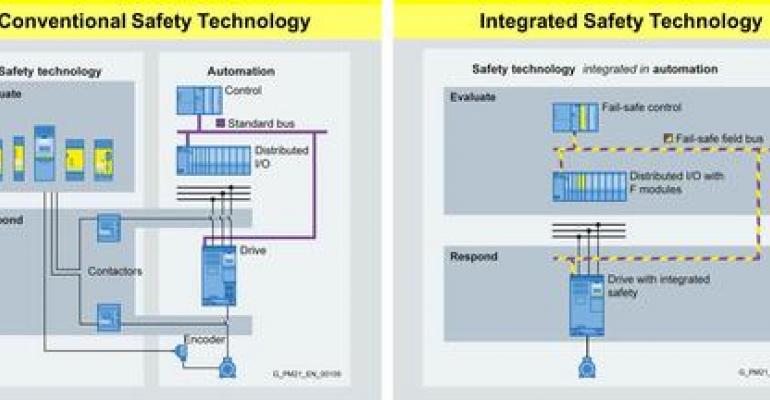 There’s no question plant safety has always been a prime concern, but now it takes precedence from the shop floor up to the C-suite. Plant managers are tracking days-without-accidents while introducing improve safety procedures and deploying advanced safety technology. The reason? Safety delivers efficiency, and efficiency lowers cost.

The profile of plant safety has risen in recent years. Manufacturing executives are well aware that safety infractions can be costly to the company’s reputation. Plus, a safe plant is a plant with fewer interruptions.

“Every plant wants you to wear safety gear – shoes, high-visibility vests, safety glasses. They have increased lockouts and tagouts,” Erl Campbell, industry sector manager for food and beverage at Aventics, told Design News. “Injuries play a big role,” Campbell said, but added, “There is also a cost aspect because safety keeps costs down.”

The greater emphasis on safety has prompted plant managers to track the spans of time without accidents. “They’re really focusing on it,” Campbell said. “They list their number of days without incidents, and they’re demanding more from the machine builders to make their equipment safe.”

MORE FROM DESIGN NEWS: How Do International Machine Safety Rules Apply to the US?

As well as pressure on machine builders to safety-proof their equipment, there is greater education within plants. “The average safety IQ has gone up dramatically across the board, which is a very good thing for reducing injuries, as well as increasing that bottom-line profit,” Matthew M. Miller, FS Engineer for ABB-Jokab Safety, told Design News. “With education you get more people being proactive about safety, whether it’s designing safety into a new machine or evaluating an old machine… before an incident occurs.”

Miller also sees that safety has become an across-the-board and executive concern. “The most significant trend in safety is the involvement of all stakeholders and the commitment to place safety first,” he said. “From CFO, to maintenance engineer, to custodian, the awareness has never been higher, and the companies that understand and implement this are going to be your leaders.”

Why Has Safety Become Integrated?

When it was first proposed that safety run on the machine control cable, the industry balked. Yet the automation vendors held their ground, insisting integrated safety was truly safety than two hardwired networks, one for control and separate wires for safety.

“The safety circuit used to have its own set of logic around the machine and equipment. The movement of integrated safety is bringing safety right into the devices and equipment,” Craig Nelson, product marketing manager at Siemens Industry US, told Design News. “Everything is on the same system now. It becomes a lot more economical, with more safety, more diagnostics, increased productivity, more functionality. We couldn’t do that the traditional way.”

Integrated safety didn’t begin all at once. It was a function here and there until the entire safety network stated to share the same Ethernet cable as control. “It’s taken off in the last five years. It started with a basic safety function or two in the ’90s. The trend took off fast in Europe, with the US following a little behind,” Nelson said. “The PLCs and the safety I/Os are all integrated now. The floodgates are open, and we’re now moving to global standards with IEC 62061 and ISO 13849. The globalizing standards are allowing OEMs to avoid having different iterations of their machines.”

While the safety signals run along the same Ethernet cable as control, the signals are not integrated into control. They follow their own logic and their own protocol. “Safety is becoming integrated more thoroughly into the control architecture of machines. Yet integrated safety is really only integrated into itself,” Derrick Stacey, solutions engineer at B&R Industrial Automation Corp., told Design News. “There is a safePLC that sits on a special safe network which communicates to specialty-designed safe I/O modules that run in parallel to a standard PLC, communicating on a separate fieldbus to the standard I/O modules.”

So while the safety on multiple machines is integrated, it runs parallel-but-separate to the control. “If you are doing motion control, which most machines are doing these days, there is an additional safe motion controller that needs to run in parallel to the standard motion controllers,” Stacey said. “The word ‘integrated’ isn’t really appropriate when you consider that these safe products need to run separately from the standard machine control components that run the processes of the machine.”

Ethernet cables were the breakthrough that improved plant networking. Ethernet solved the problem of running separate hard wires for control and safety, which was an ongoing problem.

“There’s a big advantage to moving away from hardwired safety. A lot of wires make it difficult to diagnose and troubleshoot, and there is no protection against people affecting the safety,” Nelson said. “The traditional system based on wiring lent itself to manipulation. You had all these safety circuits, and if people needed to do other functions, they’d have to get through the safety wires, which often defeated the safety system. They wouldn’t put back the safety wires back way they should have been.”

MORE FROM DESIGN NEWS: Do You Know How to Engineer, Modify, and Use Emergency Preparedness Systems?

Going forward, true integration of control and safety may begin to take place. “The obvious next step was to incorporate the integrated safety devices into a truly integrated network and machine control architecture,” Stacey said.

B&R Industrial Automation says it has taken this next step by building a fieldbus – Powerlink – based Ethernet hub into the SL line of safe CPUs that allows these products to sit anywhere on the machine network and is useful in any network configuration, which could be star, tree, ring, and so forth.

The High Cost of Non-Safety

Overall, safety has become an investment with a clear payback in ROI. The benefits run along the manufacturing chain, from machine builders, to plants, to even customers, who benefit from greater plant flexibility.

“Truly integrating safety into the controls system can benefit not just the flexibility of the system, it can also have a positive effect on other parts of the machine building process that can save OEMs and end-users time and money,” Stacey said.