HomeAutomationInstrumentation Operates at 210C
Recent
Automation
Q&A With IndyCar Gearbox Expert Anna Chatten
May 13, 2022
Intel Unveils Trust Authority to Boost Security
May 13, 2022
Supplier News Looks at Highly Customizable Industrial Monitors
May 12, 2022
Here Technologies Maps are Key to Mercedes Level 3 Automation
May 12, 2022
POLL
'We Built the Domino's Pizza Tracker for Manufacturing'
May 12, 2022
Break Your Bubble Gum Habit by Watching Its Production
May 12, 2022
This Patch Monitors All Your Vitals, Including Blood Pressure
May 12, 2022
First E-Skin to Anticipate, Perceive Touch from All Directions
May 12, 2022 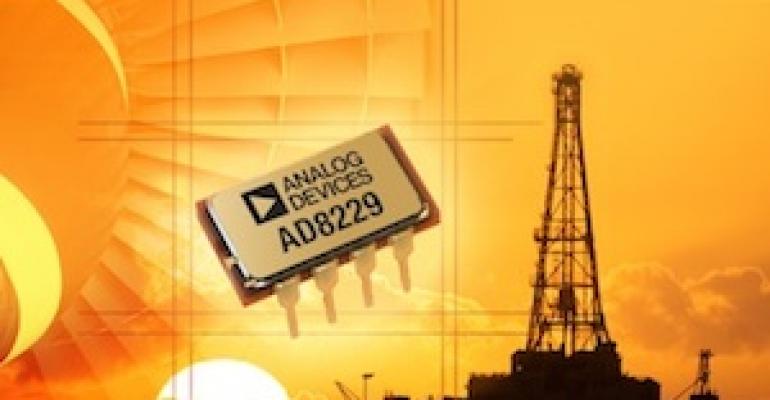 Guaranteed to 210C, the AD8229 from Analog Devices is being touted the first instrumentation amplifier designed and manufactured for hot, harsh and hostile environments. This 1.0-nV/vHz low-noise device is specifically targeting extreme, hostile environments such as down-hole oil drilling, jet engines and space exploration.

"The AD8229 is truly a breakthrough product for the oil exploration industry," says Jun Liu, General Manager of Qingdao Zitn Micro-electronics Co. Ltd. "It is not a retrofit of existing components. It was designed from the start for high-temperature environments. What this means to Zitn is that we will be able to operate our equipment longer with less repair time resulting in significant savings."

In the past, designers have been forced to meet the challenges of rugged, noisy high-temperature environments with components not specifically designed for high-temperature conditions or were designed to operate at lower commercial grade temperatures. The AD8229 is unique because it solves some of the most difficult problems faced by engineers designing electronics for extreme hot, harsh and hostile environments to greatly improve maintenance and operation lifecycle.

"The trends we are seeing in the oil and gas industry is that, when exploring for new sources of energy, companies are often forced to do it in more difficult environments," says Pam Aparo, Segment Marketing Manager for Analog Devices' Instrumentation Business. "Companies are forced to drill deeper or at a more horizontal angle which reduces how efficiently they can cool the drilling apparatus. That's driving the need for components to do measurements at higher temperatures than ever before."

One challenge is that the control electronics are housed in close proximity to the point of impact. At the bottom of the well or the end of the drill tunnel, classes of drilling such as wireline drilling and logging while drilling (LWD) or measurement while drilling require high temperature electronics.

What these applications have in common is exposing the electronics to high pressure, high temperature (HPHT). Working several miles underground, fixing and re-inserting the drills is a huge problem, and estimates put the total cost for this type of maintenance operations at millions of dollars per day in the case of a failure. It's not possible to totally control the systems but goal of the electronics is to stay operational in these harsh environments.

"Temperature is a major challenge, along with the type of signals and demanding work done so far underground," says David Chan, marketing manager for Analog Devices. "Our systems are very low noise and we're been able to squeeze it down to the point where you can actually detect conditions that even on the surface at room temperature would be difficult to deal with."

This includes gamma ray detection and NMR which is the oil drilling version of an MRI where the requirement is to fit that level of instrumentation and sensitivity into a tube 12 inches in diameter. The challenges are quite extreme, not just the high temperature but also the noise performance that goes along with it.

"Sitting five to ten feet from the drill head means that the control and instrumentation electronics are subjected to a huge amount of mechanical stress and vibrations in the structure itself. Fluids are flowing back and forth to provide cooling or lubrication during the drilling operation. Plus the application is measuring the radioactivity of the formation around the unit, so there are many noise sources that need to be screened out," Chan says.

As far as the challenges on the component level, previously when drills only went up to 175C, existing silicon that was military rated could be stretched and used in the application. The goal would be to see if the performance held up, characterize the stresses and subject the system to extensive testing.

"Going from 175 to 210C is much harder because fewer components are available to handle the higher temperatures," says Aparo. "This is one of the first components designed specifically for that elevated temperature range. We used an SOI process and one of our ADI fellows with over 30 years of experience was a part of our design team."

The resulting AD8229 amplifier is best-in-class in all three performance categories for high-temperature applications including CMRR (common mode rejection ratio), voltage offset and input noise. CMRR performance is 100 dB over the temperature range of 55 to 210C. The AD8229 input voltage offset varies by only 100-nV/C over the entire temperate range. Input noise is 1.0-nV/vHz making the amp ideal for sensors that read faint signals such as those used in down-hole drilling, nuclear magnetic resonance spectroscopy and gamma ray detection.

Click here to watch ADI Fellow Moshe Gerstenhaber explain how the AD8229 meets the design challenges of high-temperature environments.
0 comments
Hide comments
Related
You Might Like