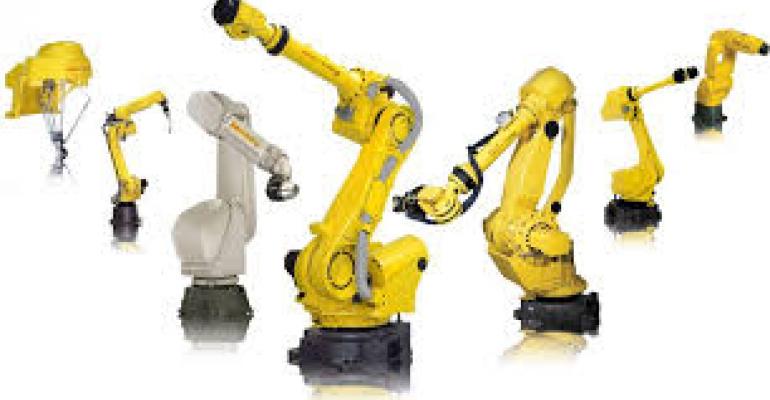 Advances in software development techniques and networking technologies have made the installing and assembling of robots faster and less costly.

Robotics has progressed from a world of building blocks and moved to real-world computing. Robots are getting progressively integrated into several types of production lines, which is driving industrial robotics market growth. According to Grand View Research, the industrial robotics market is expected to reach $41.20 billion by 2025. The rising awareness of the benefits of industrial robots—which include cost effectiveness, quality assurance, optimized production efficiency, and safe working conditions in hazardous environments—offers positive opportunities for market growth.

Artificial intelligence (AI) and machine learning (ML) capabilities have gradually made their way into industrial robotics technology, leading to the adoption of collaborative robots or co-bots in various application areas. Co-bots enable direct interaction with a human within a defined collaborative workspace. Co-bots have opened up a huge number of possibilities for task automation. Yet these can go unfulfilled if the robotic system is not easy to program or is not affordable or flexible enough. The flexibility of Universal Robots' (UR) system has led to UR robots being deployed in a wide range of application areas. Some of them are listed below:

The combination of AI, ML, and robotics is the recipe for success, according to Fanuc Corp. The company is engaged in converting robots, which are focused on doing a single function of thinking and working according to a need and situation, by integrating thinking abilities into the robots. In October 2016, Fanuc collaborated with NVIDIA to implement AI on the FANUC Intelligent Edge Link and Drive (FIELD) system. That system is intended to foster robotics productivity and bring new capabilities to automated factories globally. FANUC uses a variety of NVIDIA GPUs and deep learning software to enable AI in the cloud for robotic training.

According to Kiyonori Inaba, general manager of Fanuc, “Advances in artificial intelligence have allowed robots to learn, watch, and expand their capabilities. Deep learning has also cut down time-intensive robot behavior programming.”

Additionally, robotics technology has significantly captured the healthcare industry, assisting in dental care, surgeries, research & development, and diagnosing medical problems. For instance, hospitals in San Francisco are using robots called Tugs that deliver food and drugs to the patient as well as pick up waste and laundry.

In Canada, robots are used in hospitals to help children cope with trips to the doctor’s office. The research at Alberta Health Services and the University of Calgary also predicted that the robots may be given new features, such as facial recognition, which can make interactions with patients more personal. In Japan, a robotic medical device called Hybrid Assistive Limb (HAL) is steadily deployed across hospitals in Japan for aiding those with diseases such as amyotrophic lateral sclerosis (ALS) and spinal muscular atrophy.

Robotics technology is also gradually capturing significant share in the mining industry, owing to rising safety concerns and the need to automate the mining site. Robotic devices powered with AI can perform a wide range of mining operations, ore sampling, and the rescue of trapped miners. Robotic assistants are deployed at mining sites to analyze the quality of ore samples. They also contribute physical strength and precision.

Furthermore, the adoption of Robotics Process Automation (RPA) provides many benefits in the legal industry. The end-to-end streamlining of existing and new processes and workflows is very attractive to legal service provides, as they have been trying to accomplish it over a long period of time. Moreover, RPA adoption caters to greater effectiveness and productivity, which is expected to transform the quality of legal services on a global scale.

With the growing demand for cloud-based storage, the RaaS solution is maintaining an upfront position in the industrial robotics market. The deployment of robots—maintaining and integrating them with multiple databases across the industry vertical—is challenging in terms of effort and budget. This constraint can be addressed by a new business model where the robots are obtainable as a service rather than as a product. The advantages of deploying the RaaS business model are as follows:

Cloud robotics is a new approach in which robots share data and perform computation via networks built on a cloud computing platform. Once connected to the cloud, robots can gain advantage from powerful storage, computation, and communication resources of the modern data center in the cloud, which can share and process information from various machines. Moreover, the adoption of cloud robotics is increasing to augment the capabilities of industrial and service robots.

The Case for Industrial Robots

Robotics is opening a new era in not only quicker production runs, but also in manufacturing customized products that are impossible to produce through traditional methods. Robotics is ushering in a new age of product customization for manufacturers to carry out faster set-up times and meet the mandate of customization and apply these capabilities to continually shrinking product life cycles. Manufacturers are under pressure to highly automate and also recognize the importance of adopting flexible industrial robotics to stay competitive in the marketplace.

Lastly, there are numerous benefits of robotics including plug and play capabilities, speedy ROI rates, and ease of training. Yet the adopters need to ask themselves questions like: How ready are they to incorporate the technology into their operations? And to what extent do their operations have modern automated systems in place? Moreover, the adopters need to be agile and swift in acquiring robotics solutions to remain competitive. They also must be careful in deciding what needs should be automated and what technology needs to be adopted to carry out the selected automation tasks.