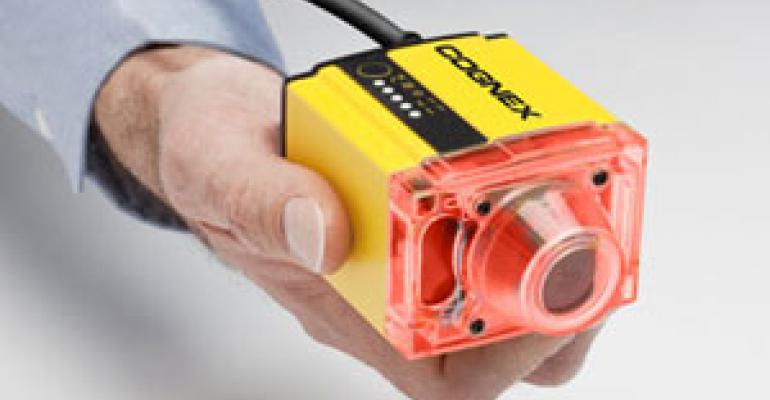 "From an innovation standpoint, what we wanted to do for image-based 1D barcode reading is set a new standard from a read rate perspective," says John Keating, manager of product marketing at Cognex Corp. "As we set the stage to go after the mid-range logistics market typically served by omnidirectional laser scanners, there were no image based products because of the technology barriers."

The technological innovation behind the DataMan 500 product is the ability to read full frame images and demonstrate 90 frames/sec reads without requiring an external sensor to trigger the reader. It is also the first incarnation of VSoC which marries new technologies for image acquisition and processing with company's IDMax software.

One current trend from a demand and throughput perspective is that read rates and the expectation of higher read rates are increasing. Many customers using laser technology have been accepting low to mid-90 percent read rates. Often in the industry, 96 percent is viewed as good performance when read rates of 99 percent plus can be seen as an achievable goal with image-based reading.

With the drive to higher throughput, any time there is a "no read" condition, product is stacking up and impact operations. These drivers are pushing suppliers to innovate, and to determine how to get image-based technology able to achieve a price point where users can replace low cost lasers. A second challenge is that image-based readers have historically been up against a technology barrier where a CCD or CMOS sensor transfers an image to a DSP, but it is difficult to effectively process the image.

Even with the most cost effective cameras that operate at 30-60 frames per sec, cost effective DSPs can't crunch through that data fast enough to do omnidirectional reading at the highest conveyor rates. It has limited use of image-based readers unless customers moved to more costly line scan technology.

Cognex has spent a number of years developing the VSoC technology to break through these barriers. The system is able to take pictures fast enough to keep up with conveyors going at 400 ft/min. But it can also perform dynamic light variation on-the-fly, so that as a bright or dark object goes through the view, the internal illumination can change fast enough at 1,000 fps to get a good picture and to be able to find the bar codes right on the silicon.

"VSoC technology is the key development because we designed the silicon from scratch and created a vision imager versus taking off-the-shelf products and using them for machine vision," says Keating. "It was also implemented to support onboard programming, so that as the unit is reading, processing can be done on the chip."

"One of the hardest things to do with bar coding is first to find the code in the field of view. Being able to do that on the chip makes the DSP's job much easier because it receives a small picture with an image of a bar code area to interpret," he adds.

Now applications can achieve really high rates of speed with image based readers, and be effectively used for high speed lines. But it turns out that some of the best reactions to the product have been in "presentation reading" situations where there is a need to pass an object by the scanner and have the system read the code reliably without reading it multiple times. The DataMan 500 has that ability because it reads fast enough to know if the bar code has left its zone.

"When it comes to throughput requirements, the faster you can process codes, the faster the product will move out the door," says Keating. "The read rate of the DataMan 500 has created a positive reaction in the market but it is the read rate at the higher speeds that is unprecedented."

Another important trend for bar code readers is the ability to add a 2D code for tracking and traceability which creates a way to future proof the product and to migrate from 1D to 2D safely in the future. The DataMan 500 provides a solution because of its ability to do both 1D and 2D reading because it is an image-based reader.

On the second or third shift, there might be an issue on the line but personnel would need to call someone in to find out what was going on. On a no-read, being able to archive the image and send the image to another location provides an ability for someone remotely to look at the image and find out that there was, for example, no label or the label was folded over. Being able to archive and understand better what is going on. The challenge of improving a 95 percent read rate is not only to read more difficult to read codes, but also to understand the read failures. But, often customers have no idea what is causing the reduced read rate. They are unable to quantify why the laser didn't read the code properly because they can't figure out what it saw.

Using IDMax code reading software, DataMan 500 achieves higher read rates by reading the 1D barcodes that laser readers cannot read including damaged, distorted, blurred, scratched, low height and low contrast codes. It processes images at up to 1,000 frames per second and can read codes in any orientation, 2D codes such as Data Matrix and QR and multiple codes in the same image.
0 comments
Hide comments
Related
You Might Like