Hydrails are the future of rail transportation 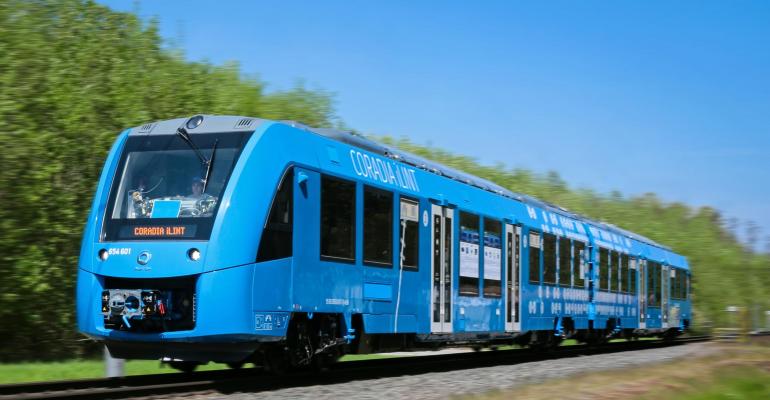 Hydrails, hydrogen-fueled locomotives and railcars, could be the alternative to a prohibitively expensive electrified infrastructure, and the way forward for the hydrogen economy.

With the concern about climate change and proposed solutions such as the Green New Deal that would phase out fossil fuels, there is question of how freight and passenger trains could still operate. While conventional rail electrification could work in Europe and more dense parts of the US and Canada, the investment cost of an electrified infrastructure in vast portions of both countries could be prohibitive. The answer could be hydrogen fuel cells.

While hydrail, that is hydrogen-fueled locomotives and self propelled railcars, hasn't got much press in the US, several hydrail projects have moved from the conceptual to demonstration phase in Europe and Asia. Hydrail includes both hydrogen fuel cells and combusting hydrogen in an internal combustion engine. Fuel cells are the more promising approach of the two because they can be a direct replacement for the diesel powered generators in a diesel-electric locomotive. The wheel's traction motors don't care whether the electricity comes from a generator or a fuel cell.

Hydrail vehicles would probably be hybrid vehicles in which electrical energy from the fuel cell and regenerative braking would be stored in batteries or ultracapacitors for use by the traction motors. Capturing the energy created during braking via regenerative braking rather than dissipating via resistors, the normal case today, reduces the amount of hydrogen that has to carried onboard the locomotive.

Hydrogen-fueled trains have a carbon-free footprint provided the hydrogen is produced by electrolysis using electrical power provided by wind or solar. Fuel cells do not emit anything but water.

One idea is to produce hydrogen track side in electrolysis plants along a rail line. This would be especially attractive in remote regions where there is ample room to build solar farms, or lots of wind for wind turbines. Since hydrogen can be easily stored, it can be produced whenever the sun is shining or the wind is blowing. Alternatively, if electricity comes from the electric grid, hydrogen could be produced during times of none peak electrical demands.

The state of hydrails today

Fuel cell technology is ready to be used in fuel cell powered trains. There are several fuel cell, 18-wheel truck projects underway with some with trucks already on the road. The technology could be transferred to hydrail applications. Toyota, working with Kenworth, is building 10 hydrogen fuel-cell Kenworth T680 Class 8 drayage tractors to reduce emissions at the Ports of Los Angeles and Long Beach. Anheuser-Busch has ordered up to 800 hydrogen fuel cell-powered Class 8 trucks from startup Nikola Motor Co. Engine manufacturer, Cummins, has shown a concept Class 8 tractor featuring a 90-kilowatt fuel cell. This fuel cell system is scalable up to 180 kilowatts.

Of course, the power of a freight locomotive is much greater than an eighteen wheeler - 2000 to 4500 kW versus 565 hp (about 420 kW) for Kenworth's hydrogen-fueled T680. Fortunately, fuel cell "engines" can be scaled up by adding more fuel cell modules.

Much larger fuel cell power plants are being planned for marine applications from research vessels to container ships. A fuel cell ferry and push boat are already under construction in Norway and France, respectively, as part of the FLAGSHIPS project. SW/TCH Maritime is building the Water Go Round e-ferry, a hydrogen fuel cell-powered ferry for deployment in San Francisco and New York City. PowerCell Sweden AB and Havyard Group ASA are developing a large fuel cell vessel that will service Norwegian fjords. It will use many 200 kW fuel cell system modules connected in parallel for a total output of 3.2 MW. PowerCell and Havyard Group say the first of the four ships should be operation in 2021.

The use of fuel cells to motivate passenger trains and shunting locomotives is less of a challenge than heavy freight locomotives as used in the US. Thus, in the over 20 demonstration of hydrail technology in 14 countries since 2005, most of the projects are people movers. However, in Topeka, Kans in 2009, BNSF Railway debuted its Vehicle Projects HH20B, a switcher-locomotive powered by hydrogen fuel cells producing 2000 hp (1,490 kW).

Alstom Transport's Coradia iLint, built in Germany, is considered to be the world's first hydrogen fuel cell passenger train. Two pre-production Coradia iLint trains began operating in Germany in September 2018. Deployment of fleet of some 60 trains is scheduled to commence in 2021. The current trains will be fueled at the world's first hydrogen train refueling depot with hydrogen generated on-site using wind power.

HydroFLEX, the first full-sized hydrogen-powered train in the UK, is currently being tested. It uses an existing Class 319 train set fitted with Ballard FCveloCity-HD fuel cells.

The province of Ontario, Canada has contracted with Alstom and Siemans to create concept designs for a self-propelled hydrogen-powered coach to be used on GO Transit lines in the greater Toronto and Hamilton area as an alternative to installing traditional electrification using overhead wires. It has also requested the design of a hydrogen-powered locomotive to pull GO coaches.