HomeAutomationHP Teams with Parallels on Virtual 3-D Workstation
Recent
Automation
Q&A With IndyCar Gearbox Expert Anna Chatten
May 13, 2022
Intel Unveils Trust Authority to Boost Security
May 13, 2022
Supplier News Looks at Highly Customizable Industrial Monitors
May 12, 2022
Here Technologies Maps are Key to Mercedes Level 3 Automation
May 12, 2022
POLL
'We Built the Domino's Pizza Tracker for Manufacturing'
May 12, 2022
Break Your Bubble Gum Habit by Watching Its Production
May 12, 2022
This Patch Monitors All Your Vitals, Including Blood Pressure
May 12, 2022
First E-Skin to Anticipate, Perceive Touch from All Directions
May 12, 2022 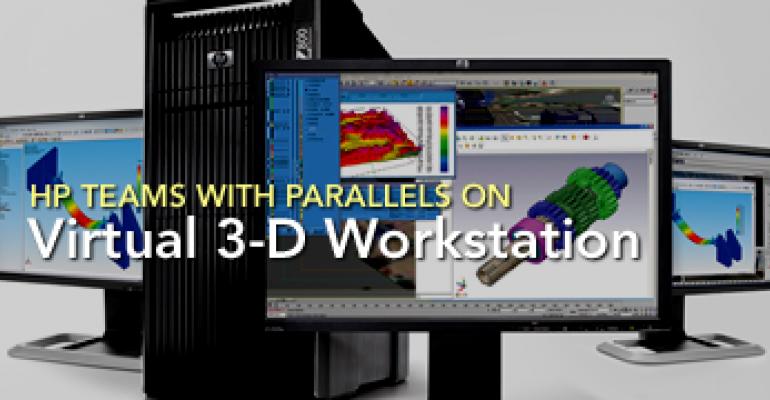 Hewlett-Packard is teaming up with Parallels on a high-end workstation virtualization solution that offers engineers near-native performance for resource-hungry applications like MCAD and CAE.

While virtualization technologies are all the rage on the server side, vendors have been hamstrung from delivering the performance and graphics acceleration in a virtual machine necessary for resource-intensive design tool applications, according to Bruce Blaho, an HP fellow and chief technologist for HP's workstation line. "You could virtualize, but it took an order of magnitude performance hit if you tried to run anything graphically intensive," Blaho says. "That essentially ruled out a virtual machine for CAD and CAE â€“ it was a non-starter."

Having a virtual machine capable of running multiple applications simultaneously has enormous appeal to engineers and designers, according to Blaho. For highly technical users, the ability to run two application stacks and environments at once means they could run an MCAD program in Windows while a CAE analysis application churns away on Linux running on the same physical hardware. "An engineer could be preparing a part in an MCAD system and then hand off the part to an analysis application running on the workstation in a virtual machine and start working on the next part while that analysis is crunching," he says. "By ping-ponging back and forth, you could double the productivity of mechanical analysis."