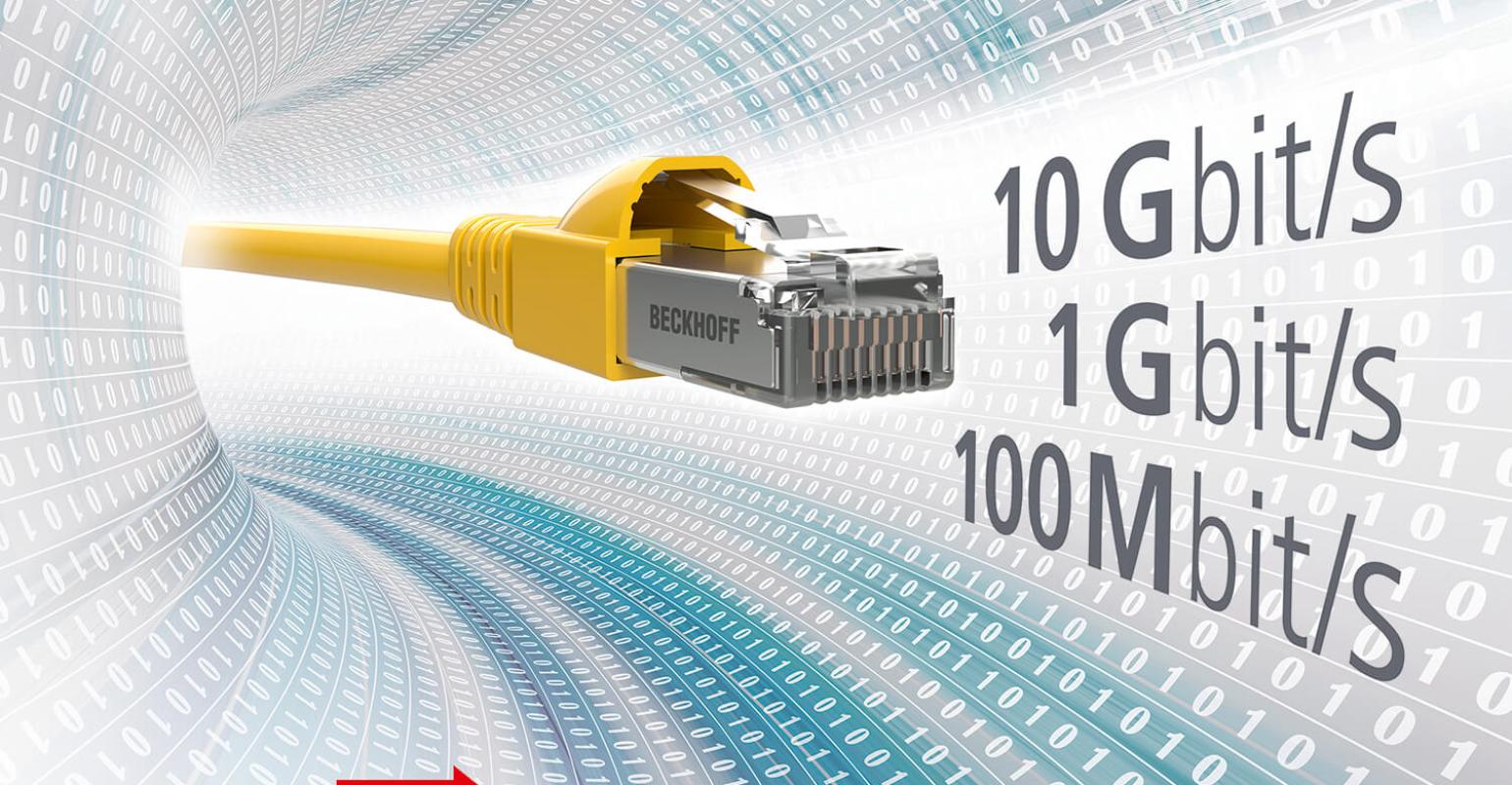 New EtherCAT G technology enables telegram processing on the fly at data rates up to 1 Gbit/s.

Potluri added that, beyond the increased communication rates, the larger benefit will be increased bandwidth. For example, Beckhoff EtherCAT measurement modules that support eXtreme Fast Control (XFC) and oversampling functionality provide 50 kilosamples per second at a resolution of 100 ppm. And if the networks use a large number of these modules, the bandwidth can fill up quickly in a standard EtherCAT network. However, according to Potluri, the 100 Mbit/s EtherCAT introduced in 2003 will continue to support numerous applications for machine builders and end users.

As far as applications are concerned, the idea is that EtherCAT G will extend rather than replace the capabilities of the 100 Mbit/s standard, and it will be possible to use both performance levels on the same network with the addition of a branch controller. Engineers will likely choose EtherCAT G when applications require both very high bandwidth and rapid responses, such as in systems that incorporate numerous motion axes, expansive condition monitoring systems or GigE vision systems.

Through the branch controller model, machine vision components could operate via EtherCAT G or EtherCAT G10 all the way to the EtherCAT master, for example, while separate slaves communicate via standard EtherCAT and connect to the main trunk via an EtherCAT G Coupler. Potluri added that the key is flexibility and the solution, with multiple tiers of communication speeds linked via interoperable branches, demonstrates that Beckhoff still has a long game for EtherCAT.

Higher Speeds, So What?

One reason that gigabit Ethernet hasn’t made more inroads in industrial automation up until now is that users have had questions about the benefits of higher communications speeds and its effect on throughput.

“In addition to preserving the core features of EtherCAT including robust diagnostics, distributed clocks and processing on the fly, higher communication speeds and throughput of EtherCAT G significantly decrease PLC cycle times,” Potluri added. “Control systems can be made even more powerful as a result, supporting more robust IoT implementations.”

All of this is crucial in applications where many GigE machine vision cameras are involved, such as for quality assurance or track and trace applications. An example would be pharmaceutical production, in which it is critical to quickly identify product defects using high-speed vision and reliably update databases to ensure consumer health and safety. Shorter cycle times will enable more rapid processing of large data sets in real-time. Propagation delay times and the network topology will determine the actual increases in data throughput and, therefore, decreases in cycle times, but the improvements will be quite impressive in any case.

One benefit of EtherCAT G technology is its implementation of a branch controller model that provides an ability to combine EtherCAT and EtherCAT G in a heterogeneous network.  This enables system designers to add-on EtherCAT G to an existing network with minimal disruption to current operations.

“The EtherCAT G branch controller model supports the principles of simplicity and high performance by providing exceptional flexibility in gigabit network topologies,” Potluri said. “However, EtherCAT still remains the dominant choice for the field level. Any machine or system can still enjoy the advantages of EtherCAT G without undergoing a complete rip and replace of network components.”

The existing flexibility of 100 Mbit/s EtherCAT to connect with legacy fieldbuses continues with EtherCAT G. This and the branch controller model make it possible to incorporate legacy networks and equipment using standard EtherCAT within the same topology as state-of-the-art vision systems and very large-scale motion control that would benefit from EtherCAT G performance.

The communication bandwidth and cycle times improve either way through the implementation of EtherCAT G, although the level of performance improvement depends on the scale of the retrofit or the amount of new equipment installed on the faster network. For example, a machine network with 128 daisy-chained servo axes would have a communication time of 237 µs over standard 100 Mbit/s EtherCAT. Using 1-Gbit/s EtherCAT G with eight separate segments of 16 servomotors, the communication time would decrease sevenfold to 34 µs. However, if the plant could not retrofit an entire existing system, it could still implement a main EtherCAT G trunk between the master and separate couplers, allowing segments of 16 axes to use standard EtherCAT.

In this type of application, the communication time would decrease to 49 µs, which is still a significant reduction from 237 µs. When EtherCAT G10 arrives, these types of reductions will be exponentially greater. Most importantly, EtherCAT users now have a flexible migration path that allows them to reap rewards in the future. The EtherCAT G branch controller model, combined with ramped up communication speeds and bandwidth, makes this possible.