HomeAutomationFusion Factory Is a Contained, Three-Part AM System for Metal and Ceramic
Recent
Automation
Will I See You at the Virtual 2022 RT-Thread IoT OS Global Tech Conference?
May 27, 2022
Novel Silk-Protein Eyed for Tendon Repair
May 27, 2022
NTT Data Powers Indy 500 Predictive Analytics
May 27, 2022
At NI Connect: More Companies Discuss Benefits of Test
May 27, 2022
POLL
Supplier News is Checking Out Programmable Automation Controllers
May 27, 2022
What's the Latest in Additive Manufacturing?
May 26, 2022
Top Gun: Maverick Roars into Theaters
May 26, 2022
New 3D Printing Technique Prints Glass for Microstructures
May 26, 2022

Fusion Factory Is a Contained, Three-Part AM System for Metal and Ceramic 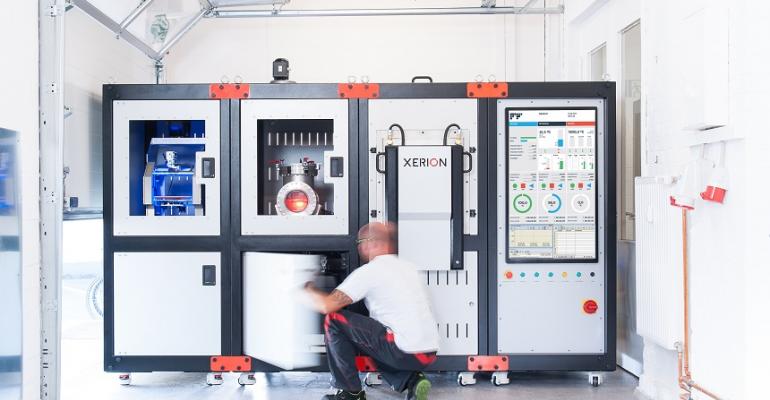 Fusion Factory offers the ability for the quick changing of multiple materials, including special materials with complicated handling requirements such as refractory metals, ceramics and magnetic materials.

Germany’s 20-year-old XERION began its life making furnaces for high-temperature industrial and research purposes. Its expertise in furnaces has benefited it for its latest offering, a three-part metal and ceramic additive manufacturing (AM) system that brings together and integrates the machines for all necessary technological steps --  metal filament-based 3D printer, a de-binding unit and a sintering furnace -- in a single system, with the addition of a control unit. The result, called Fusion Factory, is a complete process chain to print with multiple materials on a single platform.

Research to develop Fusion Factory began three years ago in partnership with the Fraunhofer Institute, an applied science research organization in Germany. The research and the development of an AM system was primarily driven by customer request. XERION exhibited the finished product at formnext 2018 in Frankfurt late last year.

It consists of a filament-based multi-material printer with two nozzles. The specially fabricated filaments made from metal or ceramic powder plus a binder are fed to a modified fused filament fabrication-based printer to create what’s called a “green part.” This process is no different from the one that is used to produce plastic models, with the exception of the special filaments and the specially designed printer nozzle and feed mechanism.

De-binding Station for a Chemical Bath

Once the part is printed, it heads to the de-binding station for a chemical bath. Ironic for a furnace manufacturer, XERION uses chemical rather than thermal de-binding because of the varying heat tolerance of a multi-material part. Fusion Factory uses acetone and isopropyl alcohol for its solvent-based de-binding process, which occurs within a nitrogen gas atmosphere. The solvent reacts with the materials on the surface, creating microchannels that distribute the chemicals into the solid matrix of the part, eliminating the organic compound from deep within and creating porous empty spaces. Most of the binder is eliminated this way, readying the fragile part for the next step, which is sintering.

The microscopic channels created during de-binding act as an outlet for the thermal vaporization of the remaining organic chemicals during sintering. The material is heated to extremely high temperatures (up to 1,500°C) within a nitrogen or hydrogen atmosphere (depending on the material), which causes the outer shell of the metal powders to melt and fuse in a process similar to welding. The resulting part is compact and dense, and while a slight amount of shrinkage occurs, this can be compensated for in the pre-printing design using software.

The process is highly contained to protect workers from the solvent, vapors and heat. The sintering process is done under a protective atmosphere, primarily 100 percent hydrogen. During part production, the user controls the three steps via the system’s touchscreen control unit.

The Quick Changing of Multiple Materials

One great advantage is the ability for the quick changing of multiple materials, including special materials with complicated handling requirements such as refractory metals, ceramics and magnetic materials. The result is strong, lightweight parts whose different materials can vary in porosity.

According to XERION’s founder and executive director Uwe Lohse, it’s the timing of the multi-material metal and ceramic part production that’s so compelling.

“The time of the complete technology run, from printing to the sintered part, is less than 48 hours,” Dr. Lohse told Design News. “The user has complete control of all three steps, printing, de-binding and sintering, and because it uses filament rolls, you can change material quickly.”

The onboard database management system enables the storage of pre-programmed “recipes” and automates the laborious task of working with multiple machinery, ensuring high quality and repeatability for manufactured parts. The system will also generate reports for each part that can be used for documentation purposes.

“The operator has a library of 99 de-binding and sintering recipes, said Dr. Lohse. “After finishing the process, the control unit stores all the data of the whole process according to lot number.”

The Future Will Include Copper, High Entropy Alloys, and Magnetic Materials

The result, according to XERION, is a process for creating prototypes or a small series of parts that is on par with metal injection molding (MIM) techniques. Additionally, companies that already own suitable printers can purchase the de-binding and sintering stations separately.

At the moment, said Lohse, Fusion Factory can produce parts made of alumina and zirconia, but the company ultimately plans to develop technology recipes for more materials such as copper, high entropy alloys and magnetic materials. It also plans to increase the number of nozzles.

“For printing with more materials and for a higher stability of long-term printing, we plan to increase the number of filament rolls and nozzles,” he said.

“Clients comes from all industries and are in contact with new materials,” said Lohse. “The aerospace industry is especially interesting for us, because the printing technology is also usable under zero gravity conditions.”