Ford Rolls Out Exoskeletons at 15 Plants 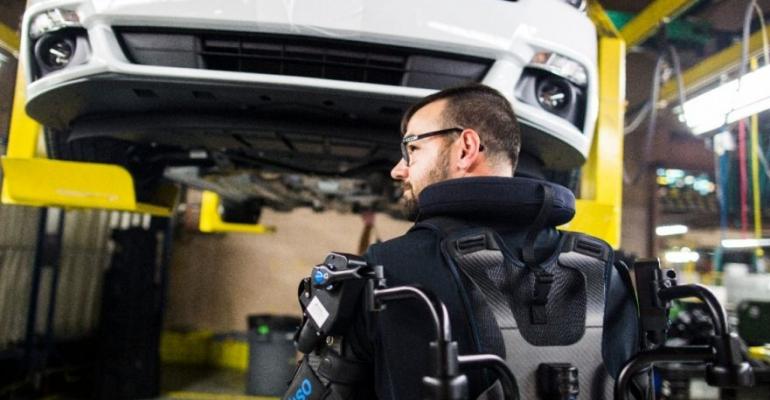 Ford has introduced exoskeletons from Ekso Bionics for workers at plants globally in a move to reduce worker injuries.

Exoskeletons have been around for years. But until very recently, they have mostly been a novelty on the plant floor. Now, advancements in exoskeleton technology are changing that dramatically. As of 2018, global shipments stand at seven thousand units with a global hardware revenue of $192 million, according to ABI Research.

The advantages of exoskeletons are getting demonstrated in the real world of manufacturing. Ford Motor Company employees who perform repetitive overhead tasks are now receiving assistance from an upper body exoskeleton, the EksoVest from Ekso Bionics. According to Ford, since 2005, incidents at global facilities that resulted in lost time fell 75 percent. The company is looking for 2018 to be one of its safest years.

Ford is using the exoskeletons to reduce the physical toll on employees during the vehicle assembly process, lessening the chance of worker fatigue, injury, or discomfort. “There is a definite aging workforce in manufacturing. We saw a need for an exoskeleton in the auto industry, where there are a high number of injuries to the shoulder,” Kevin Dacey, senior mechanical engineer at Ekso Bionics, told Design News. “Workers are lifting drills 4600 times per day, more than a million times per year. It wears out the shoulder and damages the rotator cuff. We address the issue with the upper body exoskeleton.”

Ford's Help in Developing the EksoVest

Ford partnered with Ekso Bionics to enhance this wearable technology that elevates and supports a worker’s arms while performing overhead tasks, such as reaching up with a power tool to screw bolts that secure the car’s brace—all while standing underneath the vehicle. “We went to Ford early on with a pre-production unit and tried it out with some of their workers,” said Dacey. “They gave us feedback, so we modified it to make it more comfortable and to test out some additional functions. We wanted to give the workers what they wanted in an exoskeleton.”

Ford piloted the EksoVest at two of the company’s Michigan assembly plants during the past year. According to Dacey, feedback from plant operators helped refine the technology before the company rolled it out globally. Ford is now using the EksoVest in seven different countries, including all of the facilities in the US. Workers use the vest on a voluntary basis.