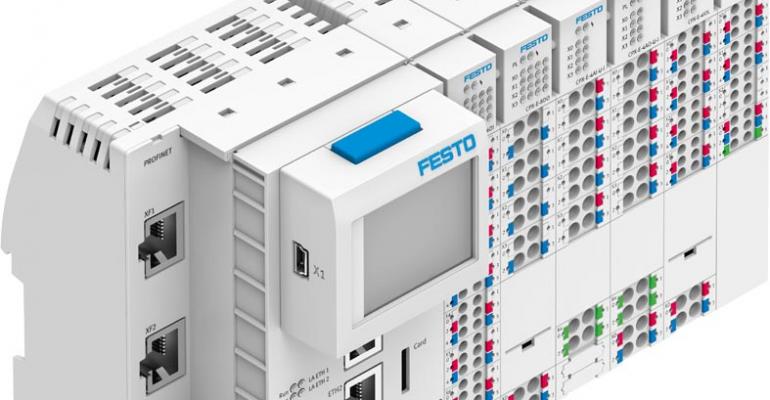 CPX-E platform allows machine builders to control up to 16 servo axes from one master controller.

Introduced this week at Pack Expo, the CPX-E modular controller is targeted at linear motion applications employing multiple servo drives. “This is a game-changer in terms of synchronized control of servo motors in the field,” John Holmes, sales director for the food and packaging industries at Festo, told Design News. “It allows OEM machine builders to control up to 16 different axes of servo control, from single-phase 350-Watt motors all the way up to three-phase, 250-kiloWatt motors.”

The new platform is said to be well-suited for a variety of applications. Festo said it could be incorporated into automation systems, such as packaging machines, palletizers, and soldering systems. It could also serve in handling machinery—such as parts handlers, assembly systems, dispensing machinery, and gluing systems. Holmes said it could even serve in the auto industry for construction of automated machinery for the assembly of printed circuit boards and headlights.

Designed as an EtherCAT master controller and motion controller, the CPX-E is said to work in plug-and-play fashion with such components as sensors, cameras, and human-machine interfaces, as well as electric and pneumatic servo motors and drives.

“The beauty of this is it allows the engineer to synchronize all the drives off one master controller,” Holmes said.

To be sure, other suppliers have offered the capability of synchronizing multiple servos off a single I/O platform. Such systems, however, have typically required machine builders to get their components from multiple suppliers, Holmes said. “Here, instead of having to go to different companies, they can get the pneumatics, they can get the servos, and they can get all the digital I/O from one technology provider.”

Holmes added that the turnkey nature of the package translates to benefits in terms of machine-building time and economics. “It’s about convenience and cost,” he told us. “You’re going to have a lot of cost savings with this platform.”