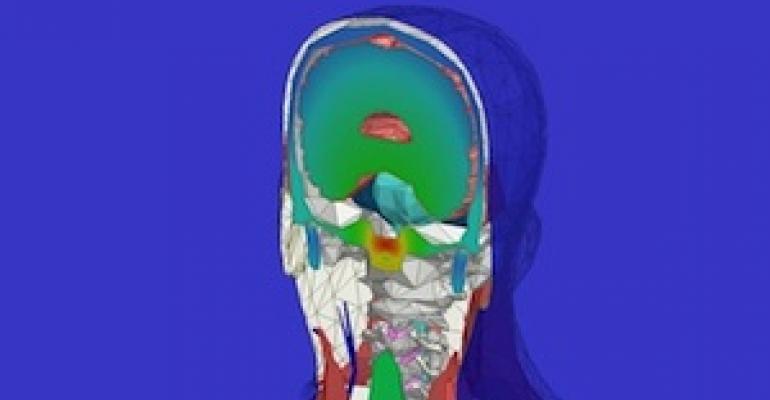 Engineers building electromagnetic applications for the healthcare industry just got clearance to use ANSYS simulation software as part of their process for evaluating whether biomedical device transmitter designs are compliant with Federal Communications Commission (FCC) standards.

The FCC ruled that ANSYS' finite element method (FEM) is considered a valid technique to simulate a medical device that must communicate with other similar devices. As a result, medical equipment manufacturers can tap ANSYS' HFSS GB pound software and leading FEM electromagnetic field simulation method to evaluate the RF emissions and Specific Absorption Rates (SARs)of transmitter designs in a digital world instead of having to manually build and test physical prototypes. The move will enable medical device developers in this field to reduce development time and costs without jeopardizing their requirement of meeting safety standards.

While the FCC has recognized competing simulation methods, this is a first for ANSYS. ANSYS petitioned the FCC to grant a waiver to the Medical Device Radiocommunication Service rules to permit FEM to be used to evaluate medical implant or body-worn equipment and to be recognized as a sound engineering technique. ANSYS' HFSS GB pound software lets engineers design, simulate and validate the behavior of complex high-performance RF, microwave and millimeter-wave devices in next-generation wireless devices, biomedical devices, consumer electronics and defense communications systems.

For engineers in this space, the ruling means more freedom. "Now engineers have more choices in how they want to validate their prototypes," explains Martin Vogel, ANSYS senior application engineer. Engineers can either opt for the traditional route, which requires them to build a physical prototype in a lab, measure it and send the results to the FCC, or they now have a wider range of digital simulation methods to choice from. "They now have a wider choice of methods and if they choose simulation, they can work with the software they like best," Vogel says. "And simulating a prototype in the computer is often a lot cheaper than building and measuring a physical prototype in a lab."

The FCC ruling applies to transmitters that are placed inside or in close proximity to the human body. It's a scenario that's more common with today's sophisticated medical implants, which frequently employ transmitters to communicate with other devices, usually to transfer physiological data to a doctor via wireless communication. Developers of medical devices have to ensure their equipment meets radio frequency (RF) emission safety standards as well as that it complies with SAR regulations, which is a measure of how the body absorbs energy when exposed to an RF electromagnetic field. ANSYS' software can used to verify both SAR and RF emissions.
0 comments
Hide comments
Related
You Might Like