Expert Tells Robot Makers to Focus on the ‘Good’ of AI 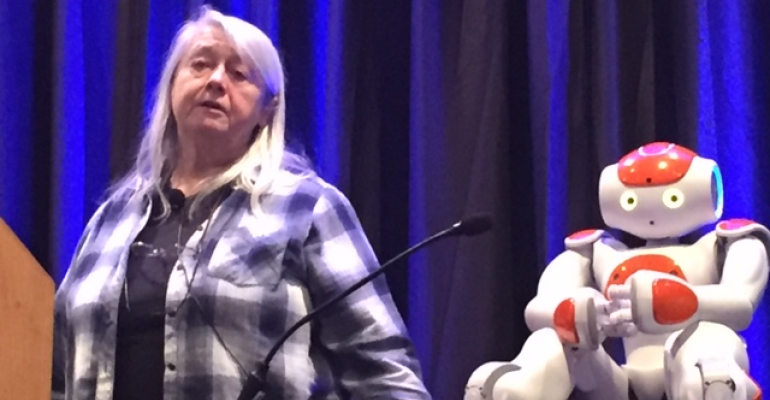 Engineers should concentrate on building "ethical robots," and not get too hung up on the potential threats of artificial intelligence, a robotics expert told attendees at ATX Minneapolis last week.

Maria Gini, Distinguished Professor of Computer Science and Engineering at the University of Minnesota, said that the key to the success of intelligent machines is for their makers to use their imaginations in ways that benefit society. “Are robots going to take over the world and are we going to be slaves?” Gini asked. “Who knows? But if we focus on the bad things, we’ll never do anything. We need to focus on the good things we can do.”

In a speech that examined a wide range of ethical issues surrounding artificial intelligence, Gini cited numerous examples of intelligent technologies offering the potential to make life better for humans. Those included a therapeutic robot baby seal known as Paro, a programmable humanoid robot called Nao, and a four-legged running robot called BigDog, as well as Siri, Alexa, Google Home and autonomous cars. To call attention to that potential, she brought a Nao robot, which stood up and danced to the song, You Should Be Dancing, drawing laughter and cheers from the crowd of approximately 100 engineers.

Gini emphasized that solutions for the greater good can often be very simple. She cited an example of women in Africa who use GPS-based cell phones to connect to women in other villages, enabling them to walk together in groups, instead of walking alone in the dark.

“You don’t need to come up with anything very complicated,” Gini said. “Think about Paro, the baby seal robot. It’s simple to do. Does it make anyone rich? Probably not. Does it make some people happy? I’d say so.” To drive home the point, Gini showed a video of nursing home patients smiling and communicating after a visit from Paro.

Gini acknowledged that robots have the potential to take jobs, particularly in industrial and agricultural settings. Robots, she said, can pick apples, oranges and strawberries, drawing jobs away from willing workers. “Some people will be upset,” she said. “But some of those aren’t very good jobs. We need to get people trained to do different jobs.”

The key to using artificial intelligence for the greater good is to understand what it means for robots to be ethical, Gini said. She cited examples of technology companies – including IBM, Google, and Amazon – that are studying and defining what it means for machines to operate ethically. From those studies, roboticists have learned that ethics vary from person to person and culture to culture. That’s why transparency is important, she said.  “We have to make our algorithms more open, more self-explanatory,” she told Design News. “That’s a good first step – ensuring that there are no biases hidden in the decisions.”

Gini added that such efforts don’t guarantee that the technology won’t be used in harmful ways. But doing nothing, for fear of social threats, would also be wrong, she said.

“A lot of the solutions are very simple,” Gini concluded. “And because we are all experts in technology, we should be asking, ‘What can I do to help the world?’”