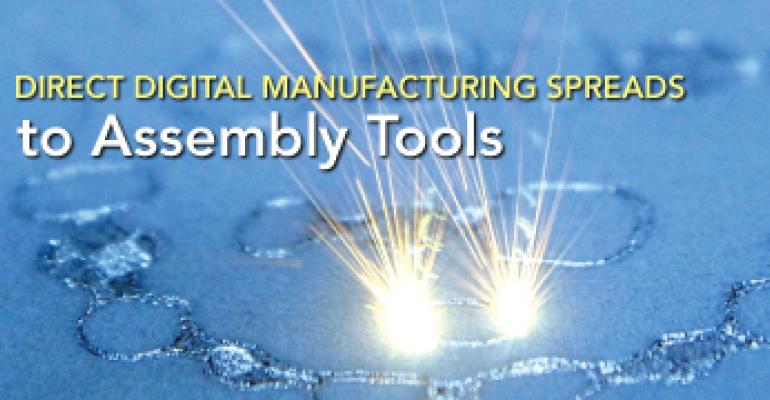 Additive fabrication technologies originally developed for rapid prototyping are making strong inroads into the manufacturing arena, especially for assembly applications such as tooling for jigs and fixtures.

NASCAR's Joe Gibbs Racing (JGR) uses additive fabrication technology to custom produce scoops that permit efficient air flow into an internal duct for cooling purposes. The ducts were originally developed by the National Advisory Committee for Aeronautics and are referred to as NACA ducts.

The polypropylene parts are first vacuum formed and then positioned in a custom fixture and trimmed to size with a waterjet cutting machine.

The technical team had other options when reviewing processes to make the fixture. "We didn't even give CNC machining a second thought," says Mark Bringle, JGR's technical manager. "It was obvious that FDM (fused deposition modeling) was our best option. Just one look at the fixture and we knew that it would be too much work and take too much time to get it milled on one of our CNCs."

The day after process selection, JGR made two custom fixtures using the fused deposition modeling technology from Stratasys, Eden Prairie, MN. "After the meeting, we had our designer draw it up, and we popped two out the next morning."

To make two FDM fixtures, the total lead time was less than one day and the cost was only $525. The entire process was completed with only one hour of direct labor. The estimated cost to machine two fixtures was $2,550. Bringle attributed much of the expense to the fixture's deep pockets.

Material is applied in layers directly from a CAD file in the fused deposition modeling and other additive fabrication technologies. In the case of FDM, a plastic filament or metal wire is unwound from a coil and supplies material to an extrusion nozzle which controls the flow. The nozzle is heated to melt the material and can be moved both horizontally and vertically.

Several materials are available for FDM with different trade-offs between strength and temperature properties. FDM can be used with ABS, polycarbonate, polycaprolactone, polyphenylsulfone (PPS) and waxes. The material used to make the fixture for the racing duct is ABS.

As reported by Design News, the process is also widely used to make jigs and fixtures for vacuum cleaners by Oreck. In another racing-type application, Roaring Forties' autos uses additive fabrication services from Stratasys' Red Eye on Demand to make tools for a fuel line that are used as a fixture for aligning assemblies and as a "go/no go" gauge.

"Being cost-effective we now use a number of jigs during assembly where we used to have none," says Paul Bottomley, a co-owner of Roaring Forties. "It saves us many man hours during a build but also improves on quality. Located in Australia, Roaring Forties makes replicas of the Ford GT40, a high-performance racing car that was built from 1966 to 1969.

BMW is also making widespread use of FDM to make jigs and fixtures at its plant in Regensburg, Germany as an alternative to various steel-cutting processes. One example is a convoluted tube that bends around obstructions and allows placement of fixturing magnets exactly where needed in the production of bumper supports.

CAD-driven rapid prototyping technology was invented in 1986 by Charles W. Hull when he developed stereolithography, in which a CAD-driven laser etches patterns in photo-curable polymers. He is still the chief technology officer of 3D Systems, now located in Rock Hill, SC. In 1987 a student at the University of Texas named Carl Deckard was developing a technology called selective laser sintering in which a high-power laser fuses small particles of plastic, metal, ceramic or glass powders into a three-dimensional mass. Deckard's idea was commercialized by DTM, which was purchased by 3D Systems in 2001.

A German company, EOS, developed its own selective laser sintering technology and is now a major supplier.

Systems were originally developed to make prototypes quickly. Industry experts agree most future growth; however, will come from application of the technology to low volume, complex parts for manufacturing. As a result, the industry now is often referred to as "additive manufacturing" as opposed to "rapid prototyping."

Development of new materials, including high-end engineering thermoplastics, that can be used with some of the systems will surely accelerate the move to digital manufacturing.

Technology announced by 3D Systems and partners at Rapid 2009, held May 12-14 in Schaumburg, IL, also show the tremendous potential of additive manufacturing. Hull worked with Scott Turner, president of Scicon, a service bureau, to develop MQast(TM), a process that can create intricate, bending channels and very tight tolerances from fully dense aluminum or stainless steel. One use could be tiny fluid-carrying channels in the tips of jaws manufactured for surgical instruments.

"This should really open up design," Turner told Design News. "We don't want engineers to think about the constraints of a process. We want them to develop the best possible design and then tell us to make it."

Turner and Hull declined to discuss specifics of the development, but said patents would be filed.

Developments disclosed by EOS also demonstrate the opportunities for the technology. As many as 500 bridges and crowns can be manufactured from cobalt-chrome in a day in a single build on an EOS direct metal laser sintering system. In fact, EOS expects to ship 20 machines for dental applications in the next 18 months. Dental implants traditionally have been made via casting, a process that allows technicians to produce just 20 dental frames per day.

Cost of materials remains a restraint for the industry. One resin for a specific process, for example, is cited at $30/lb, more than 10 times a typical engineering thermoplastic. That ensures that at least for the short-term, the technology will only be applied where it provides the most return. In addition, high-end machines can be expensive, well over $500,000. In some processes, surface finish is not Class A. For that reason, assembly applications may be a primary target because glossy surface finishes are not required.

Other fastening applications are also possible with additive manufacturing.

A demonstration component at the Stratasys booth at Rapid 2009 showed a fastener embedded in a housing fabricated with fused deposition modeling. The fastener can be placed in a component midway through fabrication, taking advantage of the ability to stop and re-start the machine. It's a concept similar to insert injection molding. With additive fabrication, you not only have the benefit of a metal fastener in a plastic construction, you also have the ability to make an extremely complex design with internal elements, including channels.