Sometimes (maybe most of the time), when it comes to design, simplest is best. That’s especially true when creating utility devices for off-the-grid environments in developing countries, where users are not necessarily skilled and there is little available technical support.

Yet that is where some of the most serious problems are and the need for bulletproof designs is arguably highest. Consider the fact that 1.5 billion people around the world have no electricity and 750 million people lack access to clean water. They also have little, if any, money.

Eden Full, a mechanical engineering student at Princeton University, won a 20 Under 20 Thiel Fellowship with a clever idea to address these two problems simultaneously. She took time off from school and started a company called SunSaluter, named after the device she invented.

The SunSaluter is a water clock-driven solar tracker. It takes in dirty water on one end, which powers and controls the rotation of the solar panel as water passes through, and puts out purified water at the other end. The patent-pending technology “uses controlled weight displacement to rotate a solar panel to follow the sun from east to west — a process also known as horizontal (azimuth) solar tracking," according to Full. 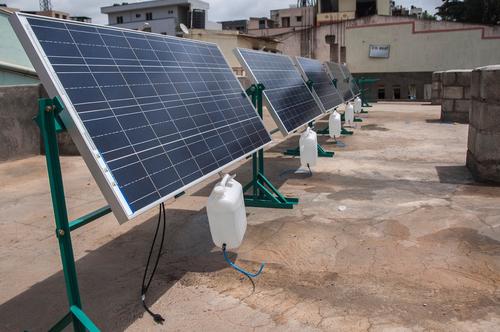 Single-axis tracking has been found to improve the performance of solar photovoltaic systems by 30% compared with stationary panels. But sophisticated, motor-driven trackers would not be practical in these environments.

The SunSaluter consists of a frame with a pivoting element to which a solar panel is attached. One reservoir, which receives the output, sits on the ground, while the other reservoir, which contains the input water, hangs off the solar panel and is balanced by a counterweight.

The operation could be compared with sitting across a seesaw with a big bag of water that has a leak. It starts out heavier than you, which means you are up in the air. Eventually, as the water drains out, you are gently lowered to the ground.

The flow rate in Full’s device is calibrated upon installation by means of an adjustable valve, which synchronizes the rate of rotation with the movement of the sun. The process is initiated by filling the input reservoir at sunrise each day.

It’s almost as simple as that, but after observing the way the first units were utilized in the field, Full and her team knew that they had to make it extremely simple to use and completely reliable. Between those modifications and others to reduce cost and weight, the team iterated the design some 60 times.

For example, the initial design used empty soda bottles as the reservoirs. While that seemed like a good idea, it had a couple of problems. First, it required a rate control valve machined out of aluminum, which added cost. Second, the bottles had to be inverted to be filled or adjusted, which made use difficult. So the bottles were replaced with flexible water bags.

Each SunSaluter unit will provide electricity, depending on conditions and the solar panel used, and four liters of clean water per day. Future models are expected to have higher water flow capacity. 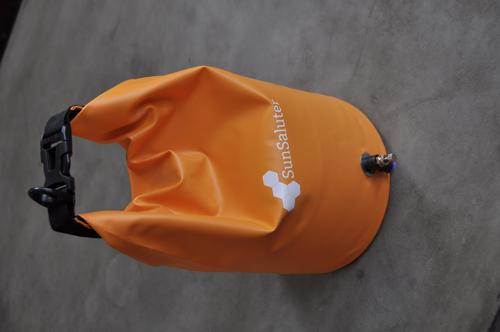 The latest design costs half of what the original did and about 30 times less than a motorized tracker while being far simpler to use.

The company, which is registered as a 501(c)(3) nonprofit, has deployed 140 units so far in 16 different countries. Its primary manufacturing site is in Bangalore, India, and its distribution partner, RECAPO, is in Lilongwe, Malawi. Full told Design News, “We have a track record now that proves that SunSaluter's technology works, and it really makes a difference in the places that it has been deployed.”

SunSaluter plans to have 1,000 units in the field by the end of this year and 10,000 next year. Units are available either as kits or in pre-fabricated form.

According to SunSaluter COO Jake Schual-Berke, the company is looking for partners around the world to bring the device to new markets.