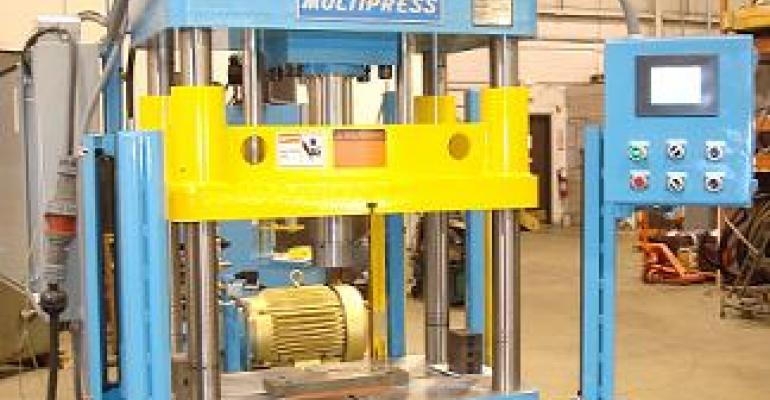 Multipress Inc., a Columbus, OH manufacturer with a 50-year history of producing custom presses for the metalworking industry, was recently contacted by a customer with a requirement for a 50-ton deep-draw press. In this new application the customer specifications included:

To help with system design, Barney Raye, president of Multipress and Rick Snyder, Mulitpress's electrical engineering manager, worked with Advanced Industrial Products Inc. (AIP), a hydraulics distributor with which Multipress has worked on multiple press development projects in the past.

Connecting and Controlling
To connect the motion controller to the system components in the new press, an analog feedback signal system is provided to the Delta controller for precise control and troubleshooting. Of the two motion axes supported by the RMC75, axis 0 is used for closed-loop pressure control of the hold down (clamp) cylinders, while axis 1 is used for position/velocity control of the main press ram. The motion controller uses additional analog interfaces for pressure monitoring of the main ram and open loop joystick velocity and directional control of the main ram. Eight digital I/O interface lines were used by Multipress for handshaking with the system PLC to coordinate overall machine operations.

Controlling pressure is a critical element of this design because variable pressure must be applied by the clamping cylinders to avoid damage to the work piece during the press cycle. Even though the primary mode of control of the main ram is based on the position and velocity of the ram piston, pressure monitoring of the main ram hydraulics is also needed to ensure that the correct amount of pressure is applied through the metal forming die.

Tuning the motion axes was facilitated by the RMCTools software package included with Delta's motion controller. Using RMCTools' scale and offset Wizard and Wizard for automated position tuning, both the closed loop pressure control axis and the closed-loop position/velocity control of the main ram were reportedly set up and tuned in two hours.

Since the AIP and Multipress engineers had never before implemented an open-loop joystick control interface, they chose to use the programming and simulation capacity of the Delta RMC75 to test the motion control program before connecting the hardware. The joystick control is used to operate the main ram used in part setup and rework.

Operations Design
For normal automatic press operations, a one-step repeating program is provided that Multipress machine operators can call up with an input from the human-machine interface (HMI) that is confirmed in the PLC. The PLC downloads all pressure settings; position setpoints corresponding to hold down pressure settings and position setpoints for closed loop main ram position control. The motion controller program uses variables so that different position or pressure setpoint values can be selected via the HMI. An operator can push a single button on the HMI to cause a new set of hold down pressure settings and ram position settings to be loaded for production changeovers. Another button on the HMI enables the change between automatic and joystick modes.

To support the joystick interface, Multipress programmed an "open loop rate" command that uses the analog feedback of the joystick (+/-10VDC) as the rate control for the main ram when under joystick control. The joystick can be seen in the lower right hand side of the press bed by the post in the photo.

For the HMI, Multipress and AIP chose the Automation Direct C-More EA7-S6C programmable touch panel. The HMI connects to the Ethernet interface provided on the RMC75E motion controller. This interface had been used on other Delta systems by Multipress and a downloadable program example was available in the large sample code library on Delta's Website. Use of this software reduced the engineering time necessary for screen setup and programming.

Based on the success that was achieved with this project, Multipress will continue to standardize on Delta RMC controllers for future closed-loop motion control applications.
TAGS: Materials
0 comments
Hide comments
Related