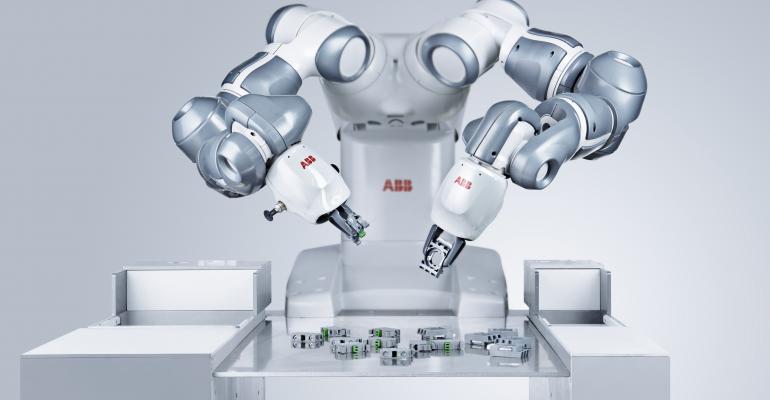 <p><u><a href="https://new.abb.com/products/robotics" target="_blank"><strong>ABB Robotics</strong></a></u></p><p>ABB manufacturers YuMi (shown above), along with other lines of collaborative and industrial robots. What's most notable about YuMi in this case however is that the robot can be controlled using ROS.</p><p><em>(Image source: ABB Robotics)</em></p>
A new collaborative dual arm robot named YuMi uses a unique mechatronic design and innovative motion control to eliminate the need for barriers, cages, and software safety zones.

A new collaborative dual arm robot named YuMi uses a unique mechatronic design and innovative motion control to eliminate the need for barriers, cages, and software safety zones. In developing the new design concept, aimed at making automation technically and economically feasible for small parts assembly, the goal was to automate cells that can coexist with both manual work cells nearby and implement an inherently safe environment when interacting with human workers.

YuMi’s design is based on a revolutionary integration of motion control software, speed-limited hardware, reduced weight, a compact frame, and 14-axis agility. Lightweight, padded magnesium arms can cease operation in milliseconds if necessary, in the event of an unexpected collision, for example, while cameras embedded in its integrated hands monitor the immediate environment. The combined effect is to ensure the safety of human coworkers on production lines and in fabricating cells.

“The soft padded dual arms and the lightweight design contribute to the overall safety of the robot’s co-workers. The design of the robot makes humans feel safe and comfortable.”

“Put simply, in the unlikely event of a safety failure, the physical robot including its grippers is incapable of causing harm,” De Keijser said. “Moderate robot speeds also allow time for human reaction to avoid collision.”

YuMi is what ABB claims is the world’s first inherently safe, collaborative, industrial robot. Its inherently safe design has been classified as a global certification by UL.

Dual arm technology used in the design of the robot offers many advantages for assembly applications. It enables flexible fixturing within an assembly cell, as one arm can be used as fixture while the other manipulates the part, and also allows for guiding of flexible parts. Another key is that YuMi enables high throughput in a collaborative manner with its small footprint, speed, and precision/accuracy to thread a needle.

The robot’s inherently safe design is intended to eliminate the need for fencing, caging, or other barriers, and its servo gripper hands can easily locate and then direct the grippers to pick parts. Real-time algorithms set a collision-free path for each arm, customized for the required task. Padding protects coworkers by absorbing force if, in the unlikely event, contact is made.

“If the robot encounters an unexpected object, the slightest contact with a human coworker for example, YuMi can rapidly diagnose the change in its environment and, if necessary, register the overload, shutting down the motion within milliseconds to prevent injury,” De Keijser said.

If YuMi senses an unexpected impact, such as a collision with a coworker, it can “pause” a motion in progress within milliseconds, and the motion can easily be restarted again. Additionally, the robot can rapidly diagnose changes in its environment and, if necessary, register the overload, shutting down its motion within milliseconds to prevent injury. When this is combined with the floating padding, safety for a human coworker is drastically increased. Even with its inherent safety features, the robot is precise and fast, returning to the same point in space over and over again to within 0.02 mm accuracy and moving at a maximum velocity of 1,500 mm/sec.

YuMi was specifically designed to meet the flexible and agile production needs required in the consumer electronics industry, and increasingly in other market sectors, ABB has developed a collaborative, dual-arm, small-parts assembly robot solution that includes flexible hands, parts-feeding systems, camera-based part location, and state-of-the-art motion control. It is also very suitable, through the use of its hand cameras, for inspection and test applications.

“Since its global market introduction nearly two years ago at Hannover Messe, YuMi has been successfully deployed by numerous small parts assembly manufacturers and is increasingly becoming the choice of customers in industries such as toys, wrist watches, and writing pens, to name a few,” De Keijser said. “Packaging applications for YuMi are widespread, including kitting of multiple components into packages, component assembly and packing of fragile materials.”

Leveraging its flexibility and ability to be deployed rapidly, YuMi can support and augment the capabilities of skilled workers from SMEs to large corporations particularly at repetitive and dull tasks. We expect this kind of interaction between man and robot to continue as new applications emerge every day in more and more industries.

De Keijser said the “new norm” of small parts assembly is lower product volumes, shorter product lifecycles, shorter lead times, and a growing trend to customize goods close to final markets. A collaborative robot’s extreme versatility enables it to adapt to changes in the production environment in much the same way a high-value employee does, by quickly repositioning and learning new tasks. The new thinking is that collaborative robots will radically change the way the industry thinks about assembly automation.

As robot systems and solutions are simplified, they will become easier to install, commission, and program. A good example of simplicity is lead-through programming, which allows the robot to be taught to complete tasks by operators by simply moving its arms which a wide range of customers can do -- from the largest automakers to a local baker.

De Keijser said improvement in the ease-of-use and programming of collaborative robots will be one of the main drivers of more widespread adoption. This will go hand-in-hand with advancements in computer vision, artificial intelligence, and sensor technologies which will give robots better abilities to perceive and feel their environment.

“Customers today want robot systems and solutions that allow man and machine to work in greater proximity to one another, that are simple and easy to use and provide effective plant management,” De Keijser said.

With that in mind, ABB has identified three growing trends in robotics which they believe will shape the way all robots will be used in the future: collaboration, simplification, and digitalization. Today, thanks to their flexibility and ability to be deployed rapidly, collaborative robots support and augment the capabilities of skilled workers from small and medium enterprises, or as they are often referred to as SMEs, to large corporations particularly at repetitive and dull tasks.

De Keijser said this kind of interaction between man and robot will continue as new applications are emerging every day in more and more industries. The second trend of simplification will make installation, commissioning, and programming of robots easier. A good example of simplicity is intuitive programming, which anyone can do. Finally, effective plant management will be dependent on digitalization, or the ability to unlock the power of the Internet.

In the year since YuMi’s, the team at ABB has been learning more and about the potential of this technology.

“YuMi enables leaner automated assembly and material handling systems while still managing complex applications. The cost benefits associated with this are unlocking the potential for this type of automation to be rolled out for many assembly applications where the return on investment was not favorable with more traditional automation technology. In addition, we see many small to medium enterprises starting to invest in automation for this very reason,” De Keijser said.